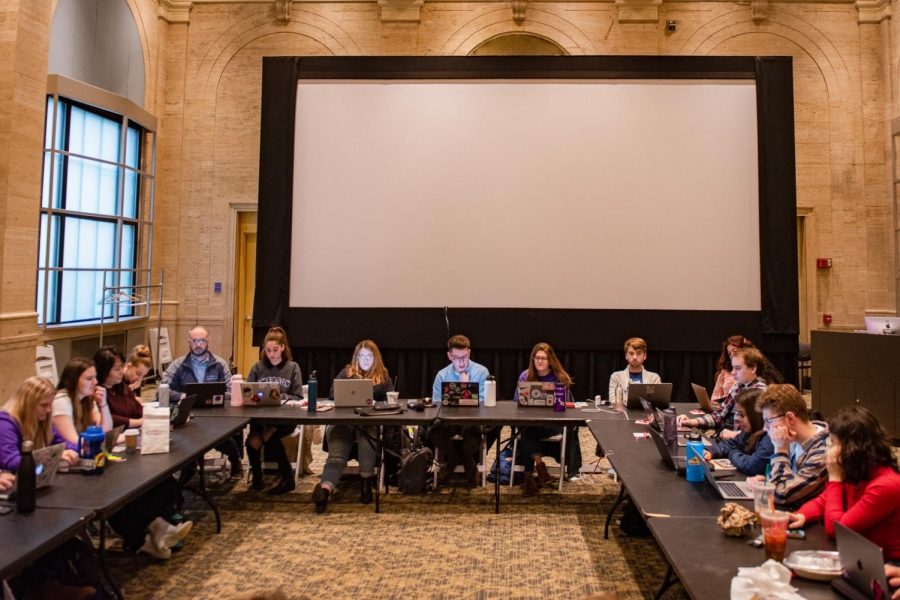 A joint session held in the Bill Bordy from earlier this spring semester.

The Student Government Association unanimously approved two appeals totaling over $55,000 from the Emerson Recognition and Achievement Awards and The Berkeley Beacon at their weekly joint session meeting Tuesday.

The ERA Awards appealed for $41,799—$25,565 of which will go toward the purchase of a new lighting rig for their annual awards and WECB’s spring concert. The remainder of the request will be allocated to other aesthetic improvements for the annual show.

The Beacon’s appeal totaled $15,042 and will be used to purchase new camera equipment, a new printer, a refrigerator for its staff office, and a Blackmagic Switcher, which would allow for remote live streaming.

“As the leading source for local content at an institution recognized as a visionary in the world of communication, it is important for The Beacon to have access to this cutting-edge technology,” Managing Editor for Operations Dylan Rossiter said in a statement. “This is not just an investment in The Beacon’s future but an underwriting of the next generation of world-class storytellers.”

Both appeals, which passed through the Financial Advisory Board with relative ease last Thursday, required joint session confirmation as they both exceeded $5,000.

Anthony Allocca was unanimously appointed to the role of LGBTQ+ commissioner. He told The Beacon the role will be a great opportunity for him to get involved on campus and help those who may not feel comfortable become more acclimated.

“I [want] to work with a lot of the orgs on campus and see what I can do to better service them,” he said. “Just to make sure that anything that is their concern, issue, or worry that I can service them.”

Joint Session appointed Thea Nagle to the Social and Events Director position. Nagle was not in attendence, but Executive President Will Palauskas read a statement Nagle prepared for the meeting.

“I think the perfect way to help bridge the gap between the students and SGA is to host fun and popular events that are centered around enjoyment but also include several performative aspects,” the statement read.

Senior Lecturer Heather May came to Joint Session for a discussion with SGA members regarding her role in the Emerson College Chapter of the American Association of University Professors.

She mainly discussed directed studies—courses that professors meet one-on-one with students to focus on a particular area of study not found in the college’s course offerings.

“We see it as a mission to make sure we’re always fighting for the best educational experience we can give you at Emerson,” she said. “The number one thing that has come up in the past year is, in what appears to be a unilateral decision by the administration, faculty are no longer being paid for taking on the directed study.”

The college used to pay professors who lead a directed study course $400, according to May. The administration stopped paying professors for their work in directed studies without explanation this academic year.

May said during the meeting that ECCAAUP will advise its members to discontinue directed study courses beginning next semester if the college continues to not pay professors for their roles in these courses. The college has not told faculty what the money previously used for directed studies is being used for.

Executive Treasurer Abigail Semple’s proposal for the creation of a Financial Equity Board was not on the agenda for joint session, despite Semple telling The Beacon last week that they would vote on the proposal during Tuesday’s meeting.

When asked after the meeting, Semple declined to comment on what changed but pointed towards Joint Session’s packed agenda. It still remains unclear when the proposal will receive a vote.