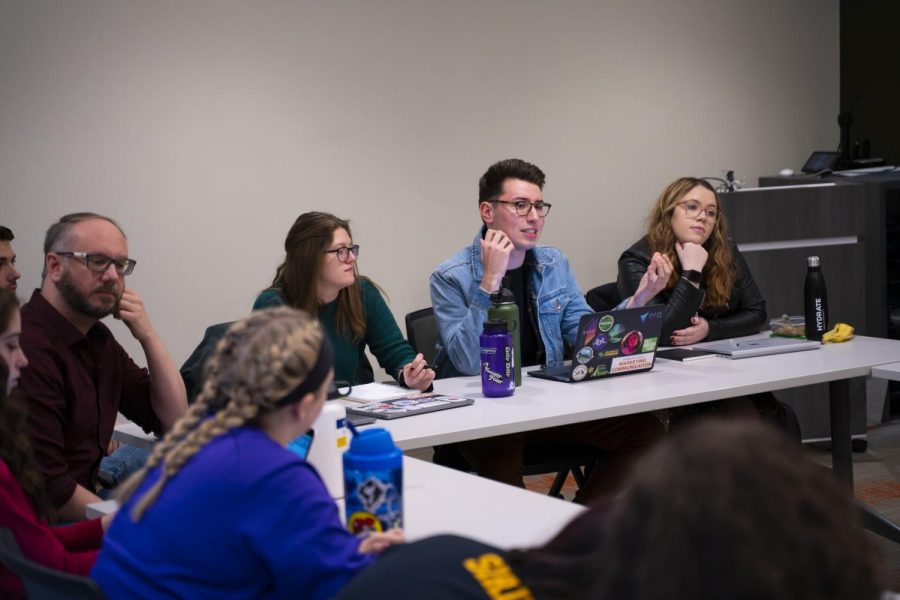 The act will serve as a test of the organization’s new legislative model, which aims to have SGA take a more active role in making change at the college. The model, curated by the previous semester’s executive board, places great emphasis on passing legislation designed to charge administrators with changing college policy. In the past, SGA could only amend their own policies and had no formalized structure to propose changes to college policy.

It remains to be seen if legislation will have any power in influencing college policy.

Former Chief Justice Joseph Johnson, part of the executive board responsible for overhauling the organization’s constitution, said he believes legislation will force the college to take recommendations from SGA more seriously.

“If you make it a piece of legislation saying ‘this is what we want, this is legislation from the student body,’ it takes more precedence, and it’s taken way more seriously from administration, [the] Board of Trustees, et cetera, because they see it as an actual formal document from a governing body of students,” he said. “That’s what our hope going with the legislative model was.”

Spectrum, an organization dedicated to the needs of LGBTQ+ students of color, was the first organization to have a meeting Zoom-bombed, on Sept. 24. In the following weeks, organizations ASIA and Frames per Second also had meetings invaded.

The legislation calls for administrators to allow the Social Justice Center to create a mandatory annual cultural tolerance assessment for all community members. If someone fails the assessment, they would receive “feedback and support” from the college to ensure they pass on a second attempt.

The act also calls on Emerson to acknowledge “micro and macroaggressions”, provide more transparency in its investigation of racist acts on campus, and give clearer definitions of hate speech and hate crimes.

Executive President Lindsay Debrosse said she hopes the legislation passed Tuesday will spur the college to respond to inappropriate incidents with more urgency.

The college did not immediately respond to the first Zoom-bombing. Only after the second incident occurred did Vice President and Dean for Campus Life Jim Hoppe send an email to students on Oct. 9 denouncing the attacks.

“The concern for me and others was that something was said after the second time,” Debrosse said. “The first time was one too many, and a response should’ve happened right after that, and then ASIA happened and then Frames per Second happened. I want to know why it’s happening, how they’re doing it, and [use] that information to build effective legislation. Hopefully, we can prevent it from happening. But if it does happen again, the school will know better.”

The organization passed two resolutions during the spring semester. The first was a statement in solidarity with the full-time faculty union’s decision to boycott directed study courses. The second, authored by former Executive Treasurer Abigail Semple, initially sought to provide financial compensation for students whose courses couldn’t proceed normally after shifting online, but was amended to open a dialogue with administrators.

When the resolution supporting the faculty union passed, it showed that students both inside and outside SGA stood with the union’s decision, former Executive President Will Palauskas said in an interview in February.

“Now it’s not just going to be coming from the full-time faculty union. It’s not just going to be coming from one student. It’s going to be a resolution that was authored by one student and then sponsored by maybe 20 others,” he said. “And those 20 students represent a good portion of the 3,800 undergraduates here at Emerson. It’s like saying the vast majority of undergraduates at the college believe that what’s happening is not okay, and it’s important that we start to create some really big change.”

Despite the show of solidarity from SGA, full-time faculty members still do not receive compensation for directed study courses.

There does not appear to be any difference between resolutions and legislation.

Ayesha-Wirasto, who is also a member of the activist organization Protesting Oppression with Education Reform, said administrators have been more receptive to policy proposals coming from SGA than from POWER.

“SGA—like it or not—we have a platform that the college, as an institution, legitimizes,” she said. “They would much prefer to hear from SGA than POWER, even if we are saying the exact same things, just because that is the nature of our platform. And I think taking a stance is important, but it is so easy to do. I think it’s important to vocalize our support for something, but what are we doing beyond that?”

Debrosse said SGA could use legislation to hold administration accountable if policies that potentially harm students are implemented in the future.

“It is our job, essentially, to make sure that they know we don’t like [a policy] and to make sure that we create legislation that speaks for all students where everyone is represented and to make sure our stance is clear,” she said. “Emerson acts like they can do whatever they want just because these kids are shelling out money they don’t really have. But that’s unacceptable. We, as students, are the very reason this school is running, [and] if they present something that doesn’t align with what we want, it is our job to make sure that our concerns are understood.”

Debrosse said it was important for her to fill open positions across SGA before passing legislation so the organization could incorporate a variety of perspectives in policy-making efforts.

“It wouldn’t make a whole lot of sense if our point is to advocate for students but we don’t have the people to represent those students,” she said in a phone interview from Florida. “It’d be much better to have someone to speak for international students, intercultural students, VMA students, to make sure that everyone’s voices come to the table. If we started doing legislation even a month ago, we wouldn’t have most of the people we have now.”

Johnson said the intent in shifting to a legislative model was to give students more of a voice in affairs at the college.

“As much as I think SGA has been doing great work… we just wanted to formalize it more, make it more accessible and [make] people take us more seriously,” he said.

Ayesha-Wirasto said it’s been difficult for SGA to determine how the legislative model can best function.

“Specifically about legislation, it’s been hard because we’ve never done it before,” she said. “It’s really just, how can we settle into a routine or figure out a timeline of things? Drafting [legislation] and [then] reviewing [it] and then getting it approved by the rest of SGA, and then how are we going to publish it or communicate it with the people we’re trying to send the legislation to?”

The new constitution does not represent a dramatic shift in the way SGA functions at the college, Palauskas said.

“I feel like there’s a playbook in a way,” he said. “It’s not radically different. It’s different, but it’s not like we totally deconstructed the idea of what student government means. I think we just kind of codified it in a new way.”