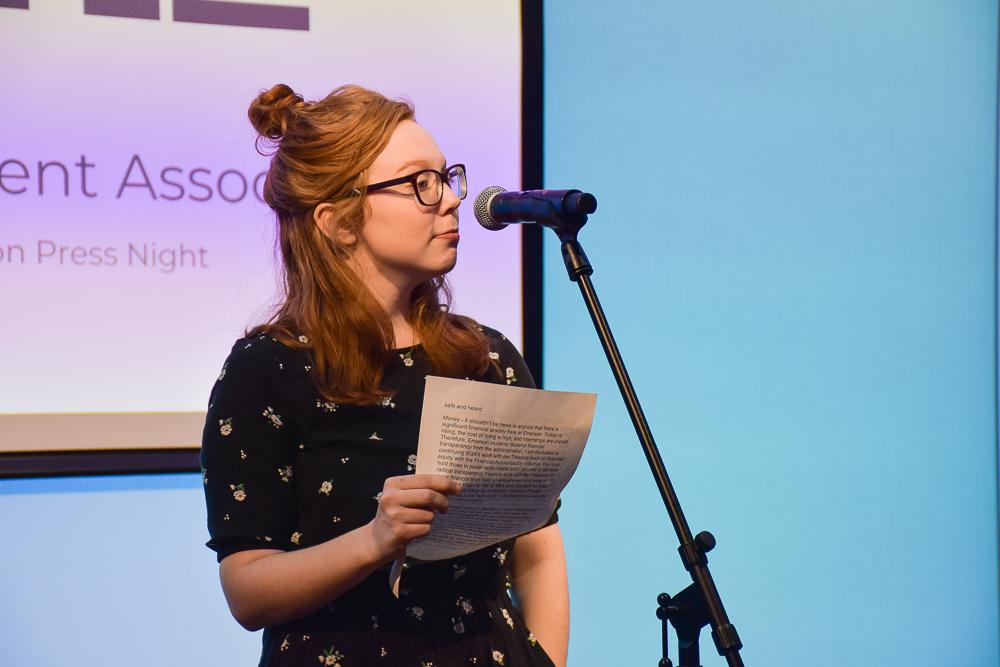 Four Student Government Association senatorial and executive board races are contested while 12 remain without balloted candidates as candidates spoke at SGA’s semesterly Press Night on March 26.

Two candidates seek to secure the Visual and Media Arts senatorial position—sophomore Somari Davis and freshman Mallory Shofi. Both candidates hope to increase communication between their department and students.

Shofi spoke at press night about primarily serving as a liaison between the department’s faculty and students. As the incumbent, Davis mentioned her prior experience in SGA as VMA senator and how she believed another term in office would benefit the entire department. Davis also emphasized her commitment to diversifying the VMA department.

“What I would like in my role is to emphasize the ‘V’ in VMA,” Davis said in a written statement because she could not be present at the event. “I have to make the students visible and the work the department is doing for students transparent.”

Sophomores Arasha Lalani and Brandon Smith campaigned for Class of 2021 president. Only Lalani’s name will appear on the ballot as Smith initially decided to run for 2021 treasurer and must now run a write-in campaign for the presidency instead.

As the incumbent, Lalani emphasized her successes in the position including her campaign to bring menstrual products to on-campus bathrooms free of charge. She also mentioned her hope to increase communication between the college and students on issues such as construction and called for increased transparency about the college’s purchases and building renovations.

Executive Presidential candidate Raz Moayed prepared a video statement because she could not attend press night. Moayed emphasized her three years in SGA and her hope to continue her work there.

“I’ve committed a lot of time to SGA and in the past three years I’ve found Emerson to be my home,” Moayed said in her statement. “So if you vote for me as President, know I’ll always be in your corner.”

Executive Vice Presidential candidate Annie Noel and Will Paulauskas both focused their speeches on streamlining internal communication from the college and its departments to students while highlighting their tenures as SGA Communications Studies and Marketing senators respectively.

Executive Treasurer candidates Joseph Davidi, Abigail Semple, and Brady Baca all made statements at the event as well.

Seven candidates run unopposed. Many of the departmental candidates hope to increase communication between their departments and the students.

The uncontested elections are:

Twelve positions remain without running candidates. These include: