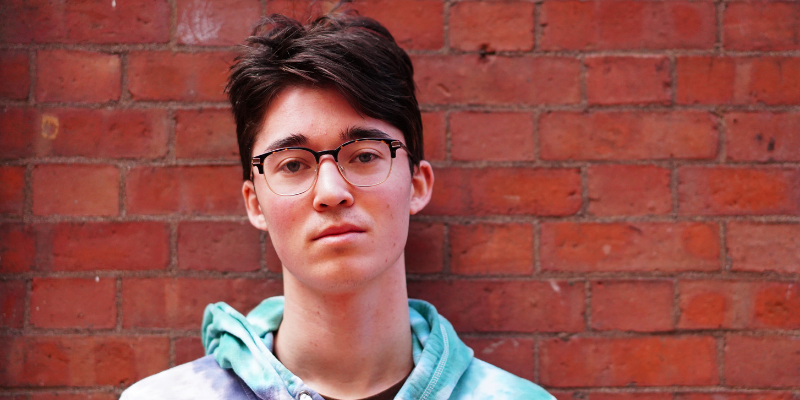 Freshman Brady Baca is running for Executive Treasurer of SGA despite not having served on the treasury team. Photo by Xinyi Tu

Sophomore Joseph Davidi dropped out of the spring 2019 Student Government Association executive treasurer race which leaves freshman challenger Brady Baca with a likely victory in April, as the only actively campaigning candidate.

The executive treasurer handles approximately $1 million in funding allocated to SGA-funded student organizations and possesses the most authority over the day-to-day experience of student organizations’ members, current Executive Treasurer and senior Ian Mandt said in an interview.

Mandt, in his second year as executive treasurer, said the position focuses primarily on student organizations and the paperwork regarding annual budget requests, appeals, and reimbursements. He said it took him two years to learn how to effectively manage the position’s responsibilities.

“I would like to see candidates focus on their qualifications on that front, first and foremost,” he said. “If [Baca] does have a full understanding of the position, I don’t know that I would say he has the skill level to execute the position.”

Mandt said his opinion of the candidates does not reflect his views on the individuals running the campaigns. Instead, he wants students to have an executive treasurer who serves their needs. Mandt said he worries about the ability of any candidate to learn the responsibilities of the position within a month before they fill the role.

Once an executive treasurer is elected, they spend the month of April learning the responsibilities and day-to-day tasks from the sitting treasurer.

Current treasury team member Davidi said he decided to drop out of the race on March 20 after considering his career and academic plans for the next six to seven months. While Davidi said he does not plan to actively campaign, his name will remain on the ballot due to SGA election technicalities.

“If [students] want to vote for me because they feel uncomfortable voting for someone else, or they just don’t know that I’m not running anymore, then that’s fine,” he said. “If for whatever reason I was picked, I’ll reassess.”

Mandt said one weakness he noticed in his time as treasurer was prioritizing the position above personal, academic, and professional goals.

“While it is disappointing to see the position no longer be contested … I fully support [Davidi] in making the decision that he did,” he said.

Current Class of 2022 Senator Baca entered the treasurer’s race with the slogan “$70k a year and this is what we get?” He has yet to serve on the treasury team.

Baca said he decided to run for executive treasurer to have an increased voice in SGA meetings and face-to-face time with administrators. Baca made his decision to run after he learned Vice Treasurer Rachel Levin would not pursue an executive treasurer campaign as she plans to study abroad next year and graduate in spring 2020.

“I can seriously shift the conversation around student finances as well as the financial affordability and transparency of the institution itself,” Baca said.

Tuition and room and board total approximately $64,000 for two semesters in a single dorm room at the Boston campus. Baca said in a phone interview that he hyperinflated the $70,000 figure by $6,000 to include the cost of day-to-day living in Boston.

Baca said his campaign focuses on addressing issues such as student food insecurity, financial transparency from the college and SGA, expanding on-campus services for off-campus students, and working closely with both staff and faculty unions.

Baca released a video on Facebook alleging that even with the high cost of tuition, students resort to rationing meal swipes at the Dining Center. The approximately minute-long clip also addresses the college’s real estate acquisitions. Baca did not discuss the financial management of student organizations in the video.

“I mean what the f— Emerson,” he said to the tune of “Barracuda” by the late 1970s rock band Heart. “If this administration thinks that it can continue to raise our tuition to prioritize real estate acquisition over our own academic success—while we continue to live in one of the most expensive cities to live in the country—well then they need a strong reminder of about who the hell they’re working for.”

A USA Today article published in 2018 placed Boston 16 out of 25 for most expensive cost of living in the U.S. Baca also said the college raised tuition to prioritize real estate acquisition. According to previous Beacon reporting, the college did not use tuition money to purchase 172 Tremont or 134-136 Boylston St.

Vice President and Dean for Campus Life Jim Hoppe said in a January 2018 email to the Emerson community that the college uses money gained from tuition increases to pay new professors and increase financial aid.

Davidi said he believes Baca’s heart is in the right place in regards to policy positions, but that Baca may not completely understand the role of the executive treasurer position.

“The video this morning—it was a lot,” Davidi said. “I feel like stoking fear is easy, and there are better [campaigning] tactics.”

Baca said in an interview after the video was published that he wants to be someone students can approach with financial concerns.

“The only people that I want to make fearful are folks in the administration,” he said. “I sincerely apologize if I concerned any member of the student body because I don’t want to be someone that students feel like they can’t trust.”

“If you are in this campaign to affect change for real, you need to know how to work with the people you’re working with,” Mandt said. “You need to at least give them goodwill at first. If they don’t work with you effectively, if they don’t take you seriously, then you can be a little bit more aggressive.”

In regards to policy goals, Baca said he plans to create a formal relationship between SGA and the staff and faculty unions. The coalition, as he calls it, does not currently exist and he hopes SGA will draft a resolution defining the terms of the relationship.

“Does that mean we are attending every meeting, are we showing our support for contract negotiations and any other concerns that they may have, or is it just a formality?” he said. “Well, it’s not going to be [a formality] if I have anything to do with it.”

Baca said the college should make financial documentation publicly available since students pay tuition, room and board, and fees. He said SGA’s lack of access to such documentation and lack of knowledge about where students’ money flows does not make sense.

Stephanie Purifoy and Anissa Gardizy contributed reporting and research to this article.

Assistant Enterprise Editor Belen Dumont did not edit this article due to a conflict of interest.