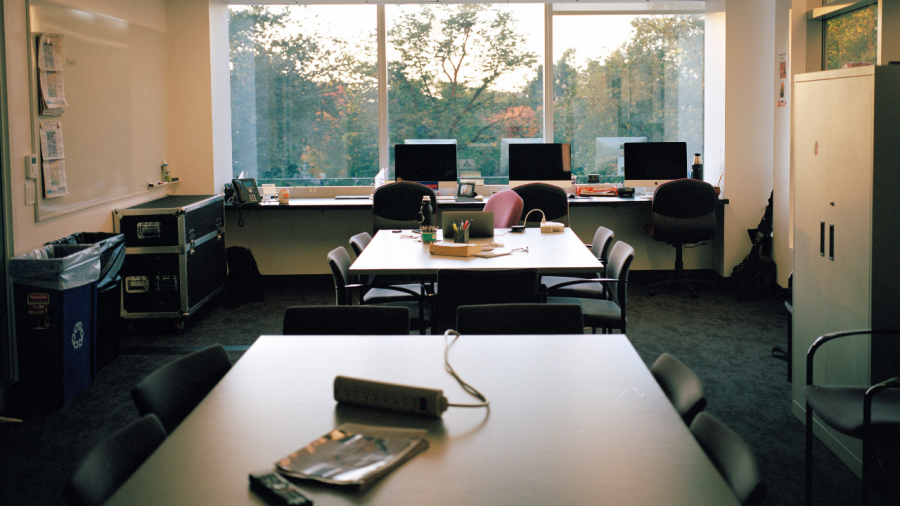 By Andrew Brinker and Frankie Rowley

“An Act of Acknowledgement for The Berkeley Beacon,” calls for the paper to issue a public apology to “every marginalized reporter who The Beacon has hurt,” including current and former staff members. It also asks the paper to educate prospective students about its “racist and ableist past.” SGA does not have the power to directly enforce the legislation. Only college officials can enforce such a mandate to the paper.

The new legislation follows a semester of public upheaval at The Beacon, that saw more than 15 staff members resign over an article they said uplifted a white student’s experience with Black Lives Matter protests while neglecting to include a perspective from Black students or any students of color. They also aired grievances over the paper’s power structure, past articles that were found to include racist or ableist sentiments, and instances of discrimination involving current and past editors.

“The Beacon upholds this toxic news boys club environment, and if you aren’t one of the boys, you aren’t anyone to care about,” one former Beacon staffer said in a testimonial. “They don’t care about amplifying marginalized voices or creating an inclusive and safe environment.”

The legislation modified a proposal submitted by several former Beacon staffers to SGA on Dec. 1 that sought to temporarily dissolve the paper.

Introduced by various student activists including several former Beacon staffers of color, the original proposal suggested SGA reallocate The Beacon’s nearly $40,000 in yearly funding to other student publications on campus. It also called for a series of corrective measures, including creating a “working group” of students from campus advocacy groups that would wield power over the paper’s policies and hiring processes.

Much of the proposal fell outside of SGA’s jurisdiction and may have been unenforceable under SGA treasury policy. The Beacon, along with other SGA-affiliated student organizations, must get SGA approval for funding, which comes from student fees paid to Emerson. SGA administers how those fees are allocated.

Those who submitted the proposal attached a petition with more than 300 signatures to “hold The Beacon accountable.” Also attached were 22 student testimonies, some of which detail personal internal experiences with the paper’s management that organizers say are indicative of a toxic power structure. Others note qualms with the paper’s coverage in recent years, saying they were personally harmed by The Beacon’s editorial decisions.

Debate broke out about the petition and proposed legislation in SGA’s Dec. 8 Student Assembly meeting, after Beacon incoming Editor-in-Chief Katie Redefer said the publication is committed to changing the paper.

“It is not our intention to undermine the criticism reflected in the petition, those who use their voices with the hope of holding The Beacon accountable,” Redefer said. “It’s essential that we listen to these voices if we’re ever going to run a more equitable newsroom, and we agree that The Beacon has made many regrettable decisions in the past, especially decisions that harm BIPOC students, students with disabilities, and other marginalized communities. This is unacceptable, point blank period, unacceptable. We extend our apology to those who have been harmed and we want to express our intention to prevent this from happening in the future.”

The petition was submitted to SGA’s Legislative Review Board, chaired by Executive Vice President Jehan Ayesha-Wirasto, a second-year journalism major. The board seeks to “assist those who wish to present legislation” to SGA, by making sure proposals are in accordance with SGA’s constitution.

While the initial petition called for defunding The Beacon, the new legislation doesn’t include that directive.

“[The legislation] is not saying that we, SGA, are taking away The Beacon’s funding,” Ayesha-Wirasto said. “We are simply trying to raise the standards with which we are holding all student organizations, including ourselves, when it comes to racism, ableism, sexism and other forms of oppression. And we’re trying to do so in a more tangible manner across the board.”

Legislation is intended to be a call to action for administrators, as SGA does not have the power to directly influence or change college policy. The petition has been submitted to Emerson’s Office of Community Standards which will review the issue.

The Beacon’s upper management publicly committed to a number of changes to existing policy in September, including implementation of mandatory bias training for staff members and correspondents, a more democratic editor-in-chief and managing editor selection process, and an audit of the paper’s recent coverage.

The Beacon has since implemented a number of those changes, according to a letter published in the paper from current Editor-in-Chief Diti Kohli. They include bias training (three workshops took place in the fall semester), and an overhauled constitution that will create a professional advisory board to consult on stories related to issues affecting marginalized communities before publication. The audit the paper committed to in September, which aims to evaluate past articles for instances of bias or discrimination, is not yet complete, she wrote. She said The Beacon aims to conclude the audit by the end of the calendar year.

“There’s still so much institutional and personal work to be done,” Kohli’s letter reads. “We cannot magically fix ourselves—or the systemic problems in journalism—in 12 weeks. That said, our editorial staff is making a deliberate effort to scrutinize what we publish and how.”

Student organizers said in their original proposal that “The Beacon has not made any structural changes as reflected in the letter, memo, and students of color’s personal narratives.” Some of the deadlines and goals the paper committed to in a Sept. 10 letter, like publicizing new constitutional amendments, have fallen to the wayside, they said. They also alleged that some articles on issues relating to marginalized communities published in the fall semester were not run through professional journalists of color, as the letter stated they would be.

“You guys are saying ‘We’re trying,’ [and] the fact that you even wrote out a list defending yourselves and then you have the nerve to say ‘We’re doing the best we can,’… it’s ridiculous,” one organizer and former Beacon staffer said in the meeting. “It’s so sad that so many of you guys are going to go to bat for a racist publication.”

SGA also amended a broader piece of previously passed legislation Dec. 8. It called for a series of actions against student organizations found to have harmed students from marginalized communities. Under the amendment, student organizations could be placed on probation by the Office of Community Standards or have their ability to offer a non-tuition credit revoked if they violated the policy.

That legislation, entitled an “Act to Advocate for Marginalized Students,” was originally passed on Oct. 20. It followed series of “Zoom-bombings,” where unknown individuals joined cultural student organization meetings to levy racist, sexist and homophobic attacks against members.

The amendments, if mandated by the college, would create a new enforcement educational program for student organizations. That program would require student organization members to attend a mandatory bias training workshop upon joining and write a reflection on an assigned anti-racist, anti-abelist, or anti-oppressive resource. It would also create a new position at the college for a professional bias trainer.

College officials have not publicly commented on the legislation, proposal, or any allegations made against The Beacon.

This story was only edited by The Beacon’s news team, incoming leadership, and several of the paper’s professional advisors.