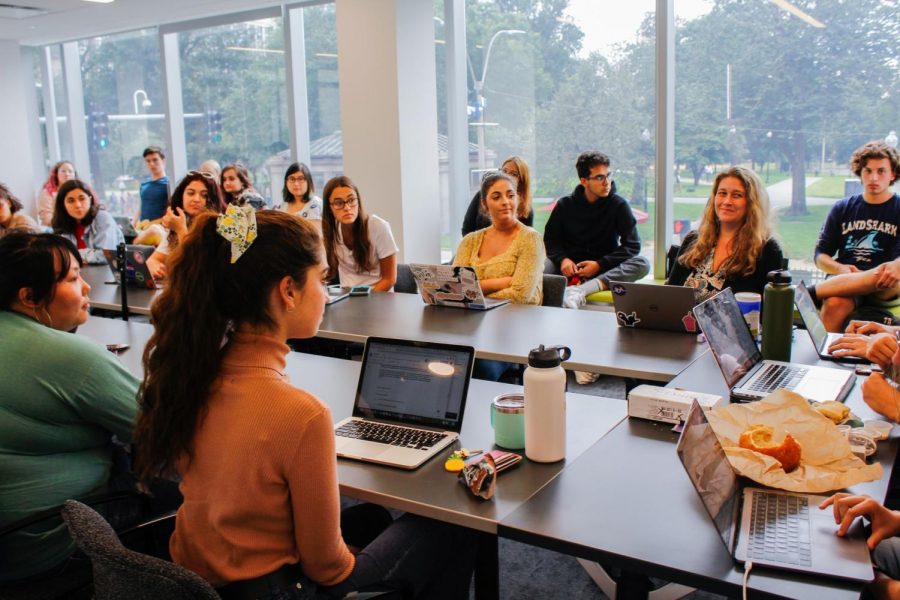 Students are championing the Student Government Association’s “Week of Rest” initiative, which calls for an alternative spring break in response to student complaints of burnout after seven straight weeks of hybrid learning.

The decision to cancel spring break was finalized after a faculty union vote during a Faculty Assembly meeting in October. The cancellation—which a myriad of other schools in the Boston area have also done—was due to concerns about spring break travel increasing COVID-19 positives at Emerson, college officials said. The “Week of Rest” initiative—proposed by SGA in late February—asks the college to give students and faculty an alternative break after some reported fears of worsening mental health.

Executive Vice President jehan ayesha-wirasto introduced the proposal during a Student Assembly meeting on Feb. 26. In the meeting, ayesha-wirasto said “[we] want to write a resolution about asking for a week of rest and replacement of spring break because we’re burning the hell out.”

Since the Feb. 26 meeting, ayesha-wirasto, along with other members of SGA’s legislative review board, other organizations such as Protesting Oppression with Education Reform (POWER), and other Emerson students have begun circulating a Google Form to gauge community members’ mental state and to garner support for an alternative spring break. The form asks respondents to choose from several proposed replacements, including a period of no assignments, the reintroduction of a pass/fail grade option, more asynchronous classes, an extended Friday-Tuesday weekend, or a Monday-to-Friday break that excludes travel.

The petition, which has been shared on social media and sent directly to some students’ emails, calls on the college to create “an extended weekend beyond 3 days in lieu of a spring break” as well as providing additional options as alternatives to the three-day break.

Despite students’ expressed concerns, college officials have stated that the college cannot make changes to the academic calendar once it has been finalized.

“The length of term, time in class, and days in a semester are compliance points that need to be met in order to maintain regional accreditation and federal financial aid regulations,” Michaele Whelan, provost and vice president of academic affairs, wrote in an email to The Beacon. “While we would have preferred to provide a spring break to the community, there was no way to do so. Therefore, the attempt was to create alternative breaks, which could not be as long.”

Some of the questions on the form ask whether respondents are experiencing burnout, as well as whether they feel the extended weekends provided by the college are sufficient to allow for “enough rest and rejuvenation.”

ayesha-wirasto declined a request for an interview, but wrote in an emailed statement to The Beacon that with a would-be spring break underway, the push for an alternative is imperative.

“My main concern right now is making sure we are taking as many factors into account as possible, because we are on a time crunch,” ayesha-wirasto said in the email. “Some of us, as students, are also having midterms (or equivalent). We are also trying to keep our options open so we can be flexible.”

Despite the college touting its purported additional day off each month, there is only one non-holiday extension reflected on the academic calendar as a “free day off” on March 12, which falls on a Friday—a day many students already do not have class. Other allotted days off, such as President’s Day and Patriot’s Day, are all federal holidays previously observed by the college.

The spring semester also began a week later than normal due in order to accommodate the lack of spring break.

“While not a substitute for spring break, each month has an extended weekend for some respite,” Whelan said. “There are many considerations to keep in mind when developing an academic calendar—along with its start and end dates. The health and safety of our community was, and remains the priority.”

Nearly 70 percent of students who have visited Emerson’s Counseling and Psychological Services this semester have reported that their mental health has been negatively impacted by COVID-19, according to data provided by Associate Director of Counseling Services Kyle Rundles.

Executive President Lindsay Debrosse spoke highly of the initiative, adding it would be detrimental if students don’t get a break soon.

“Students are not really having a great time,” she said in an interview with The Beacon. “Lots of students are stressed and burnt out.”

Debrosse also highlighted the importance of including faculty in the initiative, saying that she has seen that her professors are tired as well.

“I want us to in thinking about a week of rest [to be] incorporating faculty because I do see that my teachers are tired [and] they also have a lot of stuff going on,” Debrosse said. “I don’t have to read 28 papers. I have to write one paper. Yeah, just one. I just think it’s important to, at least for this, to not make it student-centered [and] to also include faculty because legally they have different issues than we do.”

Update: This article has been updated after the incorrect spelling of jehan ayesha-wirasto’s last name and to reflect how ayesha-wirasto wishes to be identified.