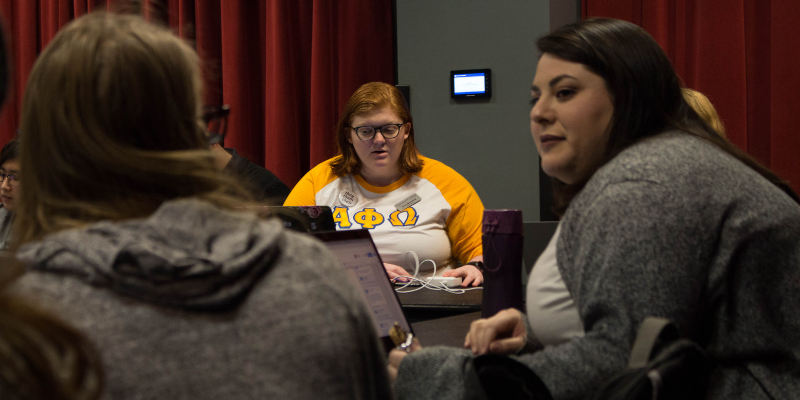 Class of 2019 President Ally MacLean (center) was the only dissenting vote on a proposal to change the student organization recognition process. Maia Sperber / Beacon Staff

The proposal passed with ten “yes” votes, two abstentions, and one dissenter—Ally MacLean, class of 2019 president.

“I’ve been working together with the executive board of SGA for the last eight months [to talk about] how [we can] streamline this process and make it more consistent every single semester,” Meier said.

Last semester, in response to the dissolution of the ORRB, SGA voted to approve the outline of a new process to recognize student organizations in collaboration with SEAL.

To become an affiliated organization, an independent organization must attend an information session hosted by SEAL, fill out an EmConnect form, and—if they achieve affiliated status—attend a three-week training with SEAL focused primarily on organization risk reduction and financial policies.

The Jan. 22 SGA meeting with Meier focused on questions asked in the EmConnect affiliation application form.

Multiple topics sparked debate, such as including a question in the EmConnect application that asks whether or not an organization creates a positive impact on the college community. After a lengthy debate about whether or not SGA could quantify positivity, the governmental body came to the conclusion to simply ask for the impact of the group on campus.

Executive Treasurer Ian Mandt reminded members at the meeting that, if certain organizations promote ideas SGA does not wish to endorse—such as alt-right groups—funding is now separate from affiliation.

“We are intentionally making funding entirely separate from [the affiliation] process,” Mandt said. “An organization could receive affiliation through this objective process, but we have more direct control over funding and have the authority to say, ‘This is an organization that we do not believe should be financially supported.’”