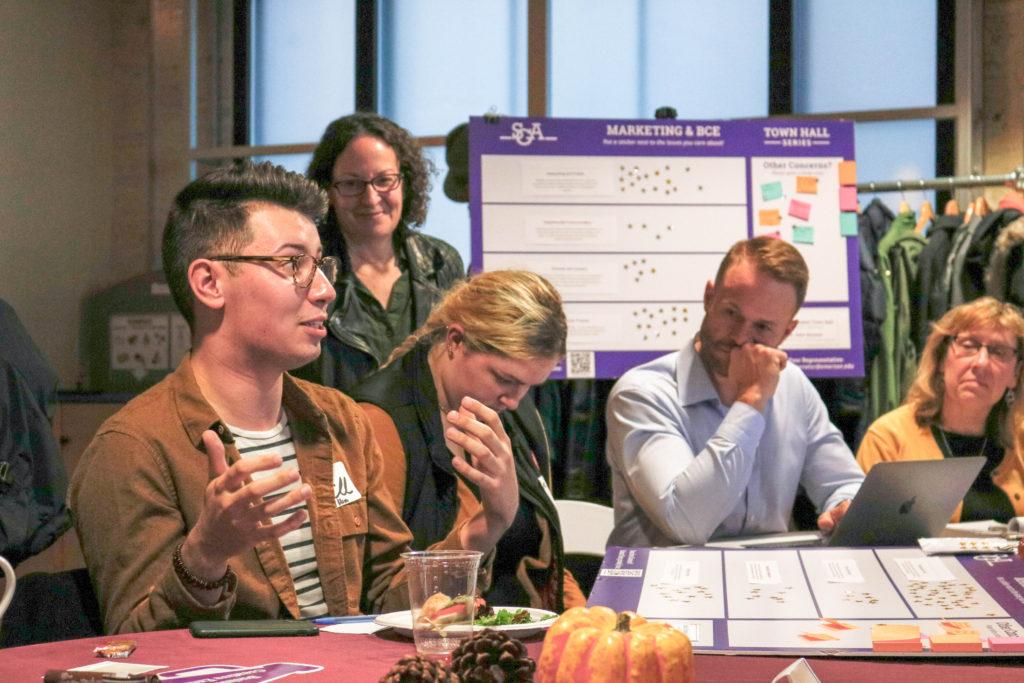 SGA Executive President Will Palauskas introduced sweeping changes to the structure of SGA at the first joint session of the semester. Beacon Archives

Faculty and students gathered to discuss their academic experiences and help the Student Government Association collect information on potential changes at the SGA Academic Town Hall on Tuesday.

“This is sort of our place to come together and talk about all these things that hopefully will make Emerson better,” co-host and Executive Vice President Raz Moayed said.

Each department within the college set up their own table near concern posters designed by Marketing Communications Senator William Palauskas. They divided each poster into three sections detailing problems put forth by SGA where students could place stickers to show their agreement. A fourth section allowed students to place concerns that SGA did not already include on the posters with post-it notes.

The posters stood in popular spots around campus, such as the library and the dining hall, for about a month before the town hall.

Moderators from the Office of Campus Life took notes to compile the discussions into a document that SGA will post on Facebook. SGA members mostly directed the departmental conversations at the roundtables.

“This is not the end of the conversation—this will never be the end,” Moayed said. “This is just the very beginning honestly, and hopefully this dialogue won’t end.”

The discussion topics came from the attendees’ personal experiences and the posters by the tables. A pile of index cards sat at the center of each table for attendees to write down concerns they felt uncomfortable sharing out loud.

Moayed said she felt the Town Hall went well. She plans to use the information the Campus Life moderators gathered to help inform the SGA Academic Initiative—where SGA states what academic changes they would like to see—towards the end of the year.

“I want this to be an avenue for students to take advantage of,” Moayed said.

Executive President Jessica Guida hopes to use the experience from this Town Hall to better any future Town Halls, including ensuring they can accommodate all attendees. The number of attendees prompted a section of the performing arts discussion to move to the mezzanine of the theater.

“I’m hoping that it strengthened a little bit of the relationship between students and faculty, and I’m hoping that will continue to grow,” Guida said.

“It makes me so encouraged because people care so much that there’s space to have an open and honest conversation and dialogue, and also that people are willing to do what needs to be done to improve the academic experience,” Duffy said. “That’s very unique to Emerson.”

Visual and media arts students Chappie Chaput and Will Nichols both said they felt faculty heard their feedback.

“It seemed like [VMA Chair Brooke Knight] wanted to know what we had to say because at first, we were just talking to each other [and] pointing at the board,” Chaput said.