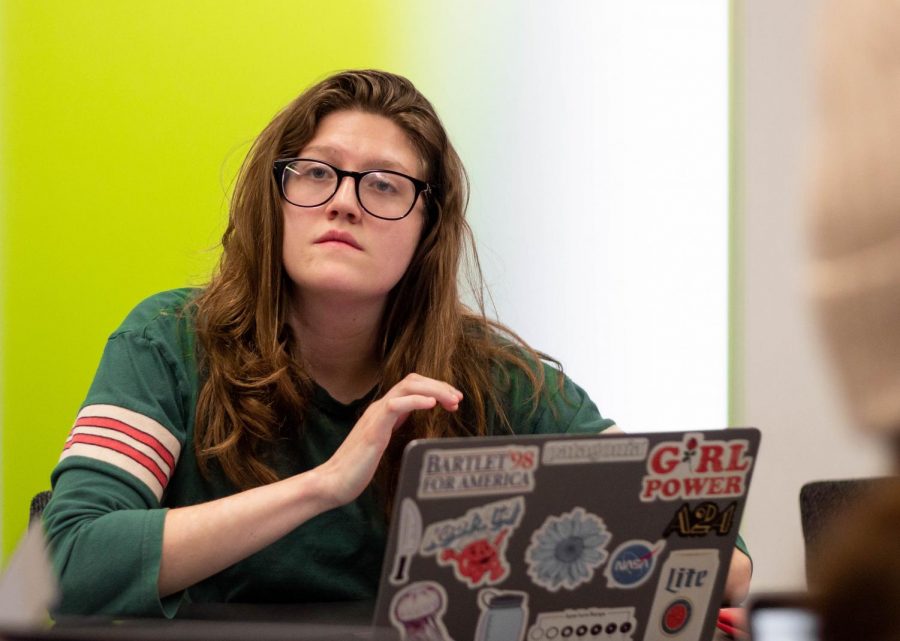 Student Government Association Executive Treasurer Abigail Semple faces questions about the legitimacy of her initial election to the organization and current eligibility bringing to light the possibility of impeachment.

The Beacon identified multiple potential oversights of Student Government Association constitutional policy that have the potential to warrant articles of impeachment against Semple and call into question the validity of her presence in SGA. Semple spent the first weeks of the semester attempting to push through a proposal to create a Financial Equity Board with little avail.

The two grounds include Semple’s failure to meet the appropriate qualifications to serve as the executive treasurer and botched SGA election practices that put into question the legitimacy of her spring 2019 election win.

Article VII, Section II of SGA’s constitution, titled “Qualifications,” dictates that in order for a student to assume the position of executive president, vice president, or treasurer, they are required to be enrolled in at least 12 academic credits at the college.

Semple is currently only enrolled in eight credits at the college, four short of the minimum requirement, making her ineligible for the executive treasurership, according to documentation obtained by The Beacon.

Semple, in an interview with The Beacon Wednesday night, argued that the minimum credit requirement doesn’t currently apply to her, as Article VII deals with election qualifications.

“Those are listed as qualifications to be elected and to be appointed,” she said. “I was elected during the spring semester of my junior year while I was a full-time student. If [the qualifications] were for me to serve as treasurer, they would fall under my duties and responsibilities, not qualifications.”

The highly contentious spring 2019 race for executive treasurer saw Semple win the position after the two top vote getters, Joseph Davidi and Brady Baca, declined the job. Semple managed to secure the position with a write-in campaign that garnered only 86 votes.

While Semple’s rise to the position at the time raised questions, it now appears that her election was illegitimate under SGA’s constitution. The organization’s constitution dictates that in order for a candidate to be elected, they must receive a simple majority of total votes cast in the election.

“To be elected, all candidates must receive a majority (>50%) of all votes cast in a general election of the entire Emerson College undergraduate population,” it reads.

Furthermore, the constitution states that if no candidate receives more than 50 percent of overall votes cast in the election, a secondary election must take place within five days of the initial election to determine a winner.

“In the case that there is no majority, another election must take place within five (5) school days between the two candidates receiving the highest number of votes in the first election,” it reads.

In the case of the Spring 2019 election, no secondary election was held—Semple simply assumed the position of executive treasurer.

Semple acknowledged that SGA failed to carry out the appropriate elections procedure last spring, but contended that such a misstep by the organization as a whole does not warrant her impeachment.

She also drew attention to the grounds for impeachment outlined in the SGA constitution, saying that her situation did not justify any action against her.

“Any officer of SGA who knowingly evades their duties as set down by this constitution, or commits any act that is determined to be detrimental to the welfare of the student body is subject to impeachment,” the constitution reads.

The crux of Semple’s argument is that she did not knowingly evade her constitutional duties.

“If [the constitution] said ‘evades their duties or does not meet the qualifications for their role,’ then I would say impeach me,” she said. “But that’s not what it says. So, I don’t want to resign.”

While Semple rejected the premises of the two grounds for impeachment, she argued more broadly that if her service in SGA does violate their constitution, full impeachment proceedings and removing her from office would be counterintuitive.

“I think that we ought to talk about what’s best for the student body,” she said. “Is it really worth it to go through a two-week impeachment process and then to train another treasurer who might not be elected to that position anyway? Especially when students rely on me to reimburse them for things?”

Correction 02/06/20: A previous version of this story stated Abigail Semple received 68 write-in votes during the spring 2019 election. This post has been updated to represent the correct total of 86 votes.