‘Shine Through’ campaign raises more than $50,000 for student financial aid 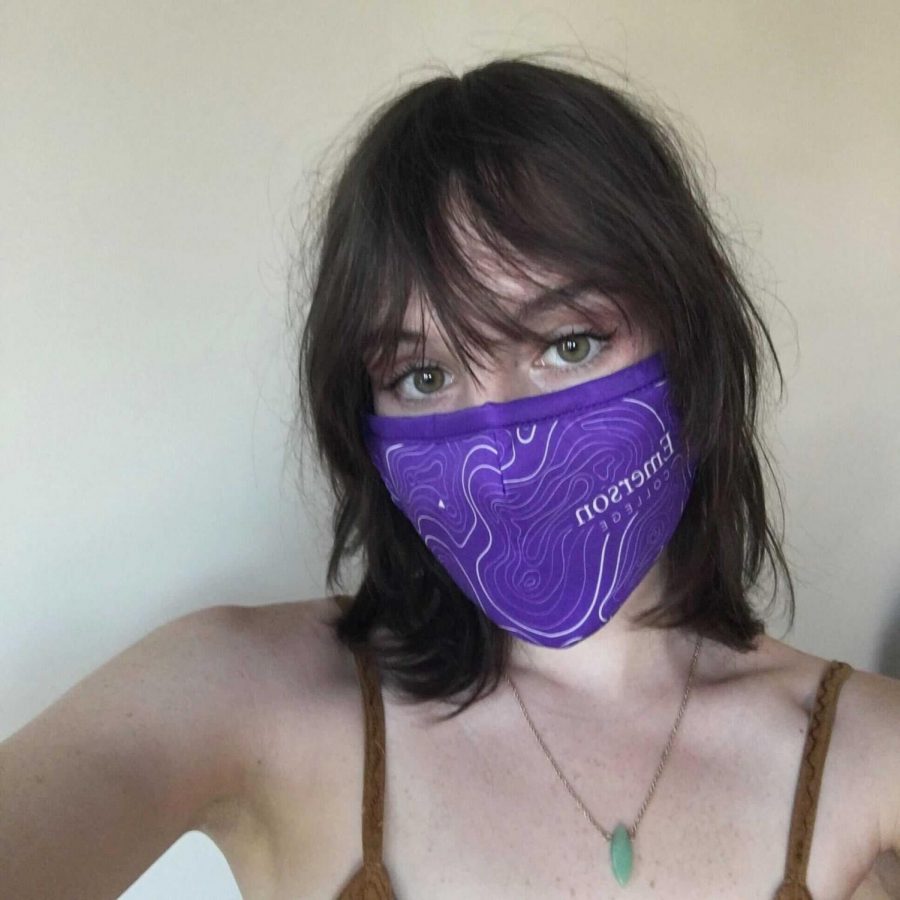 Jennifer Scully '21 wearing the custom mask created for the "Shine Through" fundraiser.

Emerson’s “Shine Through” fundraising campaign, which gifted custom Emerson-branded facemasks to donors, raised $53,111 in unrestricted financial aid for students over its five-day run.

Launched by the Office of Institutional Advancement, the fundraiser ran from Oct. 19 to Oct. 23 and was bolstered by a “Shine Through” social media campaign centered around a purple mask with the Emerson College logo.

Financial aid became the college’s top fundraising priority following the devastating economic effects of the coronavirus pandemic, Director of Annual Giving Anna Biller said. The money raised will be distributed to students who are eligible for need-based aid from the college.

“It’s cash coming in the door, so it’s not going into the endowment, it’s going directly into the students’ hands,” Biller said in an interview.

The thousands the campaign raked in will serve as unrestricted financial aid, meaning any student in need of financial assistance can receive funds. The funds will be distributed to students sometime in the current fiscal year.

“Financial aid comes into the year with a budget, and they do an amazing job of distributing those dollars as broadly as they can to enable students to choose to come and also to be able to stay,” Vice President of Institutional Advancement John Malcolm said. “But the dollars are insufficient for the task.”

The campaign concluded with 580 individual contributions—the majority from alumni, then parents, faculty and staff, and students.

The college created two face covering designs for donors to receive and posted them on social media for alumni and parents to vote on before the campaign launched. A direct mail vendor in Boston will send the masks to donors early next week, Biller said.

Remember—thanks to a few generous donors, your gift of $10 to the Shine Through campaign now becomes $20, $50 now becomes $100, until we hit $20k! Make your gift now to 💜💜double your impact💜💜 on student financial aid! #EmersonShinesThrough https://t.co/N1pIRlYRjX https://t.co/1b0ey5Z2AH

Students boosted the campaign efforts by doing social media takeovers while wearing the Emerson face coverings, as well as writing thank-you notes by hand to every donor.

Planning for the campaign began in June along with other fundraising ideas to help students with financial aid this year.

“We thought, ‘let’s continue to do that kind of campaign going forward,’” Malcolm, who oversaw marketing the campaign, said. “The team did a lot of thinking over the summer about what we might use as an incentive for giving or some kind of iconic item we could give people who had contributed that symbolizes giving in the COVID-19 environment. And it made a lot of sense for us to focus on face covers.”

While the campaign is over, Biller said she is still receiving emails from people who want to make donations.

“I just had somebody come through today—an alumni emailed our giving email address saying ‘I missed the campaign and really wanted to give, can I give today?’” Biller said. “So, of course, we’re saying yes to that; I don’t want to turn anybody away from being philanthropic to the college.”

Malcolm said that the college will update its giving pages to provide more information about financial aid fundraising. Future campaigns, like the college’s annual parents fundraiser and another to help support the college’s response to COVID-19, are also in the works, he said.

“I hear firsthand a lot of times from students and from team members on the annual fund team just how important the scholarships and financial aid really are in keeping somebody coming to school when they otherwise might not be able to,” Biller said. “So there’s a real clarity around it; it has been really amazing to see the school coming together and say ‘this is our number-one priority right now for our students.’”