Sidewalk expansion project to finish on schedule despite delays 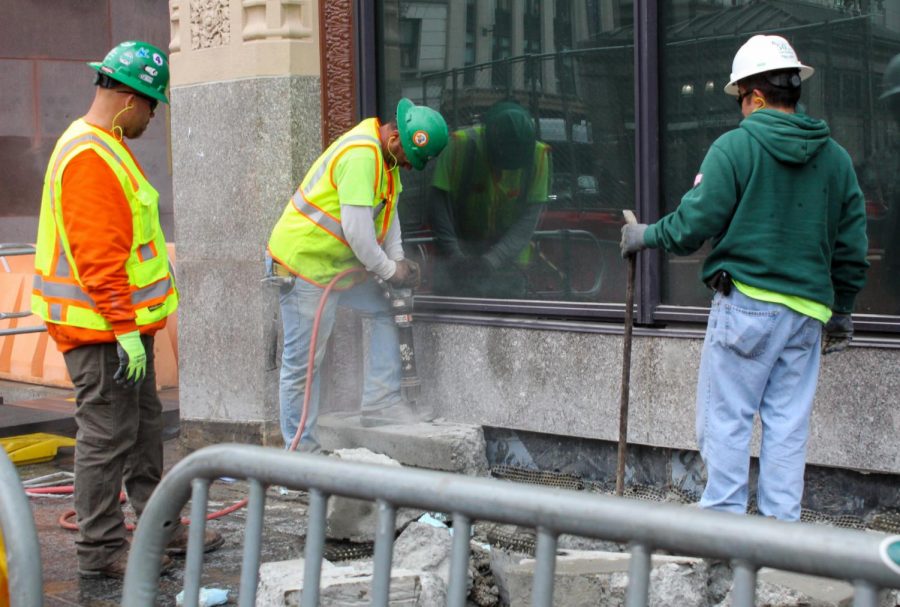 The college’s sidewalk expansion project experienced unanticipated delays in December but is still projected to finish on schedule in mid-September, according to a college official.

The delays resulted from what Assistant Vice President of Facilities and Campus Services Duncan Pollock labeled as “emergency repairs” that construction workers needed to address before they could progress. Pollock said construction of the sidewalk itself will finish by the time students return from summer break in August.

“Underneath the sidewalk are these chambers where the transformer bulbs are… for electricity,” Pollock said in a phone interview with The Beacon. “When they were digging up the cement they found that there was steel supporting the cement that needed to be replaced so they’re taking care of that now.”

The space between Little Building and Colonial Building also required a repair—crews had to lift the lid off of the transformer bulb, which converts the high voltage energy from power lines to lower voltages or vice versa, Pollock said.

The project, which initially began construction in September 2019, will bring greenery and benches to Boylston Street and a wider sidewalk that extends into the parking lane between Little Building and Boylston Place.

“I think the results will surprise a lot of people,” Vice President for Government and Community Relations Peggy Ings said. “Not only is it just a new sidewalk… we are also improving the [Boylston and Tremont] intersection and building a mid-block raised crossing.”

The raised crossing would provide safe passage for pedestrians who wish to cross Boylston Street outside of the established crosswalk. The new crossing will begin at Boylston Place and stretch over to Boston Common.

Crews are continuing to pour cement over sections of the sidewalk they demolished months earlier. Pollock said crews first need to repair the existing sections of the Boylston Street sidewalk before expansion can begin.

As a result of the expansion project, the college intends to increase pedestrian flow across campus and make the area more appealing to residents of the city, Ings said.

“One [goal] is to make this area a destination point for folks in the city to come down here to partake in … [including] appealing restaurants and an environment which will match that,” Ings said.

Other features of the construction, including the mid-block raised crossing and the re-painted Boylston and Tremont intersection will remain unfinished as they are “city dependent,” according to Pollock. He anticipates that these features will be complete around mid-September.