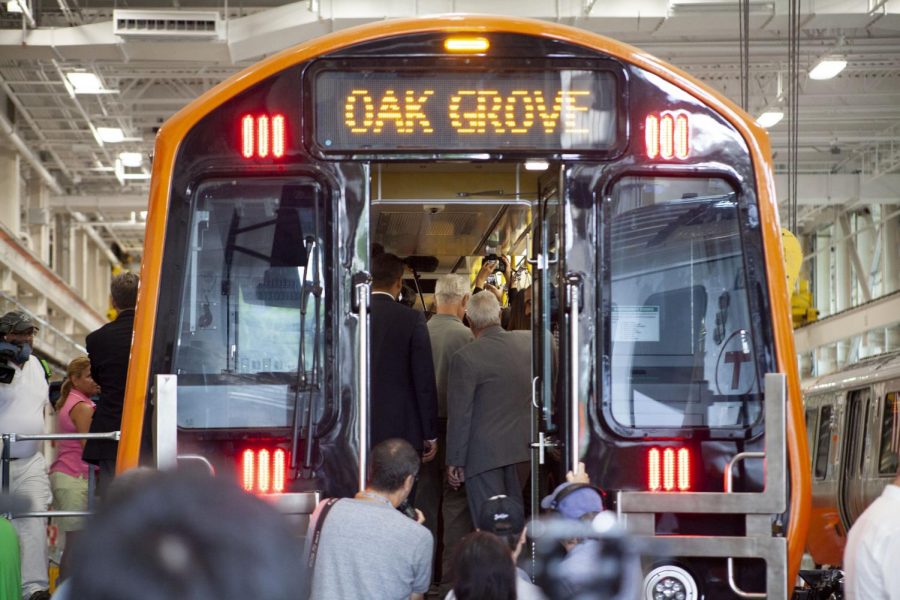 The Orange Line will be closed until Sept. 18 for safety repairs.

The long-awaited transformation of commuting on the Red Line or the Orange Line will require an even longer wait.

MBTA officials announced Monday that the all-new full fleets set to replace decades-old trains on both lines will arrive at least a year behind schedule, pushing back major improvements to the system’s capacity and the frequency of service.

Under its contract with Chinese manufacturer CRRC, the MBTA expected to have a complete fleet of new Orange Line cars delivered on a rolling basis by January 2022 and a fleet of new Red Line cars by September 2023. The Orange Line delivery is now projected to wrap up 15 months late and arrive in April 2023, while the Red Line set is running a year late and is expected to be done in September 2024.

“From the MBTA standpoint, we are obviously not happy about the schedule,” said MBTA Deputy General Manager Jeff Gonneville. “We are not happy about the delays and the impact it has to our customers, but also the impact it has to our employees. We will have to maintain our fleet for longer than we were anticipating having to do as a result of this.”

The projects, which together cost almost $2 billion, aim to replace the aging Orange and Red Line fleets with bigger groups of brand-new vehicles.

CRRC starts production in China and ships components to Massachusetts for final assembly, but the company experienced issues at its facility in Springfield ranging from material availability to staffing and training, Gonneville told the Fiscal and Management Control Board.

The COVID-19 pandemic exacerbated those issues, Gonneville said, prompting CRRC to shut down the Springfield facility in March and reduce capacity when it reopened in late May.

“At the heart of the issue has been production output from CRRC Springfield facility,” Gonneville said. “The most recent delays from the pandemic have only compounded some earlier issues CRRC was experiencing in pre-pandemic times.”

CRRC delivers the new vehicles in batches, and the MBTA has so far received 24 Orange Line cars with two additional pairs set to arrive this month. Three trains featuring all-new cars are in passenger service after the first one launched in August 2019.

On the Red Line, six pilot cars have arrived and are being tested, but that process was also delayed due to the pandemic, Gonneville said. The first new Red Line train set should start passenger service by the end of the year, he added.

The project has been an often-touted accomplishment for the Baker administration. Once complete, the newer and larger trains should add about 85,000 seats to the T’s core subway system.

That goal is also pushed back as a result of the manufacturing delay. Gonneville said the T now expects to achieve the shorter headways by summer 2023 for the Orange Line and winter 2024 for the Red Line.

However, because of the rolling delivery schedule, enough trains should arrive to run existing levels of service with all-new fleets by spring 2022 on the Orange Line and winter 2023 on the Red Line, he said.

Most of the infrastructure work the T is conducting to prepare for the transformation, including signal upgrades and construction of testing facilities, remains on schedule, officials said Monday.

The MBTA may seek financial recourse to account for the delay. Its contract with CRRC includes language requiring the company to pay $500 per day for each car that is delivered late — potentially representing hundreds of thousands or millions of dollars.

Gonneville said officials “certainly do intend” to examine that option once the contract is complete.

Before the delay, the T found several problems with the new vehicles. In September 2019, a door leaf opened while a train was in motion, prompting the agency to take the trains offline for several days. The MBTA then pulled them from service in November 2019 due to a faulty pad interface and again in March after inspectors found a problem with the bolsters.