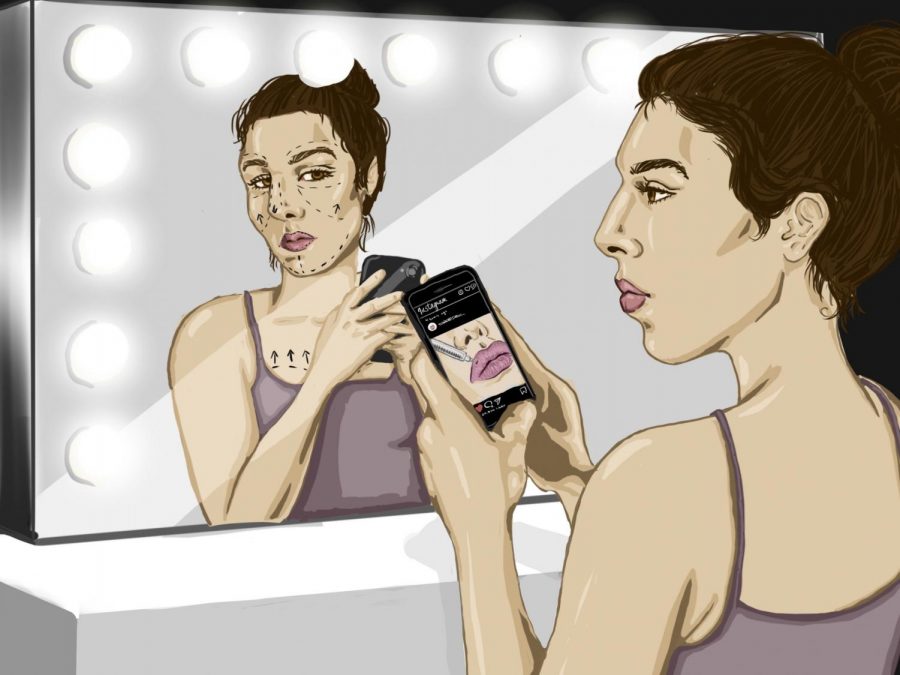 Instead of creating self-confidence by erasing long standing insecurities, these procedures sometimes transfer those insecurities onto other people.

When a friend in middle school told me she couldn’t wait to spend her Bat Mitzvah money on a nose job, I told her to “go for it.” I remember thinking that plastic surgery was a positive thing; that it helped people feel more confident about themselves.

As I got older, plastic surgery became more and more popular. Since 2000, the year I was born, plastic surgery procedures have risen by 115 percent, according to the American Society of Plastic Surgeons. But I began to notice that instead of creating self-confidence by erasing long standing insecurities, these procedures sometimes transfer those insecurities onto other people.

I understand someone wanting to change something they dislike about themselves. For so many people, especially women, cosmetic procedures can provide a newfound sense of empowerment. When I first heard the argument that plastic surgery could be a feminist decision from a friend, I agreed. It felt consistent with someone taking ownership over their body through female sexual liberation or deciding to get a breast reconstruction after a mastectomy. Still, I can’t ignore that a cancer patient making the choice to undergo life-saving surgery is not the same as someone deciding that their body just isn’t curvy enough.

The message behind the surgeries is ugly. I would never judge someone personally for going under the knife because it’s the plastic surgery epidemic as a whole that feels dangerous. It’s sad to me that people go to such lengths to erase a part of themselves in such an invasive and expensive way. It makes sense that so many young girls feel genuinely insecure when outside influences like Photoshop and social media constantly tell them they shouldn’t feel pretty just as they are. Surgeries like rhinoplasty to achieve a tiny nose and blepharoplasty (more commonly known as double eyelid surgery), among others, continue to promote eurocentric beauty standards as well.

Miami plastic surgeon Michael Salzhauer, known online as “Dr. Miami”, gained notoriety by sharing surgical videos on Snapchat in 2016. These videos have done wonders to boost his clientele. In a Forbes interview, Salzhauer said 60 percent of his customers hear about him directly from social media.

Back in 2008, Salzhauer even wrote and published a book intended for “children under the age of eight,” titled “My Beautiful Mommy.” The picture book is centered around a young child who understands and learns about their mother’s plastic surgery procedure. After the mother’s surgery at the end of the book, Salzhauer writes that the mother is now “the most beautiful butterfly in the whole world.” I can’t even put into words how sick it is to brainwash young children into thinking that their mother’s body needs to be fixed.

Following Salzhauer’s footsteps, countless other plastic surgery social media accounts have sprung up online. Many show surgical procedures through daily invasive videos of the patient before, during and after the surgery. It’s not uncommon for someone to log onto Instagram and see a start to finish video of someone getting a tummy tuck on the Explore page.

New York City plastic surgeon Matthew Schulman said in a VICE interview that when he posts these videos, he helps educate people on the ins and outs of surgery. Schulman also said that his patients “tend to be younger.”

Think about the demographics of the majority of Snapchat users: teenagers. The availability of seeing a step-by-step video of someone getting a breast augmentation on your iPhone screen normalizes these procedures. The constant stream of “before” and “after” images on social media subconsciously—and maybe even unintentionally—tells people that if they look like the “before” picture, they should feel inadequate. Perhaps the worst part about this media exposure is that the girls in the “before” photos always look completely fine.

But because they don’t possess a figure akin to a Kardashian, their body just isn’t good enough. Mutilating and cutting up your body to appear more desirable to others shouldn’t be considered the standard for beauty.

With the rise of celebrity YouTubers and online personalities, it’s hard to miss how regular these non-essential procedures have become. Lip injections are basically a right of passage for someone with a large social media following. These social media personalities don’t hide it, either, often vlogging their entire experience and flaunting the results to their young followers. Some influencers are even paid or given free procedures as part of sponsored posts to promote specific doctors and treatments to their followers.

Since the pandemic started, it makes sense that more people feel the need to alter themselves surgically, especially when they are sitting at home scrolling through social media all day. In an ABC News interview, Dr. Heather Furnas, a plastic surgery associate surgeon in Santa Rosa, California, said that quarantining has only made the desire for surgical procedures grow.

“It’s like there was this pent-up demand for surgery–breast augmentation, breast lifts, tummy tucks…demand is huge,” Furnas said. “We filled up immediately.”

I recently discovered the popularity of vaginal rejuvenation surgery, or labiaplasty, among young girls. In this procedure, the surgeon reduces the size of the labia minora by quite literally cutting off excess skin. If you know anything about women’s anatomy, you know that the clitoris has nerve endings that extend all over the labia. This means that women who have this procedure are potentially forgoing sexual pleasure to maintain an aesthetically pleasing vulva.

Dr. Julie Strickland, the chairwoman of the American College of Obstetricians and Gynecologists, said that lack of pleasure post-surgery is possible. “The big thing I tell patients about labiaplasty is that there are a lot of unknowns,” Strickland said. “The labia have a lot of nerve endings in them.”

I cannot fathom a woman deciding to have terrible sex for the rest of her life to appeal to a sexual partner who does not notice or care. Yet, the amount of women who go under the knife for labiaplasty grows every year. In 2016, of the 12,000 labiaplasties performed in the United States, 500 were for girls under the age of 16.

This procedure furthers the idea that every single feature on a woman’s body exists solely to please others. Bodies are functionary. They help us learn, move, and create, not just “look pretty.”

I understand why someone would feel pressured to have a surgical procedure, but it’s important to note that without these now normalized surgeries, it’s likely that more people would feel good about the way they look naturally. The decision to undergo surgery is invasive and personal, and any adult who wants a procedure should be able to get one. But it’s also worth noting that the message behind these procedures can be harmful and getting surgery to alter your appearance continues the cycle of unrealistic body standards.

I don’t see this rise in cosmetic surgical procedures slowing down. It’s so easy for someone, especially young girls, to feel disgusting when they open Instagram and see bodies being surgically altered to look less like them. You don’t look unattractive or disgusting because you have a regular body. You look like a normal person.