Softball in the Sunshine State: Lions lead off year 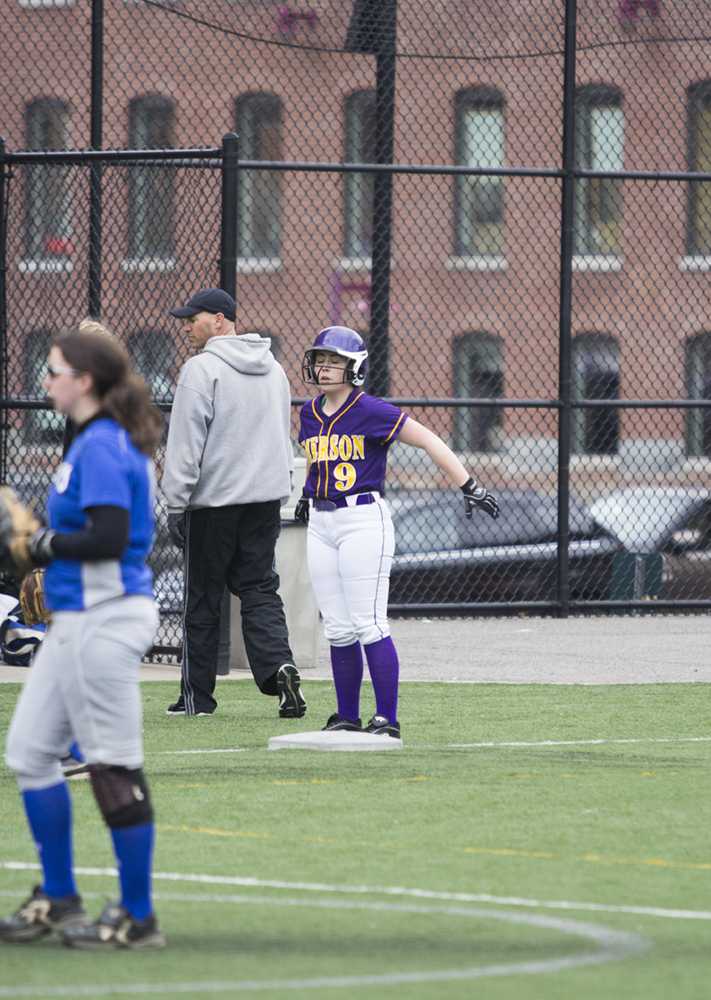 Playing 10 games in seven days of 80-degree, nothing but sunshine weather, it was all balls, bats, and bases for the Emerson softball team, who got a sampling of their squad’s talent in its annual trip to Florida.

Stationed in Clermont, about 25 miles west of Orlando, the Lions spent their spring break taking on competition from eight different conferences and seven different states. All five days of action featured a double-header, with two days off in between.

“[In Boston] you have to coexist your games with your life, and there it’s just all softball all the time,” sophomore outfielder Jacqueline DeFusco, a journalism major and former Beacon correspondent, said. “It’s a really great platform for team bonding.”

In their first matchup with Boston rival and former conference opponent Emmanuel College on March 6, the Lions tied the Saints 1-1 in the bottom of the fifth, then took the lead by two runs in the sixth and won their season opener, 3-1.

Emerson then found themselves on the losing end of their next four contests and were outscored 22-10 during that stretch, while testing the right sequence of players on the field, according to head coach Phil McElroy.

In their second matchup of the day on March 9, the Lions compiled a seven-run fourth inning and went on to beat Juniata College 13-6 in a five-inning meeting.

After beating Wesleyan University 6-3, Emerson completed their tour by losing to Concordia University Wisconsin 3-0 the next day. They finished 4-6 with 46 hits, 60 runs, and a collective .239 average.

“We went in with a lot of hope that we had a lot of good athletes and a lot of raw talent,” DeFusco said. “On one hand, we definitely have a lot of room for improvement and have plenty of time to do that, but at the same time we came out of the games pretty impressed with ourselves.”

One area McElroy said he is focused on is pitching. Corey earned a 3-2 record in five starts, completing four games. She struck out 27, walked four, and currently has a 2.74 ERA. The other two pitchers, for Emerson—Cash and sophomore Casey Tsamis—fared quite differently.

Cash went 0-2 in four contests with five strikeouts, while Tasmis went 0-2 in six contests, struck out three, and gave up 14 runs.

McElroy said that there is a significant difference in the throwing style of his hurlers, and that he and his fielders need to adjust accordingly.

“Casey is the type of pitcher who isn’t going to have a lot of strikeouts and doesn’t throw as hard as Sam does, so they’re going to put a lot of balls in [play] against Casey,” McElroy said. “We need to make sure that our defense plays well around her.”

McElroy adapts to his throwers by shifting his grass players closer to the dirt, he said.

“Typically they play a little deeper when Sam is pitching because she throws the ball hard and there’s a saying in softball—the harder it comes in, the harder it goes out,” McElroy said. “Casey doesn’t throw it as hard, so a lot of times there’ll be pop-ups behind second base or shallow center field, so we focused on moving our outfielders in and that made a big difference in the last couple games she was in.”

The matchup with Emmanuel was not all that different from the rest, according to McElroy, in that there was a lack of widespread hitting, which caused the burden of getting on base and getting home to fall on only a few players.

“They need to start stringing stuff together because there were a couple games where we had one player get a couple hits and then the rest of the players didn’t do anything,” McElroy said. “We need to find ways to all be effective at the same time.”

It all comes with the minimal exposure of the squad, McElroy said—14 of 18 members are freshmen and sophomores.

“A lot of it has to do with being young and knowing the difference between when to be patient as a hitter and then when to be aggressive as a hitter,” McElroy said. “We just don’t have that experience factor yet.”

McElroy said he liked what he saw down south, and moving forward hopes that a patchy start with a strong finish will set a precedent for the remainder of the season.

“We have to continue to climb up and not take any steps backwards now,” McElroy said. “It was a rough beginning but hopefully we were able to learn a lot in those first couple of games.”

Emerson (4-6, 0-0) will play their first contest back home against Fisher College (0-10) in a doubleheader Friday, beginning at 3 p.m.