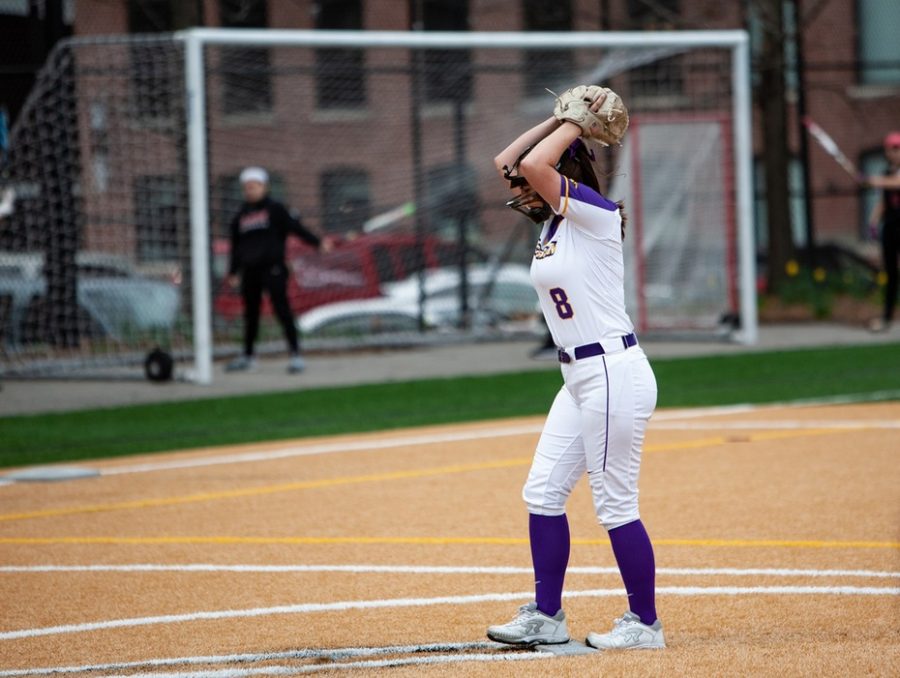 Senior pitcher Neely Eddleston at the mound for the Lions.

The Emerson softball team lost both games in its weekend doubleheader against the United States Coast Guard Academy on Saturday.

The first game started off with a bang as the Lions jumped out to a four-run lead. Senior catcher Lindsey Lowe scored the first run off a single from junior outfielder Mary Kuczkowski.

The Lions then capitalized off fielding errors by the Coast Guard Academy. Freshman infielder Claire Overton reached base due to an error and moved just 60 feet away from home plate following a passed ball. The error set up first-year infielder Mackenzie Killough to drive Overton home, and she did just that with a single to left field.

The Lions would hold the lead up until the fifth inning when the Coast Guard Academy offense posted eight runs—giving them a six-run lead. The game ended 10-4.

The team aimed to split the series but wound up being shut out by the Coast Guard Academy. Head Coach Phil McElroy said the young team struggled with the mental aspect of bouncing back from tough situations.

“I think that right now we have a little bit of a problem being able to separate and move on from something bad that happens, but we are a very young team right now,” McElroy said in a post-game interview.

The game lasted just five innings after Coast Guard Academy put up eight runs in the first two innings. The Lions were only able to muster one hit and made four defensive errors. Senior pitcher Neely Eddleston gave up all eight runs, but only two were earned through one and two-thirds innings. The final score was 8-0.

Following the defeat against Coast Guard, McElroy said the team will be looking to improve in all areas before next weekend’s home opener.

“Talking more about our game plan when stepping into the batter’s box,” McElroy said. “We’re gonna be working on some defensive miscues we had out there and then we are going to continue working on our pitching, we need to get ahead in the count.”