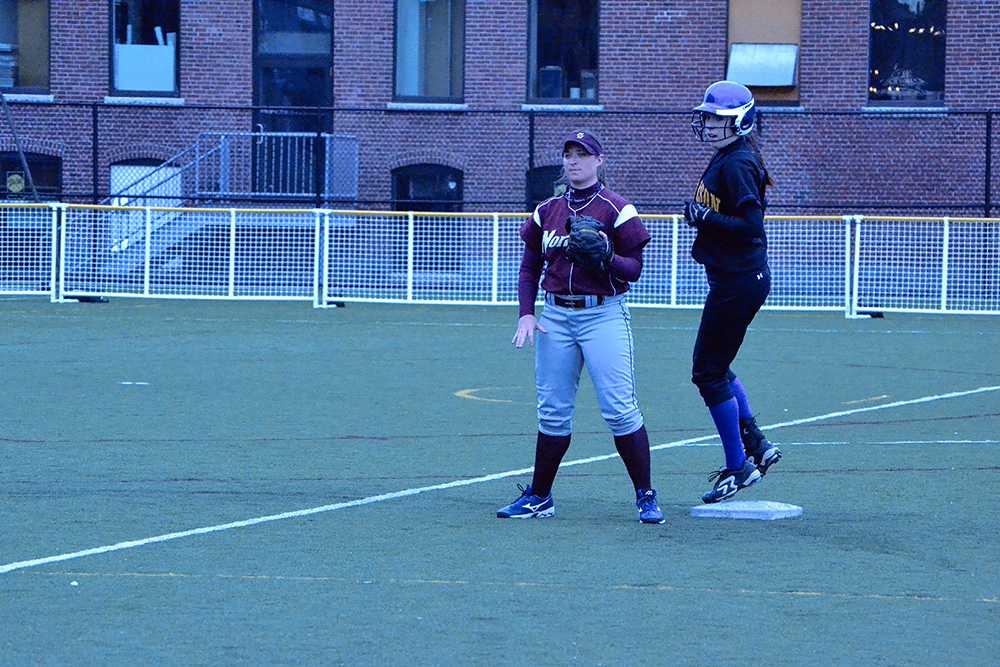 McElroy has, after all, coached Emerson to the Great Northeast Athletic Conference playoffs in each of his 13 previous seasons. But it looks like respect won’t be given out for free as the Lions transition to the NEWMAC this year.

“The preseason poll was a little bit surprising to me,” said McElroy, Emerson’s longest-tenured coach. “I do think we’re a little bit better than where they have us, but that’s okay. That’s fine.”

The Lions have three games left before kicking off their NEWMAC schedule on Wednesday with a home doubleheader versus Wellesley at 4 and 6 p.m. at Rotch Field in the South End.

They’re currently at 3-3 after a trip down to Clermont, Fla. during spring break. McElroy said the Lions had one strong win—3-1 over DeSales University of Pennsylvania in the opener—but that they also had two poor performances where games got away from them.

“Most people think about Florida as spring training because baseball teams go down to play scrimmage games,” said McElroy, who used a string of non-conference foes to tinker with his lineup card. “I think you kind of go down with an idea of who should be your starting team.”

McElroy said things are now coming into clearer focus ahead of their NEWMAC schedule, and it shouldn’t be too hard with a team of familiar faces that includes three 2013 GNAC First Team All-Conference players in Shannon Torosian, Brittany Rochford, and Bianca Buono.

Those three headline a crop of six seniors that, as McElroy puts it, “have played a lot of games here.” The group also includes the starting pitching tandem of Alicia Daniele and Alexandra Magistro, along with catcher Tatiana Motevalli-Oliner.

“As you get closer to the end, things always become a little different,” said McElroy, acknowledging the final go-round for his long-time contributors.

It’s not all old hat with the team, though, as McElroy expects freshmen Alicia Giannelli and Monique Medina jump into the mix this season, with both trotting out with the starters down in Florida.

“If you’re starting on our team as a freshman, that means you’re pretty darn good,” said McElroy.

And Giannelli has been so far.

The freshman blasted a solo home run in her third college at bat to cap off Emerson’s season-opening win. She also boasts a team-best .444 batting average through 18 at bats.

Giannelli and Medina have both become stalwarts in the top half of the batting lineup.

McElroy said he knows he will need all weapons at his disposal while he tries to keep the team as competitive as ever in the NEWMAC. This senior crop is used to winning, going 80-36 over its first three seasons, and taking the GNAC Regular Season title in both 2011 and 2012.

“The GNAC was a conference that was broken up into thirds,” McElroy said. “It was the teams that were always contending, which I think we were there. There was a middle group with your average teams that you have to play well to beat them. Then there were those have-nots at the bottom that just didn’t have enough to compete. There are no have-nots in the NEWMAC.”

“There’s a couple of teams I think are better than us, where pitching-wise they have dominant pitchers,” McElroy said. “We have solid pitchers, but maybe not a dominant one.”

That means a team with four players who hit .343 or better last season—sophomore speedster Amanda Horton was a GNAC Second Team selection—will hope their success at the plate carries over into the NEWMAC as Emerson aims to post its 11th straight winning season.