Sophomore dies after altercation at party in Brighton 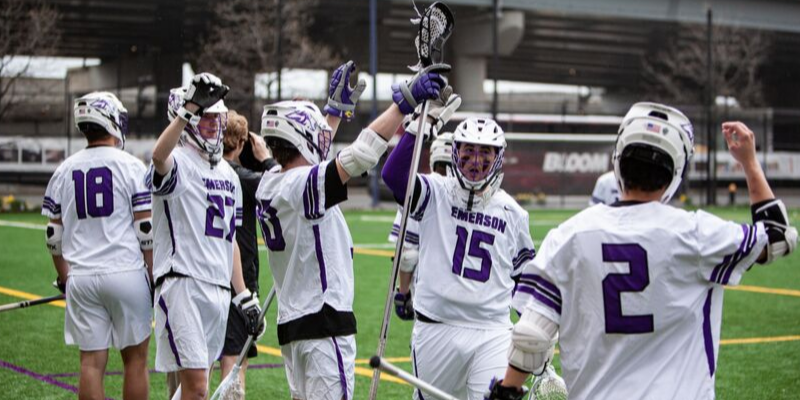 Daniel Hollis (No. 27) died after an altercation in Brighton. Photo courtesy of Kate Foultz.

Sophomore Daniel Hollis died on Wednesday at 5:32 p.m. after a Saturday confrontation in Brighton sent him to a local hospital with extensive injuries to his brain, according to a statement from the college.

Hollis and his friends were leaving a party around 1:20 a.m. on Sept. 28 when they were confronted by another group of college-aged men. Hollis sustained injuries to his head when he was hit and fell on cement, according to an email from President M. Lee Pelton to the community.

“Our deepest appreciation goes to all who have kept us in their thoughts and prayers,” family members wrote in journal entries on caringbridge.org. “We ask you now to turn those prayers and good wishes to the many friends and family who have to learn how to live with a little less sunshine.”

Boston Police Department and the Suffolk County District Attorney Office are currently conducting an investigation into the assault.

“This office is working closely with the Boston Police Department as the investigation into this tragedy continues,” a spokesperson for the Suffolk County District Attorney wrote in an email statement to The Beacon. “We offer the victim’s family our heartfelt condolences and will provide more information when, or if, it is appropriate.”

The marketing and communications major played on the men’s lacrosse team as a goalkeeper. Matthew Colombini, the coach of the team, said he met Hollis for the first time in September 2017.

“I remember meeting Dan for the first time in person and knowing immediately that he was the perfect fit for our team and community—instantly he was someone that I wanted to be around and coach,” Colombini wrote in a statement to The Beacon. “Day in and day out he provides energy and laughter, an upbeat presence that is needed during a long season. Everyone around him was better because of it.”

Hollis underwent surgery on Saturday which was initially successful, according to the journal entries. Doctors later said Hollis had suffered irreparable brain damage and would not recover.

“In speaking with Jennifer Kelly, Dan’s mother, I learned what a precious and effecting gift he was to all who were privileged to know him and count him as a friend,” Pelton wrote in his email. “He moved through the world with uncommon authenticity and humility. He had a generous heart. He was a giver, not a taker.”

Hollis attended Hopedale High School and played hockey and lacrosse throughout his years there, Hopedale Principal Derek Atherton said in a phone interview.

“Dan was a great kid,” Atherton said. “A very conscientious, very caring individual. He’s a really great guy who was always very respectful and responsible. People just gravitated to him, he had that energy that made you want to get to know him.”

Pelton said the college plans to hold a celebration of Hollis’ life in the coming weeks but did not include any further details.

His email included the operation hours for ECAPS and the Center for Spiritual Life.

According to the statement, Rev. Julie Avis Rogers will lead a vigil in the Semel Theater on Oct. 3 at 12 p.m. The college plans to keep the theater open from 9 a.m. to 5 p.m. for quiet reflection.

Hollis is survived by his father Jason, his mother Jennifer, and his sister Kate. According to the family’s latest journal entry, Hollis chose to be an organ donor.

“We pray that his gifts will prevent other families from experiencing the heartbreak we are currently experiencing,” the family wrote.