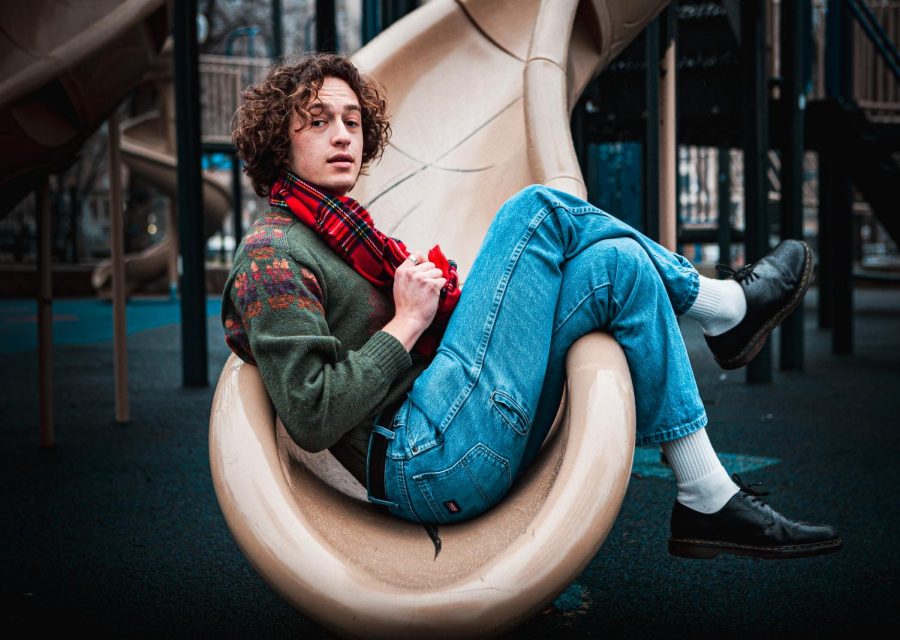 Sophomore Mackenzie Morris was relaxing on a sand dune in Venice Beach, California, listening to music with his friends, when his recently released song “Stuck” began playing.

“It just came up and we were, like, screaming it,” Morris said. “We were just singing, and we realized that’s our art. We made that together, and then you’re allowed to enjoy it.”

Morris’ song “Stuck” played at various other locations, including The Mint—a music venue in Los Angeles where he earned his first musical commission—and the Lion’s Den, where he played at the launch party for Five Cent Sound Magazine. His extended playlist titled “Ode to Adolescence” debuted on Nov. 15, 2019 and has amassed 4.5 thousand streams. The EP features five songs: “Overthought,” “Alone Time,” “Stuck,” “Creative Caller 911,” and “Butterfly Kisses.”

His songs combine saxophone, drums, guitar, keyboard, and vocals. The jazz element of the saxophone, mixed with Morris’ pop melodies and bass lines, culminates into what Morris describes as “jingle pop.”

While Morris creates the majority of his song components, including the melodies, lyrics, and vocals, he said he enlists help from friends for the production process. Carl Stoodt, a friend of Morris’ from Los Angeles and graduate of Berklee College of Music, professionally mixed and mastered the EP.

“Before [the EP] got to Carl, it sounded like it was made on a computer,” Morris said in an interview. “It sounds beautiful because of his ear. I am very grateful for him.”

Inspired by artists like alternative R&B connoisseur Steve Lacy and genres like bedroom pop, Morris’ songwriting journey began at the end of his senior year of high school in 2018. By the end of August that year, Morris had four songs he considered satisfactory. He found inspiration for his fifth song, “Butterfly Kisses,” while dealing with the difficult goodbye of leaving home for college.

“[The EP] sounds like a teenage boy singing about girls and past experiences,” Morris said. “Whatever was whipping me left to right internally—that’s a weird expression.”

Dean Gordon, a friend of Morris’ since the sixth grade, plays the saxophone on “Stuck” and “Overthought.” The recording session with Gordon lasted almost five hours, and took place at Morris’ house, where they wrote and recorded the rest of the EP.

“It was really fun just seeing how far Mackenzie has developed as a musician,” Gordon said in a phone interview from Amherst College.

Senior Mia Manning, who used to coordinate events for WECB, invited Morris to play at Center Stage for WECB’s Open Mic in spring 2019.

“He told me that he played music, and so I was like, you should play this open mic right now,” Manning said in a phone interview from Emerson’s Los Angeles campus. “He was like, ‘I don’t have a keyboard,’ so I found him a keyboard. And then he played on the spot the music that he made. And it was really good.”

Morris worked on the EP from summer 2018 to fall 2019, a period of growth for his music career, he said.

“I find [the process] really fun and collaborative,” Morris said. “It’s amazing for me to see where things start and where they finish and look back months later and enjoy it.”

While Morris said that he does not like listening to most of his own songs, “Stuck” is his favorite of the five on his EP.

“What people don’t see is how many times I screw up,” Morris said. “How many times I’m not satisfied with what is coming out of my mind.”

In the future, Morris said he will continue making music as a hobby while utilizing the Boston music scene. He plans to spend the upcoming weeks recording new music.

“I can say I did it, which is honestly cool,” Morris said. “It’s cool to think that anyone, if they really wanted to, could listen to this lanky white male. His music is now out and about on all streaming platforms.”