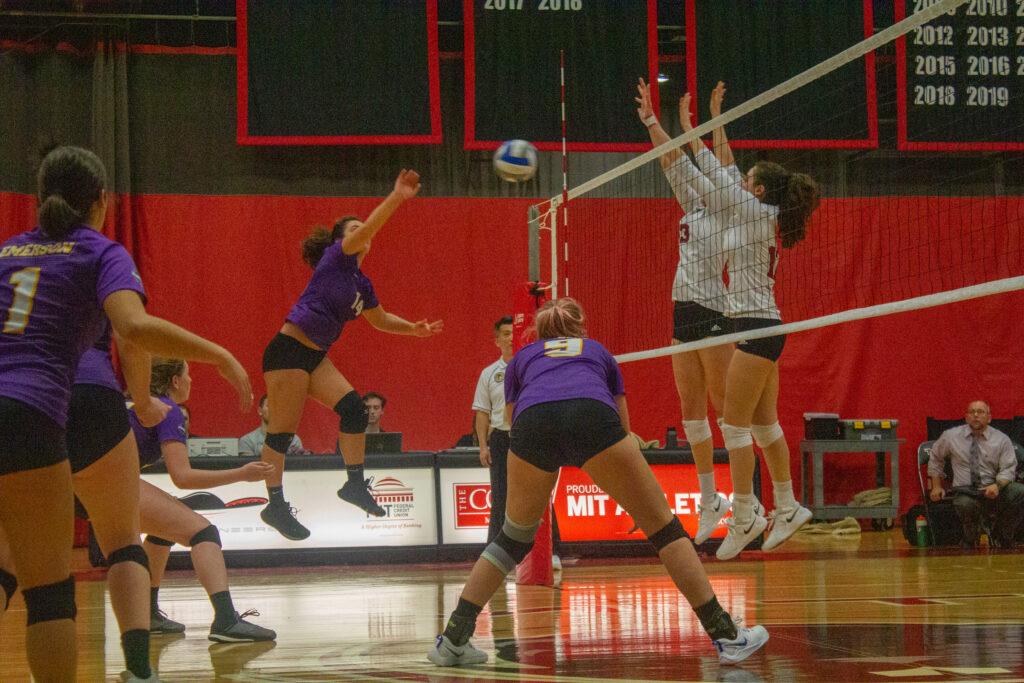 As Carolyn Vaimoso lay on the court after falling in the first set of a conference matchup against Coast Guard in September 2018, the only thing going through the then freshman’s head was that she definitely was not injured.

“I have this dumb mentality that I never get injured, because I had never really gotten injured before,” Vaimoso, a sophomore outside hitter for the women’s volleyball team, recalled in an interview. “When I was on the ground I first thought, ‘This floor is slippery,’ because I thought I slipped, and the second thought I had was that my knee is just in shock—I’ll be fine, I’ll shake it off.”

She reassured the team’s athletic trainer everything was fine and told her to put her back into the game. However, Vaimoso exited the game and did not return. Two weeks later, an MRI scan revealed she tore her ACL, MCL, and both sides of her meniscus. Only nine games into a promising freshman year, Vaimoso’s season was over.

“I love volleyball with all my heart, and I had never gone for such a long period of time without playing volleyball,” she said. “When that happened, it was kind of a culture shock. I had to adapt my life around not practicing and not being able to workout.”

Vaimoso was among the four injured starters for the women’s volleyball team in the 2018 season. While her loss did hurt the team, head coach Ben Read said Vaimoso responded well to the injury.

“When someone has a season ending injury as serious as that, it’s easy to go ahead … and get down on yourself and not be there for your team, and she did almost the complete opposite,” Read said in an interview. “She wanted to be at as many practices as possible. We had to tell her she couldn’t travel at times because of her having to keep her leg in a certain position, but she always put the team first, which really speaks highly of her and how much she cared about us.”

In the 2019 season, Vaimoso is back and starting for the Lions. She ranks third on the team in kills per set and second in digs per set, while also claiming Lion of the Week and New England Women’s and Men’s Athletic Conference Defensive Athlete of the Week for the week of Oct. 7. Read said having her back helped the team this season.

“For pretty much the whole season she’s been one of our most dependable people,” Read said. “[She’s a] consistent server, consistent passer, probably our best defender out there on the court, and offensively she’s really grown into that role.”

Vaimoso credits her teammates for helping her recover from her injury and finding success.

“We have an amazing freshman recruiting team that came in and they really boosted all of our spirits and gave us hope,” Vaimoso said. “It feels good to have the support because I didn’t think I would be able to come back and I was definitely afraid of hitting, so having [Caroline Bond] as a setter has been super clutch.”

Vaimoso is known by her coach and teammates for her passion and the energy she brings to the sport. She said her teammates would describe her as the comic relief. Junior outside hitter Grace Tepper said that, while Vaimoso definitely helps them laugh, she brings much more to the team.

“She will never really talk about her importance to the team herself,” Tepper said in an interview. “I think it’s important that someone else says that. She’s very integral to the team culture.”

Read recalled when Vaimoso played an April Fools’ Day prank on him, she came into his office and told him she planned to quit the team. This caught Read off guard, especially since she just put in a lot of effort into recovering from her injury.

“It was a joke, thank God, because we would definitely be a different team without her,” Read said.

Coming from an athletic family, Vaimoso said she tried every sport as a kid and recalled playing football in her front yard with her three brothers, two of which are older. She began playing club volleyball in sixth grade because she believed it was the best way for her to continue playing the sport in high school and college.

Vaimoso, who grew up in Los Angeles, California said she did not look for colleges on the East Coast when applying for schools. However, her high school coach brought Emerson to her attention because he thought it would fit her well.

“Volleyball was a really important part of my life, but it abstained me from doing other things I was interested in, like media and working for television or theater,” Vaimoso said. “My coach proposed me this school that had both volleyball and the communications courses I wanted to take. Emerson definitely intrigued me, and I fell in love with Boston the second I stepped in.”

Off the court, Vaimoso said she loves to go for walks around Boston in places like the Public Garden, Boston Common, and the Esplanade, since she loves hiking and the outdoors.

“I’m very nature-oriented, so basically anywhere that shows foliage during the fall is my favorite place,” Vaimoso said.

Vaimoso also described herself as a “low-key musical theater nerd” and loves to see musicals and plays in her free time. While in high school, she did theater and featured in multiple musicals, including And Then There Were None.

“It was my first non-musical play, and I depend more on singing than I do acting, so that was definitely a challenge, but it was fun,” Vaimoso said.

Vaimoso, a communications studies major, said she chose the major because of its versatility in regards to future careers.

“I feel like I switch it up [a lot]—I am a Gemini, so I have many interests,” Vaimoso said. “I’m very interested in media so maybe working within television or major corporations like Buzzfeed.”

The Lions have one game left in the season, a home matchup with Springfield College with major playoff implications. Vaimoso said she has high hopes for the team when they start NEWMAC postseason play.

“We’re a tournament-oriented team,” Vaimoso said. “If we’re in it already, I don’t see why we should lose now.”