Speaker draws connections between drug use, immigration, and violence 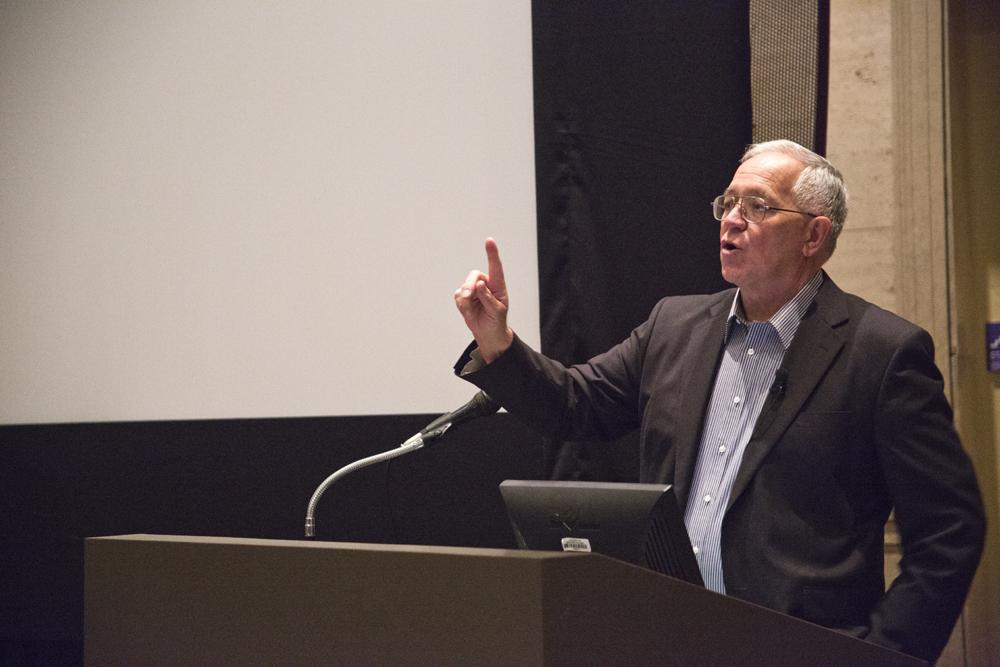 Ruben Garcia couldn’t stand still behind the lectern. He moved from side to side, spliced the air with his hands, and widened his eyes behind silver-rimmed glasses as he began his talk about immigration to an audience of over 50 Emerson students, faculty, and staff in the Bill Bordy Theater on April 9. He said he hoped to upset them because he wanted them to understand their connection to immigration, even though more than 2,000 miles separate Boston from the U.S.-Mexico border.

Garcia spoke at the college for “A Nation of Dreams: A Conversation about Immigration with Ruben Garcia,” hosted by student organization Emerson Understanding National Immigration Through Education, or UNITE, as part of its initiative to begin a dialogue on campus around immigration.

“As I look over this young group of people, I know some of you have been at parties where marijuana was smoked and cocaine was snorted,” said Garcia. “I’m here to say the blood that’s being shed in Mexico is partly started right here in Boston among Emerson students.”

Garcia said one of the main reasons immigrants from Central America flee their countries is because of the violence in their communities caused by trading in drug cartels, an effect he said manifests all the way in Boston.

“You try to wash your hands of the responsibility, but those families in Mexico are tortured, kidnapped, and killed,” he said. “When they flee their country, we say ‘no’ to them at the border as if we have some level of righteousness to say it.”

Garcia, a native of El Paso, received his bachelor’s degree from Rockhurst University in Kansas City, and studied in the Pastoral Studies graduate program at the University of Seattle, according to the Annunciation House website.

Garcia said the organization, which is housed in a two-story, red brick building located just 10 blocks from the U.S.-Mexico border, didn’t have any funding when it started, and still can’t accept any government money—Annunciation House is sustained entirely by individual donors and volunteers, like the group of Emerson students who fundraised to fly to El Paso last spring on an Alternative Spring Break service trip.

Participants of the 2013 ASB service trip said they started Emerson UNITE because they felt a responsibility to teach their peers what they learned at the border, said member Andrea Gordillo.

Gordillo, a senior performing arts major and immigrant from Peru, said she was an undocumented citizen in the U.S. for 11 years. She said she wants to increase awareness about immigration at Emerson because everyone in the community is touched by the issue, including herself, other students, and many of the college’s maintenance workers.

“Ruben’s visit gives us a little bit of the puzzle to better understand the immigration system in the U.S. in order for us to be a more inclusive institution,” said Gordillo. “Immigration is not fully specific to the border. It affects all of us.”

To illustrate another example of students’ economic connection to immigrants, Garcia proposed everyone stand in a circle, examine the labels on their clothing, and if an article of clothing was not made in the United States or made by an employee earning at least a minimum wage, the clothing should be taken off and thrown into a pile at the center of the room.

Bianca J. Padró Ocasio, a member of UNITE, said Garcia was trying to help students understand their role in immigration reform, from watching the products they consume to participating in conversations like his lecture.

“We have a personal and direct responsibility to immigrants,” said Ocasio, a sophomore journalism major. “As an institution of higher education, this is something we need to be talking about.”