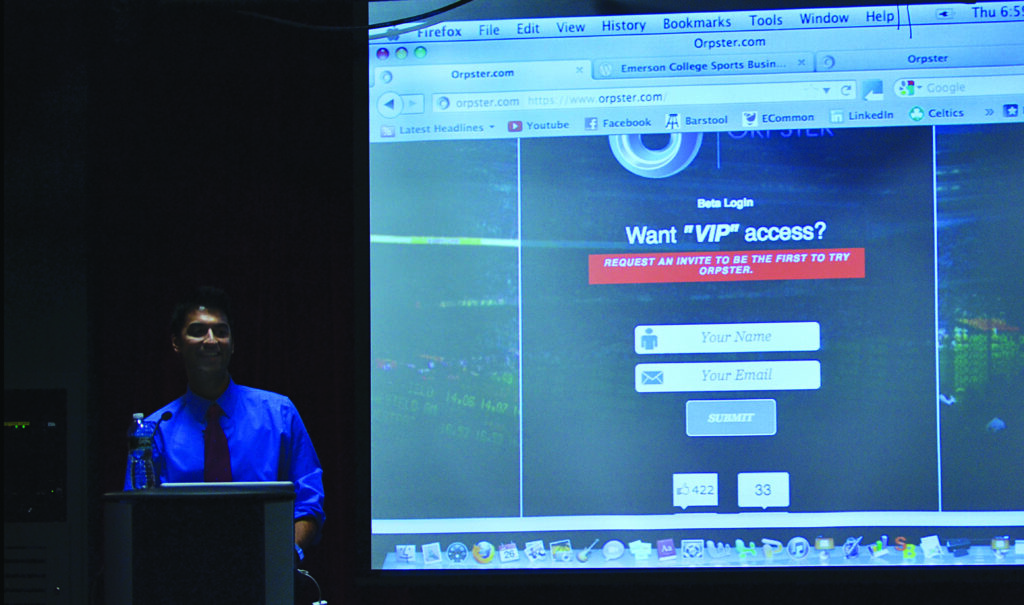 The Unlawful Internet Gambling Enforcement Act of 2006 effectively outlawed online gambling in the United States —with one notable exception.

Fantasy sports, with some provisions, were ruled to be games of skill, not chance, and therefore legal. It was this exception that inspired a teenage Rehan Hussain, who spoke as a guest of the Emerson College Sports Business society on Thursday evening.

Hussain, who grew up in Longmeadow, Mass., is the now 22-year-old founder and CEO of Orpster, a website that seeks to capitalize on the 29 million Americans who play fantasy football every year, with a new kind of game.

“[Orpster] followed me on Twitter out of nowhere, and I went to their website to see what it was and thought, awesome. This is perfect,” said Swarttz.

Hussain was originally coming to Boston to pitch to potential investors, but jumped at the opportunity to speak to the business society.

Swarttz, a junior marketing communication major, said it was Hussain’s youth and creativity that led him to invite the entrepreneur to Emerson.

“Any sports business owner who has just graduated college is awesome for us to talk to because they’re the most relatable to our members,” Swarttz said. “The idea of combining one of the most purely business concepts — the stock market — with sports, was just a fascinating concept.”

Orpster is a website where users can buy and sell stock in professional athletes throughout the course of the season, losing or making money each week based on performance.

Calling the website a sports stock market, however, is somewhat overcomplicating it. Hussain said Orpster is first and foremost a site intended to entertain. It’s a game, designed to give fans an opportunity to win money by applying their knowledge of sports.

“I wanted to target casual fans, fantasy players, not day traders,” Hussain said. “Everything is simple. The interface is really easy to understand.”

Essentially, the point of Orpster is to identify players who are going to have big games before they have them. The fluctuation of player values is based entirely on statistics. Injuries and popular perception of the player’s personal life don’t factor in at all.

An algorithm sets the value of each player at the start of the week. A user can then buy stock in players before their games. If a player performs better than expected, his stock rises. If he performs below expectations, his value drops. Users must cash out at the end of every week. Then the math resets, and the process begins again.

Hussain spent most of his time at Emerson answering questions from the modest crowd, explaining his company, and offering advice on starting a company at such a young age.

The Society’s Vice President of Marketing Molly Wolfberg said Hussain was able to give the crowd a glimpse at his company’s inner workings.

“You can’t go to the website and see what it is, so it was interesting to get a sneak peek into it,” she said. “It was very cool to see … all of the logistics behind it. He talked about all his programmers.”

Orpster is currently still in beta, with around 400 users and thousands more on the waiting list. At this point, the only players available for users to buy and sell are National Football League quarterbacks. As Orpster collects more capital and develops the logarithms required to process the statistics, the company will be able to support more users and encompass additional sports.

Orpster will eventually be open to anyone, but at this early stage, the company doesn’t have the capital to cover the potential winnings it could owe to a larger group of members. Therefore, membership is restricted.

When it comes to spreading the word about his start-up, Hussain has a plan for that as well.

“Social media is the most powerful tool when you’re starting a company. Before I even consider [allowing someone to join], they have to invite five people,” Hussain explained.  “There’s always going to be at least five times as many people on the waiting list.”

Wolfberg said potential entrepreneurs can learn a lot from Hussain’s use of social media.

“Since it is a startup, one of the most important aspects of a new business is reaching out to consumers and having a conversation with them,” the junior said. “It definitely shows that you can use social media to your advantage.”

Despite his extensive research, Hussain still isn’t entirely sure what he’s doing is legal. His company falls in the gray area between fantasy sports and gambling, and he runs the risk of finding himself in hot water should laws change. Swarttz said he is inspired by this type of determination.

“He’s doing this knowing he could get shut down any day. He’s still going through with it because he has faith in the company,” Swarttz said in a phone interview. “It’s really impressive.”

Hussain said he will continue to work, expanding his company and securing investors.