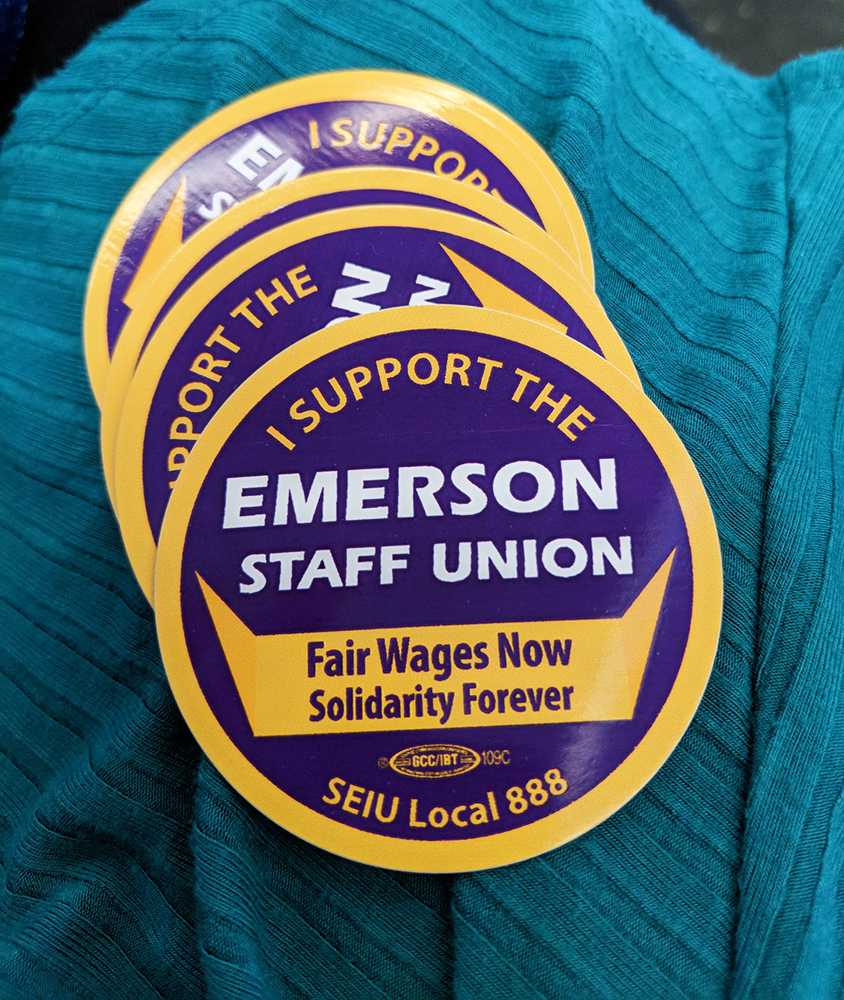 The Emerson Staff Union is hoping to have some of their sacrificed benefits reinstated, especially for some of the at-risk staff members.

By Bailey Allen and Vivi Smilgius

Members of Emerson’s staff union took to the streets this week amid contract negotiations with the college, demanding the college increase hiring in several areas that they say are already severely understaffed.

The union distributed leaflets outside the Dining Center on Monday, which urged students to follow the staff union on social media and support its efforts to unfreeze the college’s hiring practices. Many Emerson departments have been operating at a quarter or, in some cases, even one-fifth of normal, pre-pandemic levels, according to Union Chair Dennis Levine—a situation that causes employees to suffer, forced to take on tasks on top of their own jobs.

This is the union’s second call for increased support from college administrators, after many negotiated benefits were taken away during the pandemic.

Administration officials could not immediately be reached for comment on the matter.

Union members argue that the delay is not only harmful to workers, but also to the effectiveness of the college as a whole.

“When a department is already buckling because it’s understaffed, it’s only a matter of time before people are like, ‘Why am I working so hard and being underpaid? I’m going to leave,’” said llona Yukhayev, a staff union member passing out leaflets in the 2 Boylston Place alleyway. “People are not going to travel or find themselves. People are going from one job to another for better pay and more flexibility.”

Departments are so short-staffed and strapped for cash that faculty are asked to fundraise for assistance they require on the job, Yukhayev said, meaning that already-crumbling departments are losing even more members who can’t get the help they need to do their jobs.

Levine brought attention to delays in certain understaffed departments such as information technology, attributing the delay in service to outstanding vacancies.

“What a lot of people don’t realize is that the school itself has lost lots of people over the last couple of years,” he said. “Due to hiring freezes, consolidation, and whatever else [the administration is] coming up with, they haven’t been replacing these staff members.”

The mass departures from the college for higher paying jobs aren’t surprising to Levine, who blamed the pressure many staff members are under. Levine added that this stress is one he understands.

Yukhayev said she and other union members are calling on the administration to pay workers better and adequately staff departments to prevent hiring droughts like the one the college is currently facing.

“We wanted to get the message out to everybody,” Levine said. “It’s like, ‘Hey, there’s a problem.’ Everybody needs to be aware of it. People need to start putting some pressure onto the administration to start raising pay to retain these people, because we’re losing a lot.”

While the union needs to reach a wide audience, Levine said the Emerson community—particularly students—will be the deciding factor in the success of the negotiations.

“If you stop and think about it, the students are the ones who are paying the tuition and the room and board,” Levine said.

“You’re paying an awful lot of money, but your services are starting to lag,” he added. “To get the service up to where it really needs to be, we need to hire more people. We need to retain people. And students need to understand that your money is being spent somewhere. Where’s it going?”

Union members are also seeking to address what they see as a hiring bias against women and people of color at Emerson.

“It’s just hard for minorities and for people of color and women to move up,” Levine said. “We’ve had some very qualified candidates who were looking to move into manager positions and they were overlooked, for reasons we don’t quite understand.”

Yukhayev called on Emerson students and staff to get educated, raise awareness, and pressure administrators to consider the union’s proposal and make much-needed changes. She added that community involvement can make or break agreements like the one the union seeks.

“We need our community to know that there’s a problem so they can support us when we’re trying to resolve this issue,” Yukhayev said. “We saw in our first contract negotiation that when we got the community involved and we were able to apply pressure, [administration] changed their minds. It wasn’t through the strength of our arguments. It was through the pressure of the community.”

However, Union Treasurer Elbert Lee conceded that, despite success connecting with the student body, the leafleting may have fallen on deaf ears in the administration.

“As someone who works on campus five times a week, I want to say a lot of administration is actually working from home,” Lee said. “They may not even know what’s happening, what flyers are being passed out, what kind of protests or actions are happening on campus.”

“We’ve had three meetings, we’ve got another meeting [Thursday], and we are in active negotiations,” Levine said. “Proposals are going back and forth across the table. We’re trying to hash out some serious concerns and issues on both sides. We’ll see how it goes.”

“The people who are still left at the school, they’re staying because they love what they do,” Levine said. “They love the people that they work with, they like what Emerson stands for, but it’s getting harder and harder for those people to stay. Because economically, it doesn’t make sense.”