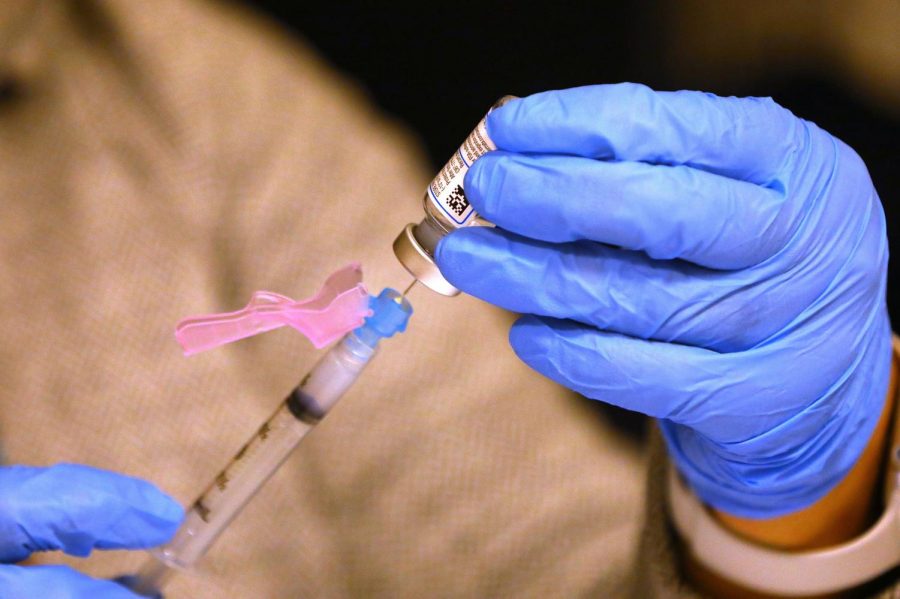 A clinician fills a syringe with a COVID-19 vaccine from a vial.

When the clock struck midnight on Monday, 1.7 million Massachusetts residents—including any Emerson students who didn’t yet qualify—became eligible to receive a COVID-19 vaccine, a signal of hope for students prompting eagerness and anxiety as an unprecedented academic year draws to a close.

The universal eligibility comes one month after Emerson announced its vaccine partnership with Tufts Medical Center had fallen through due to supply chain and timing issues, as there stands just ten days between the move to Phase Three of the vaccine rollout and the end of the semester. It also coincides with a modest dip in statewide coronavirus cases following a spike in late March and early April.

In order to book the appointments, students have cobbled together myriad tips and tricks, utilizing everything from pharmacy website workarounds to pre-registration through the state to travelling home to secure a shot.

Kadyn Darrow, a first-year marketing and communications major, pre-registered for a vaccination appointment on March 18 through mass.gov. However, she ultimately ended up booking an appointment for this Friday for her first dose at a Walgreens in her home of Canton, Mass, when the mass.gov website gave her trouble.

“There was a little bit of digging involved, especially to get an appointment that was closest to my house,” she said. “When I clicked on [mass.gov], it said ‘Sorry, this is all booked up.’ But then I would refresh the page, and then it said they had available time slots, so I tried to get one and then when I would finalize it, it said it was all booked up.”

Massachusetts residents lodged several criticisms at the vaccine rollout, including appointment scheduling hurdles, temporary halting distribution to hospitals to supply pharmacies and vaccination sites, and conflicts with essential workers over their eligibility. The Baker administration initiated a pre-registration system for appointments, which they say should facilitate a smoother vaccine rollout, according to The Boston Globe.

Despite the stumbling blocks, Massachusetts has rebounded from its February failing grade in vaccine distribution from the The Belfer Center for Science and International Affairs at the Harvard Kennedy School, now a leading state nationwide in administering shots. As of April 19, about 44.6 percent of the state population has received at least one dose of any vaccine, and 29.9 percent of the population are fully inoculated, according to The Boston Globe. As of April 19, nearly 600 vaccination sites collectively administer a 7-day average of 81,923 doses a day.

First-year visual and media arts major Serenity Velazquez received her first dose of the Pfizer vaccine at the Hynes Convention Center on April 11, after pre-registering through the Mass.gov website. Velazquez, who is the first person in her immediate family to get the shot, said she was eligible early because she is a smoker and has a body mass index that categorizes her as overweight.

“I wanted it before I go home to Florida where it’s basically impossible to get,” Velazquez said. “It definitely feels better to have that reassurance that all my COVID tests should come back negative now.”

Harry Robinson, a first-year business of creative enterprises major, traveled back to his hometown of Charleston, South Carolina at the end of March to receive the first dose of the Pfizer vaccine. Because he has Type 1 diabetes, he said he was eligible in South Carolina at the time, but not in Massachusetts. He and his family had to book their vaccination appointments nearly two months in advance.

“Three weeks after [the vaccine] came out, everybody over the age of 18 could get it,” he said. “It’s because literally a handful of people in my state were getting it, or in my town at least.”

Robinson received his second dose on April 15 at the Reggie Lewis Track and Athletic Center in Roxbury, Massachusetts.

Massachusetts—along with the rest of the country—paused inoculations of the single-dose Johnson & Johnson vaccine on April 13 at the recommendation of the Centers for Disease Control and Prevention and the Food and Drug Administration. The suspension was set in place to investigate a rare and severe type of blood clot found in six people out of the more than 6 million who had received the shot.

Some students expressed concern about their ability to receive a second dose of either of the currently in-use vaccines, as both require weeks-long waits between doses. The Johnson & Johnson vaccine, which requires just one shot, would have been opportune for those students who are set to vacate campus before residence halls close on April 30.

Rules vary state by state regarding if individuals can receive their second dose of a vaccine in a different state than their first, and availability across the nation is also a complicating factor, according to The Boston Globe.

On-campus students who receive their first of two doses prior to moving out can apply with the Office for Housing and Residential Education on or before April 26 for an extended stay in the residence halls to remain in Massachusetts to receive their second dose.

First-year visual and media arts major Natalie Sciallo said the halt of the Johnson & Johnson vaccines was a disappointment, but she still booked an appointment in her home state of Connecticut for the day after she moves back for the summer.

“The day I went to go schedule my appointment I realized that they had been paused and I was like, ‘Oh shoot!’” Sciallo said. “It’s scheduled for Thursday because I’m leaving Wednesday to go home. So I’m getting the COVID vaccine, like, immediately.”

Jack Tortland, a senior VMA major, said he is skeptical of getting a vaccine given the speed at which they were developed, a common misconception the CDC has repeatedly discredited.

“I’m still debating about it, because I definitely would like to get the vaccine in the future,” Tortland said. “But especially with the recent Johnson & Johnson issues, the blood clotting and stuff, [I’m] a little wary.”

Spencer Strickland, a first-year VMA major, said he received his first dose at Hynes Convention center after he became eligible in Phase 2 due to his asthma. Instead of applying to stay later in the dorms, Strickland plans on getting his second dose of the vaccine in his hometown of Freeville, New York, thanks to his mother, who is a nurse and signed him up for his second dose.

“As long as I have my card with me, I don’t think it’ll be an issue,” Strickland said. “They’ll just adjust where I got the second dose and everything should be good.”

After getting his second dose, Strickland said he “would be lying if I said I wouldn’t act more relaxed after,” but said he will still abide by mandated safety precautions.

“I’m sure I’ll be more eager to get out and do stuff, but I plan on keeping in mind that it’s not over yet,” he said.

For other students, Massachusetts appeared to be the most accessible state to get a shot.

Isabella Cubba, a first-year VMA major from Grosse Pointe, Michigan, said she hopes to get her first dose in Massachusetts and then receive the second dose from her health care provider at home.

Cubba said she often sees her grandparents when she’s at home, and wants to get the vaccine to minimize the risk that she infects them.

“I’ve seen a lot of people that have been trying to get it in before they go home,” she said. “We only have a short amount of time left and most people are going back to their families and being around siblings and their grandparents and things like that, so I think they want to go home fully vaccinated.”

Once students receive a vaccine, Erik Muurisepp, assistant vice president for campus life and “COVID Lead,” said they should upload their records to their Student Health Portal to be verified by the Center for Health and Wellness.

College officials have not yet announced whether or not the vaccine will be required for students come the fall, even as Boston University and Northeastern University have confirmed mandates.

Robinson said he anticipates the vaccine being required at Emerson come fall.

“A lot of us are predicting that it’s going to be like the flu shot next year, where it’s going to be required by the time you come back to school,” he said. “Which crossing fingers hopefully that’s the case, but a lot of the kids that I’ve talked to are planning on getting it either late May, early [June].”

Cubba said she believes the vaccine should be mandated by the college, but believes it’s important to honor valid exemptions.

“It would be a great thing to require the vaccine,” she said. “I also don’t think that it’s fair to make it a requirement for those whose religion that they practice doesn’t allow it, so I want to make sure that doesn’t cause problems.”

Darrow said mandating the vaccine in the fall is a way to restore some freedoms back to campus life.

“I know people are worried about it,” she said. “But I think Emerson should make it kind of mandatory saying that way we can get back to some sort of normalcy in school, because I think that had a great effect on a lot of people’s first year at college and their mental health and how they found friends.”

Strickland said he thinks Emerson should require the vaccine in order to provide “extra peace of mind” for the community.

“I don’t see any reason why they wouldn’t mandate it to be honest,” Strickland said. “I honestly didn’t expect it to be this easy to get it … and honestly, with the Emerson student body, I think people will gladly go get vaccinated beforehand.”