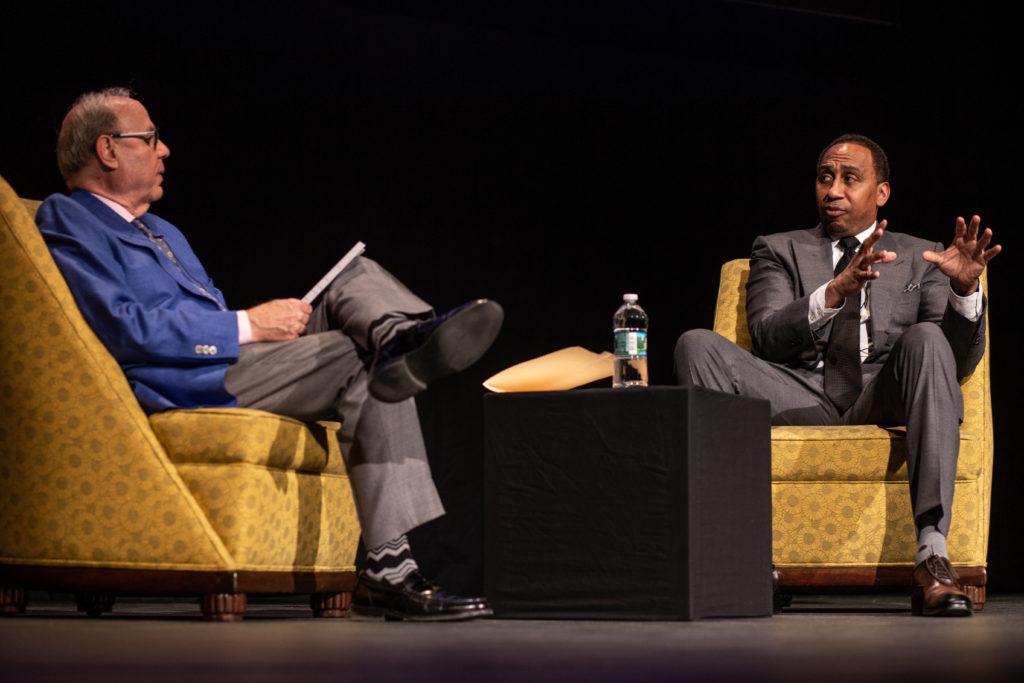 Stephen A. Smith shared details from his illustrious career in sports television on March 27 to what Al Jaffe called the largest audience to attend the Al Jaffe Speaker Series in his four years as the host.

Smith, an ESPN commentator and NBA analyst best known for his TV talk show First Take, drew over 500 people to the Paramount Center to discuss his early life and career before giving advice to students on how to succeed as a sports media figure.

Al Jaffe ‘68, the moderator of the event, served as ESPN’s vice president of talent from 1996 until his retirement in 2015. While at ESPN, Jaffe played a role in hiring Smith, which he described as a simple decision based on Smith’s impressive audition. He is also the co-vice chair of Emerson’s Board of Trustees.

“In my wildest dreams, did I ever think that I would be at an Emerson Speaker Series named for myself, bringing in one of the top sports pundits in the country?” Jaffe said during the panel. “I never thought that would happen.”

During his speech, Smith spoke about his childhood and how he learned about diligence at a young age. Raised in Queens, New York, Smith shared how his undiagnosed dyslexia challenged him as early as the fourth grade when he had a first-grade reading level.

“The reason I go back that far is because I remember getting left back [in school], and the entire block laughing at me,” Smith said during the panel. “It’s over 40 years later, and I remember it to this very day. All I cared about was that nobody would ever be able to laugh at me again.”

Smith’s mother urged him to attend college, but Smith said he preferred not to and instead went to technical school and studied electrical installation. He said he only sought out college after an advisor doubted his ability to get accepted.

“She laughed at me, literally laughed at me like I wasn’t smart enough to go to college,” Smith said. “Big mistake.”

Smith went from being laughed at to playing basketball and graduating from Winston-Salem State University in Winston-Salem, North Carolina. By the time Smith earned a role as a sports columnist for the Philadelphia Inquirer, he said he became one of 20 African-American columnists in the country’s history.

“No one can go up against me and defeat me if all you’re doing this for is to get the money,” Smith said. “I always knew I had a mission, and that’s where my confidence came from, and I haven’t been stopped, and I don’t plan on being stopped.”

“I love watching First Take and I love how outspoken he is. I’m definitely a big Stephen A. Smith fan,” Batcheller said. “I was wondering if he would be like how he is on TV, and he definitely was.”

Although he is not a big fan of Smith because he said he sometimes does not agree with some of the sports analyst’s comments, freshman sports communication major Jared Merrifield said he still believed he could learn something from a professional sports personality.

“I came here because he’s an interesting speaker and I think I could learn a lot from him,” Merrifield said. “He said he had to work his way to have the right to an opinion, and I thought that was very true.”

For the last half hour of the event, Smith answered questions from students and members of the Emerson community. He advised students in pursuit of sports communications careers to be approachable and admit to mistakes.

“One of the keys to success in our business is being personable,” Smith said to the audience. “Personable enough to know that whether it’s your attributes, your flaws, you’re relatable to the common man and woman out there. No one is flawless. No one is perfect. Don’t act like you are, admit when you’re not.”