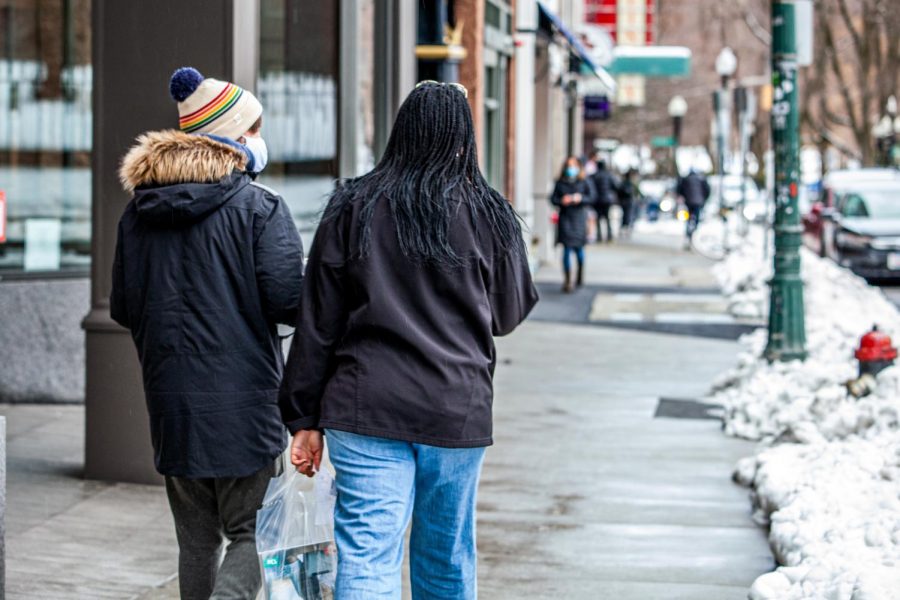 By Andrew Brinker and Diti Kohli

Top Emerson officials pinned the recent surge of positive COVID-19 tests on students’ lax behaviors Saturday, despite repeatedly touting the strength of the safety measures they have in place to keep the virus at bay.

In emails and interviews, administrators acknowledged for the first time that the virus is spreading between students due to repeated violations of social distancing and mask-wearing protocols. But officials’ faith in the college’s long-standing COVID-19 restrictions, which have only been narrowly tightened since statewide infection numbers rose and prominent virus variants emerged late last year, is unwavering. (Emerson’s fall positive tests came almost entirely from isolated instances of spread off campus, contact tracing efforts indicated.)

“This is serious, and there’s really no margin for error,” Vice President and Dean for Campus Life Jim Hoppe wrote in an email to students Saturday. “Higher positivity rates around the U.S., the influx of more contagious virus strains, and the cold weather heighten the need to observe safety guidelines. This is a reality, not a ‘what if.’”

The last two weeks’ spate of positive test results prompted two firm emails from the college, but no decision to bear down on existing guidelines like capacity limits or temporarily shift to online classes. (36 of the 55 positive tests reported by the college this semester have come in the last two weeks.) Instead, administrators doubled down on their assurance in the current protocols—and lambasted students for violating restrictions.

“If your lack of compliance is because you don’t want to follow the rules, then being in Flex classes this spring is not the right choice for you,” Hoppe wrote. “Let’s cut to the chase and make it easy for you to leave campus now before you spoil it for everyone else.”

It’s an abrupt shift from the optimistic community messages sent last fall and in the first weeks of the spring semester. When cases on campus spiked ahead of Thanksgiving, administrators praised students for adhering to protocols, though there were notable instances of students gathering on and off campus.

But as cases stack up, Muurisepp maintains the surge is an unavoidable consequence of the pandemic’s grip on the nation—“to be expected.” The COVID-19 positivity rate in Boston is far higher than it was in August, he said, and some students returning to Emerson from various states carried the illness back to campus unknowingly.

More than four dozen people have tested positive out of the 13,000 tests administered this semester, and the positivity rate sits at .42 percent. This semester’s total of positives is just five short of the cumulative total from the fall semester. Thirty-six students have entered quarantine or isolation since Thursday, Hoppe’s email said.

In an interview Saturday night, Muurisepp said “it is fair to think that we also have some post-baseline positives coming through.” That means, as Hoppe indicated in his email, that the virus is jumping from student to student—what public health experts call “community spread.”

Students who test positive report spending prolonged periods of time with more people than they did last semester, often up to six or more. “That’s too high,” Hoppe’s email read. Those close contacts are required to quarantine, causing the number of community members housed in quarantine spaces on campus—and presumably off campus—to balloon.

“Eating together, socializing, having folks over to your apartments, or working on projects together,” he said. “That is where we are seeing some concerning potential themes.”

Emerson’s plight is in line with other Massachusetts colleges, many of which have seen an uptick in cases after experiencing relative success containing COVID-19 last fall. The University of Massachusetts, Amherst banned gatherings and tightened restrictions after hundreds of undergraduate students tested positive. Stonehill College in Easton opted for remote learning until Feb. 14 after registering 36 new positive tests.

The trends directly contradict what one of the epidemiologists consulting with Emerson on safety measures told multiple Beacon reporters weeks ago. Dr. Jamie Lichtenstein, who teaches courses in biology at the college, was so confident in the protocols she said she would not be surprised to see zero cases of on-campus transmission in the spring.

“I think it’s very possible—likely—that we’re going to get through the spring semester with these layers of protection with zero on campus transmissions,” she said in an interview in mid-January.

Now instead of taking concrete action to curb the rise in cases, Muurisepp and other officials are focusing their efforts on messaging to students and “hoping it works.”

“All I think we can do, and hopefully, folks will listen and rise to the occasion, is that everyone just needs to adhere to the guidelines,” he said. “And if we could do it for a few weeks, we should be able to come out stronger on the other side.”

He said administrators have no plans to tighten restrictions based on current infection data. A more severe outbreak, like a cluster of 20 cases, would likely prompt stronger action, Muurisepp explained. In the fall, when Emerson racked up 12 positive tests in two days, officials quickly shut down all “non-academic in-person activities” and slashed space capacities until students returned home in late November. (Campus capacity limits have since been loosened.)

So administrators are charging ahead, vying for another semester in Emerson’s “bubble,” relatively untouched by the virus that is ravaging the world.

“It’s OK to be frustrated. It’s OK to be sad at the loss of things you miss. It’s not OK to let those feelings drive you to behaviors that could lead to community spread,” Hoppe wrote in his email.