Student-athlete in quarantine day four: the day I thought I lost my sense of smell 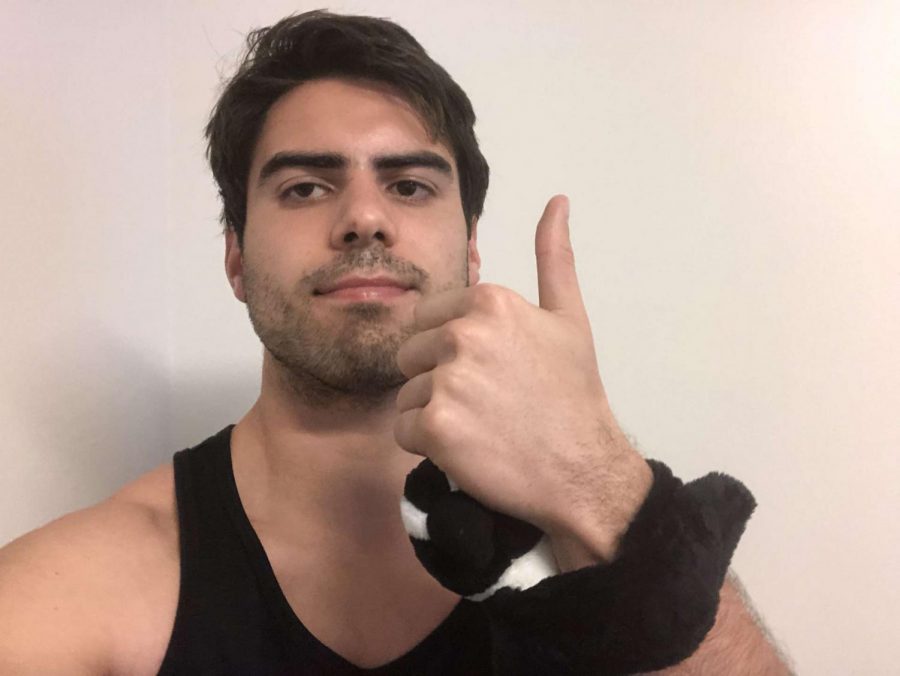 Ríos and his stuffed penguin Melvin in quarantine.

Tuesday was day four of my isolation, or, as I like to call it, just a full week before I am scheduled to leave Paramount.

I was sent to Paramount for isolation on Saturday after testing positive. Emerson broke the news to me in an email after their calls failed to reach me because of my foreign phone number. Not really the news you want to wake up to, but I was quick to pack my bags and contact my friends and family with the news.

This serves as a reminder to everyone that has checked in on me, and also the contact tracers, that I am feeling okay and that my temperature is normal and stable. This also is the first day I attended an online class, which forced me to wake up early for the first time since I arrived at Paramount on Saturday. Before anyone asks, early for me is 11 a.m., and by waking up later, it’s less time I have to be conscious throughout the day in isolation.

Over the past few days I had a minor sore throat and mild muscle aches in my legs and arms. Even though my COVID-19 symptoms aren’t getting worse, I still have to deal with a small amount of fatigue throughout the day, forcing me to constantly lay down instead of pacing around my standalone double.

On top of that, my final practices on the men’s soccer team and senior night were canceled by the college due to a rise in positive COVID-19 tests on campus. That was not the news you want to hear when you are locked in your room 24/7, but I have tried to find the positives in the experience.

Senior night is definitely my biggest loss this semester. Sure, the loss of my last few sessions on the field with the team after four years is gut-wrenching, but this semester has been start-stop since the beginning, so that kind of became the norm. Still, the loss of one last chance to step onto Rotch in an official practice, to bid farewell to the team and to all the memories I made over these years, is a hard pill to swallow.

Regardless, the past year taught me to adapt and to consider how I can still be there for the team, even if it’s not on the field. As hard as it is to lose those moments in goal, I know that years from now, I won’t be focused on the four or six hours I missed of practice; I will focus on the success I had on the team.

Little by little, I have been trying to stay active with the aforementioned pacing, stretching routines, or just some light bodyweight exercises like squats. Anyone who knows me at all knows that I spend a good amount of my day either in the gym or staying active—needless to say, that has been a big part of my life since I arrived at Emerson as a student-athlete. Even when I first got the positive test result, my plan was to stay in shape and do little workouts every day; what I did not expect was fatigue.

The body fatigue has been frustrating. Even if I stretch or do squats, I can only do it for so long before I have to take breaks. For someone who was working out multiple times a day previously, to be exhausted after 10 reps is a fall from grace. Regardless, the mindset has changed to resting and finding the little ways I can mentally push myself while still working to full recovery from the virus. I have focused on staying active but also resting my body.

There were two big events today that made day four of isolation a bit more entertaining than most. First was the return of the UEFA Champions League and the chance to watch some competitive soccer. I was finally able to focus my undivided attention on a game, and while it wasn’t the best game, watching Liverpool FC lose will always bring me joy.

The second event of the day was when I thought I lost my sense of smell. I decided to smell my new hand soap, which is essentially unscented. Afterwards, three minutes of panic ensued in which I attempted to smell all the items I have in my room, leading me to almost inhale high volumes of Hungarian smoked paprika, which I was able to smell.

Despite this and the other symptoms and news of loss of my final practice sessions, I am currently doing fine and looking forward to finally getting back on the field—and outside of Paramount.