Student-athlete’s final days in quarantine: 0/10 would not do it again 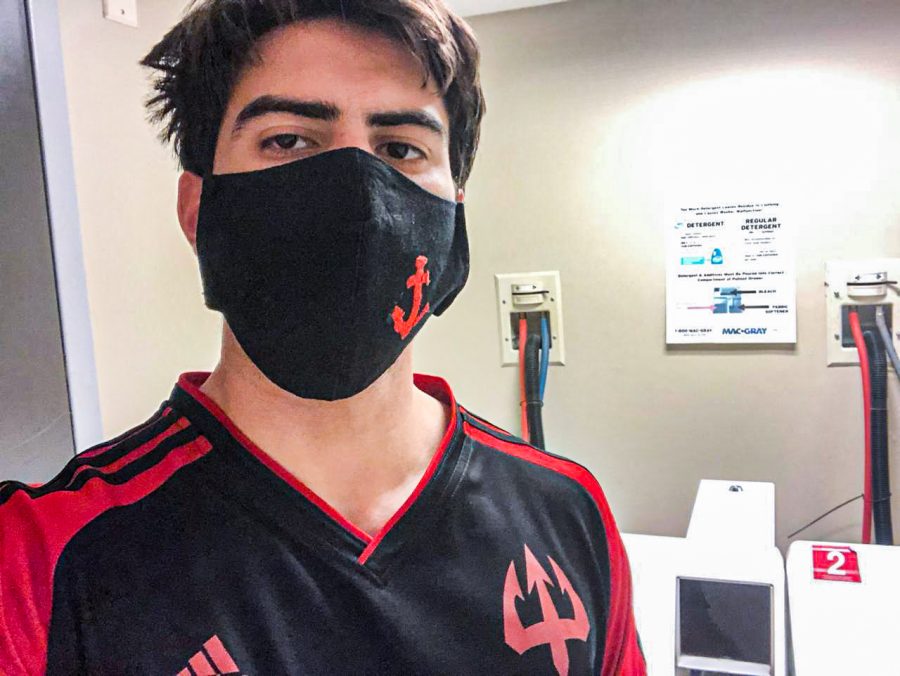 Ríos was given permission to leave his suite to do laundry during quarantine.

People tend to complain about how fast the weekend goes by, but believe me, my weekend has gone by slower than expected.

I am not exaggerating when I say that the last time I spent this much time in my bed during the weekend, was following my wisdom teeth removal in 2019, although that was a more painful experience.

After waking up around noon, I got up to continue with some stretches and a quick resistance band workout. I know that sounds like a line some fitness or lifestyle influencers preach, but realistically it took like 15 minutes and lacked any form of intensity.

After getting a text from my friend to hop on my PlayStation to play FIFA with him, I obliged. For those of you who don’t know what that is, it’s a soccer video game, and we played three games together. The scores were something to be proud, as we swept our opponents 10-2, 7-2, and 6-2. I felt accomplished enough after averaging four goals per game, and I returned to doing nothing of importance for the remainder of the afternoon.

After watching more movies, to the point that I found myself questioning how I had not lost my mind already, I hopped on Zoom to record another episode of “The Golden Boot Podcast.” I don’t want to spoil the episode, but it included a nice debate regarding who our best Under-23 players are in the world—obviously I made both lists.

The rest of the night included activities such as watching the full Avicii tribute concert on YouTube in all of its glory, playing “The Lorax” soundtrack on repeat, and practicing the dance moves to Vegedream’s “Ramenez la coupe à la maison.”

I woke up early on Sunday for some reason, and I was able to leave my room to go do laundry. Yes, I understand it’s not the most exciting thing, but any kind of adventure is welcomed after being in the same room for more than a week.

On Sunday night, I was also able to connect with a friend from back home. Unsurprisingly, we also played FIFA, in which I proceeded to beat him in three out of four games. I capped off the night by watching the greatest sports movie ever, “Goal!: The Dream Begins,” as well as “Spy Kids.”

Monday, again, was a very late start. Sure, later in the day there were meetings to attend, French homework to do, and this entry to write, but the day was slow as I prepared to pack my things and get ready to leave as soon as I was given the green light to leave Tuesday morning.

It has been a while since I was outside. It is one of those things where you don’t really grasp how long it has been since you arrived. It all feels so repetitive, so devoid of excitement, and a bit like life in a sense, it’s just monotone same things over and over.

Additionally there is the concern of food. I will say this has been the best meal service that I have ever had when I’ve done quarantine in Emerson. The first days of both this and last semester have been a let down to put it lightly. The food itself was not horrible in my case, it was DH food and that’s all I can ask for. Still food for me is something tough to deal with, I have dealt with eating anxiety for much of my life and as an athlete I always try to control myself and stay healthy which is hard when I can not cook my own meals and was even harder when I was in very little control of my meals. Still I will applaud the effort put into getting me my meals as close to perfect as possible.

The conditions can’t be described as subpar, as Paramount is a residential building, afterall. Still, it obviously would be more comforting and less of a strain on my mental health if I could do this in my own suite and room, especially when all of my suitemates are completing quarantine too.

I also find that Emerson’s focus on what they say is ‘protecting anonymity,’ comes a lot from how the school and its culture has reacted to the virus. As someone who lived in the hotspot of the 2009 Swine Flu pandemic, I understand the fear and worries behind another pandemic. But I think we just need to stay calm and understand that if you are to get COVID, we are lucky there is a system in place to support you at this school.

Regardless, there are some positives. I don’t have to get tested again this semester, and I have antibodies for the next 90 days. The cons are everything else that has happened in the past 10 days and the fact that I will now have to wait to get vaccinated, and if I end up traveling back home to Mexico my vaccination date could have to wait quite some time. So if I were to rate this experience, I would rate 0/10 not do it again.