Student-athletes reflect on a year without Emerson sports 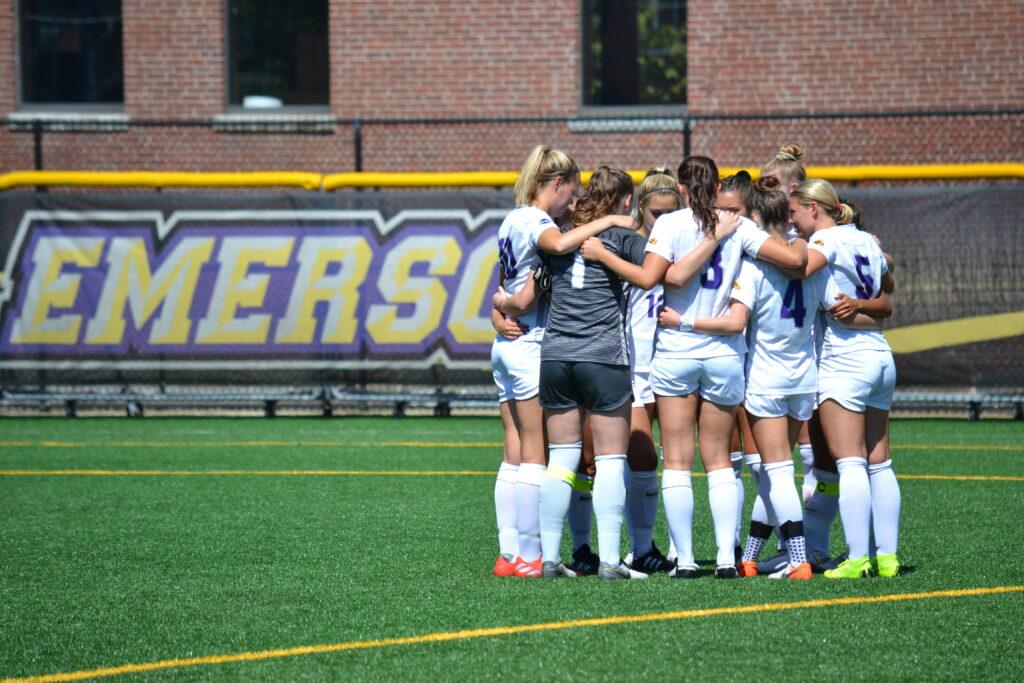 The women's soccer team was one of the 14 Emerson sports teams whose season was canceled due to the pandemic.

After returning to Boston from a preseason tournament in Arizona over spring break with the softball team last March, Sophia Cloonan eagerly awaited the beginning of her first season as an Emerson student-athlete—just days away.

“Then, like, someone flipped the switch and was like, ‘You can’t do this. You guys have to all go home,’” Cloonan said in an interview.

The onset of the COVID-19 pandemic forced the New England Women’s and Men’s Athletic Conference to cancel the spring sports season on March 12, 2020, and a day later forced Emerson to send its students home for the remainder of the spring semester. Over a year later, sports have yet to officially make their return to Emerson.

Student-athletes were left in limbo for over a year, unsure whether their respective teams would be participating in potential 2020-21 fall, winter, and spring sports seasons.

Jenna Van Pelt, a junior forward on the women’s soccer team, said she had mixed feelings about her spring practices being canceled and the college sending students home.

“It was sort of nice to have a break for two seconds, knowing that I wasn’t going to be required to get up at seven in the morning [for practices],” Van Pelt said in an interview. “In some ways I was relieved, but in many other ways hectically confused.”

The confusion carried into the summer and fall semester for student-athletes like Cloonan, who said the softball team wanted nothing more than to know the fate of their season.

Emerson athletes found different ways to stay active amid the absence of competition. Cloonan said she took up kickboxing to fill the void, and Van Pelt created a virtual tag game to keep the women’s soccer team in contact.

“If you catch someone on the street that’s on the soccer team and if you’re it for that week, you Snapchatted them a picture in the whole big group chat,” Van Pelt said. “It was a way to keep people still in check with each other, even though it wasn’t passing a ball.”

For other Lions like Phillipe Legagneur, a senior on the men’s cross-country team, it was difficult to cope with life without sports.

“Sports are kind of my only avenue of going outside, rest, and relaxation, and I really don’t have that,” Legagneur said in a phone interview. “I’ve been kind of playing video games like League of Legends and stuff like that.”

Van Pelt said she was optimistic during the summer about the potential of having a fall season, but said it was hard to stay motivated while training.

“[Our coaches] still expected us to go out on these runs and do these beep tests, so they knew that we were still going to have something to run for,” Van Pelt said. “Not being sure about a season made it really hard to do anything that really would motivate you to do those running and during summertime on lockdown.”

Just as the pandemic canceled sports seasons for first-year student-athletes, it also brought an end to the athletic careers of seniors on Emerson sports teams.

The fall sports season would have been Legagneur’s final season on the cross country team. When he heard the news that Emerson canceled the season in July, Legagneur said he understood the decision but was saddened his career would be ending so soon.

“Cross-country is really one of those sports where you just can’t have it going on during a pandemic,” Legagneur said. “A bunch of people running through five miles, breathing heavily, and in large packs, it just doesn’t sound like it fits right now. Especially after realizing what was happening, I was just like, ‘Well, this is just the way things have to be for everyone’s safety, but it also sucks that it needs to be this way.’”

Legagneaur said running with the men’s cross-country team was the most enjoyable time in his athletic career, and he hopes that the team continues to build on the foundation that he and his teammates set over his four years as a Lion.

“The Emerson cross-country team was the most fun I’ve had in any sport that I’ve played, and I’ve given 100 percent of my best,” Legagneur said. “The people that I ran with, we were running on the team since freshman year, and we’ve been trying to pick up the team to bring it back to a point where it was really good. But we’ve been getting less and less people to join, so I’m just hoping that that changes.”

The NEWMAC canceled the winter sports season on Nov. 2, leaving the men’s and women’s basketball teams without a season. The men’s volleyball team, which competes in the Great Northeast Athletic Conference, did not have a season either.

Aware of the fates of the fall and winter seasons and the number of positive COVID-19 tests on campus, Cloonan said she was “wholeheartedly not confident” the spring sports season would take place.

To her surprise, the NEWMAC announced its plan to hold the spring sports season on March 1, and Emerson decided  to opt in two days later. Cloonan said she’s excited for her first official season on the team.

“I’m pumped for the season; this is going to be a great one,” Cloonan said. “The team is looking pretty awesome considering the circumstances of not playing for a whole year, and it seems like it’s going to be a pretty epic season.”

She also said losing last spring season due to the pandemic has left her “in a learning stage” as she prepares to begin for her first collegiate softball season as a sophomore.

“It’s kind of strange because it feels like I’m just starting out now,” Cloonan said. “I still have to prove myself to be on the field and play with the rest of the team at their level. It’s definitely interesting playing now and getting a feel for how everybody else plays, the dynamic of the field, and just how a game would flow.”

Looking ahead to the future, Van Pelt said she’s confident the college and conference will allow her to play in her senior soccer season in the 2021-22 fall sports season.

“Senior season would be an awful thing to not have just because that’s the whole reason we all kind of did it,” Van Pelt said. “I hate it for the seniors this year, but I’m pretty optimistic about ours.”