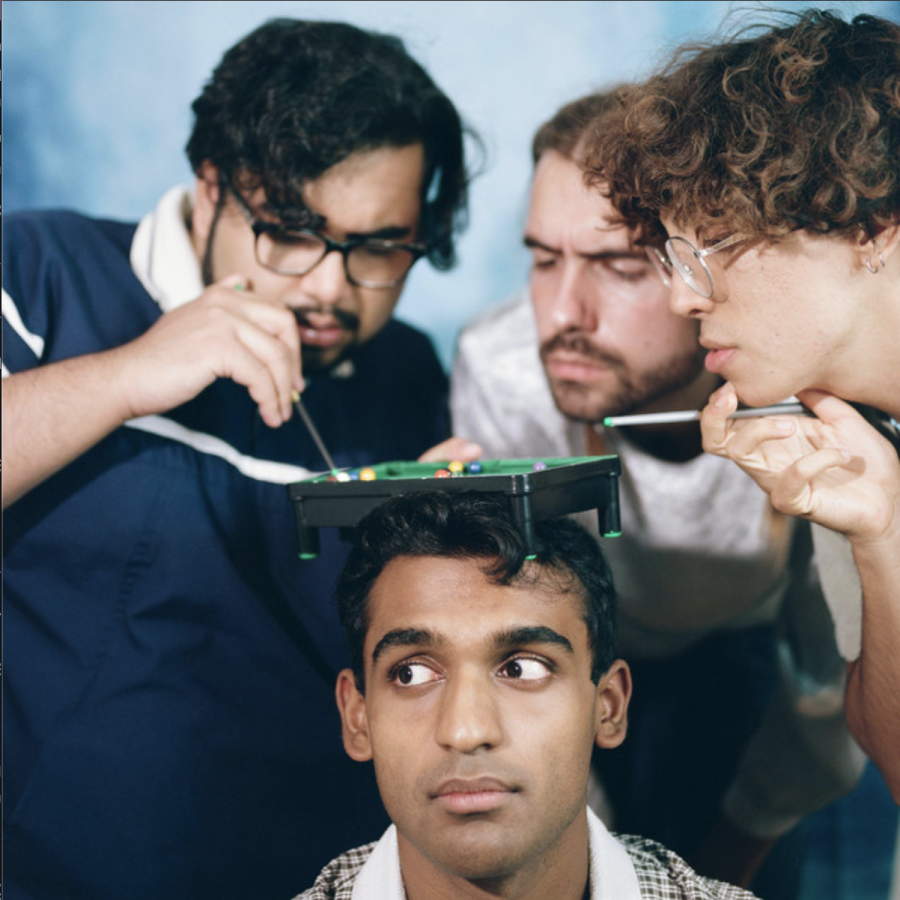 Sunsetta is made up of four students with a passion for indie rock. Before the release of their newest EP, they released four singles, one of which—“Waste of Time”— was included in “Green Line to Harvard Ave.”

The EP is short and spicy with five songs that last just around 15 minutes. It evokes a mix of melancholy and “I’m a badass” emotions as well as makes you want to dance. I highly recommend that any Emerson student give it a listen.

The first song, “Just Say Goodbye,” begins with a “let’s try that again” and then a whispered “one, two, three, go,” leading into a simple acoustic guitar and soft singing, giving the audience a feel of what the song’s about. The music quickly picks up in this classic “love hurts” vibe that makes you want to bob your head and play the guitar along with them.

The catchy lyrics paired with tambourine, percussion and guitar made me want to get up and start dancing around my dorm. The beat picks up and slows down smoothly, keeping you on your toes. I loved the conversation behind the instruments near the end and even listened really closely to understand what they were saying (although I couldn’t quite make it out). Sunsetta successfully created another sing-along banger, perfect for windows down driving around the city or your hometown.

I added “Waste of Time” to my music library within the first 30 seconds of listening. It holds a soft melody to start, but quickly picks up into a “sway your body” type of song. The guitar at the beginning evoked a certain emotion within me, where I instantly knew this song would strike a chord in my heart—no pun intended. The lyrics of the song were very relatable and most likely will be for anybody who has let someone repeatedly walk over them because of incomprehensible feelings. Like when he says, “I let you hurt me over and over just to be with you one day.” Yet another sing-along I am eternally grateful for.

“Nasty” creates a completely different mood compared to the first two songs. Sunsetta goes from “I’m sad; I miss you” to “fuck you” real quick with this entry. The chorus lyric, “yeah it’s not my fucking fault that you nasty,” is a straight mood and definitely appreciated. I listened to “Nasty” right after “Waste of Time” and genuinely said “yes Sunsetta, you’re right; he is nasty; thank you.” And then there was a guitar solo, so I did indeed stand up and start acting as if I was playing the guitar. The way the instruments blend together with the vocals gave me goosebumps throughout the entire EP. And yeah, you guessed it—“Nasty” would be classified as another “roll the windows down and go crazy” sing-along.

“Diss Your Fear” brought out emotions in me I didn’t even know existed. I was jumping up and down in my room playing air guitar with zero shame. The song is a drastic change from the others with its lean towards rock, as compared to the indie rock vibe of earlier tracks. The heavy guitar and drums make the song more demanding than a simple swaying. More like you could break your neck from the aggressive head-bobbing rather than the more gentle swaying of “Just Say Goodbye.” The guitar solo made me envy their immense talent, due to my lack of musical ability.

“Size Me Up” begins with a unique instrumental that starts slow and then speeds up, but doesn’t get too loud. The guitar abruptly stops, and the singing begins. And then there it is—the blend of guitar and drums that go crazy. This song specifically kept me on my toes as it ranged from slow to fast and slow again. And, you guessed it, I did play air guitar AND air drums while listening to this one which definitely challenged my coordination skills. The vocals and instruments together had a great build up of sound, and then the song abruptly ended. There was music, and then there wasn’t, which I loved. Sunsetta showed who was in control with that move. ‘

“Green Line to Harvard Ave” made me switch emotions about a million times within the span of 15 minutes, which is powerful to say the least. Sunsetta, I am patiently waiting for more music. From one music-loving Emersonian to another, thank you.