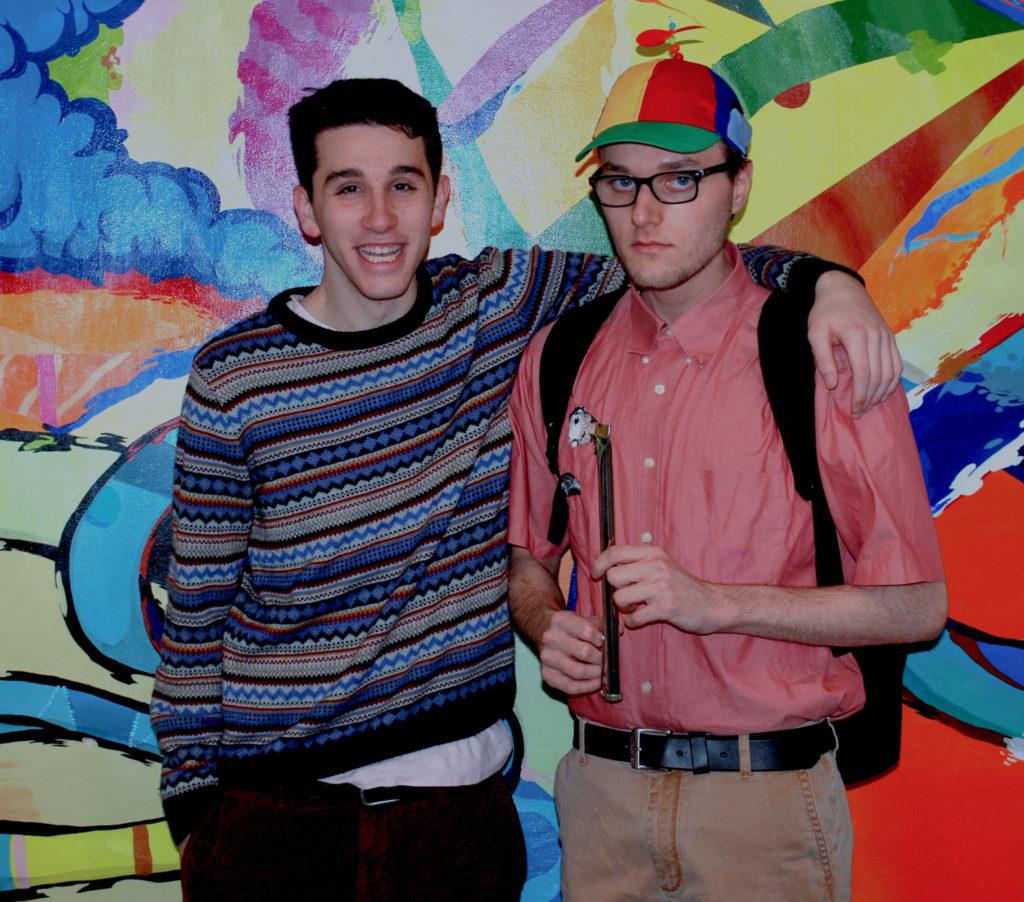 During the first week of last semester, junior Benjamin Zieper and sophomore David Potashnik crammed student comedians into a small dorm room to practice their routines on an audience of peers. After hosting a few dorm shows, the two decided to move the location to a bar in downtown Boston.

Comedic arts majors Zieper and Potashnik are the hosts of The Big Ugly Show presented by a student comedy group the two belong to, Writers of the Dorm. The show is hosted once a month at Democracy Brewing, a bar in Downtown Crossing, and features student comedians from Emerson along with local comedians. The show is open to people of all ages.

Zieper and Potashnik pay every comedian performing a set, whether professional or not, from the $3 admission fee for the show, according to Zieper. Any leftover money goes towards funding Big Ugly Shows in the future.

After a few good turnouts for the show at Zieper’s dorm room last semester, Zieper and sophomore Aaron Axelrod, a producer for The Big Ugly Show, started looking for venues outside of Emerson to take the live show to.

Once Democracy Brewing offered the group their venue, The Big Ugly Show started performing there monthly, in addition to holding the monthly dorm shows. The venue fits a maximum of 50 people, according to the bar’s website, and audience members fill the room at most of their shows, according to Zieper and Potashnik.

Zieper said one of the main goals of The Big Ugly Show is to give student comedians a chance to perform stand-up outside of troupes recognized by the Student Government Association.

“Troupes at Emerson are very exclusive, you have to audition to be accepted into their community. With The Big Ugly Show, it’s just us finding hard-working comedians and giving them time to perform,” Zieper said, “We try to show people there are different ways to find the success you want.”

Writers of the Dorm is not recognized by the SGA, and purposefully so. According to Zieper, the group feels the guidelines for SGA-recognized organizations go against the group’s belief that students don’t need to practice comedy in a traditional way.

“To get recognized by the college, there are standard guidelines you have to abide by. One of the whole reasons Writers of the Dorm was created was because we were trying to show people they don’t need to follow the norm,” Zieper said, “We find that people really gravitate towards that.”

In addition, when student organizations become recognized by SGA, they sign the rights of the club over to the college. Potashnik said the group hopes to expand past the college in the future, which requires Writers of the Dorm to remain separated from Emerson.

Instead of the traditional process of holding auditions to find comedians, Zieper and Potashnik find eight performers for The Big Ugly Show through their friendships with comedians at the college and around Boston. The headliners for the show are allotted 10-15 minutes for their sets, while the other acts get five to seven minutes. The Big Ugly Show also hires at least one professional comedian for each show, like Anjan Biswas who performed a set at their most recent show on December 3, 2018 at Democracy Brewing.

Senior Jacob Feldman, the president of the SGA-recognized stand-up show Inside Joke, also performed a set at The Big Ugly Show on December 3. He said The Big Ugly Show offers students a unique opportunity to learn more about stand-up by working with more experienced comedians.

“It was really cool for the Emerson kids who went because they had a bunch of non-Emerson comics, which is fantastic,” Feldman said.

Feldman said he admires Zieper and Potashnik’s commitment to paying every comedian in their show.

“They pay their comics, which they don’t need to do. That’s just them being nice. There’s absolutely people who would do it for no pay at all,” Feldman said. “This is the type of thing Emerson kids should really want to support.”

According to Potashnik, The Big Ugly Show tries to feature a large variety of different comedic styles at their shows to keep their audience of mostly college students interested in the sets. Potashnik said in the future they hope to attract audiences outside of the usual Emerson crowd.

“We’re trying to expand our audience within the Emerson community to appeal to all majors, not just the comedy and film majors. We want to reach out to everybody,” Potashnik said, “After that is when we want to start focusing on how to get the general public to come to our shows.”

Zieper and Potashnik said they hope The Big Ugly Show will help improve the reputation of Emerson comedians in the Boston comedy community over time.

“It’s a show that successfully combines the Emerson College comedy scene with the Boston professional comedy scene. It really does help our case as Emerson students in the comedy scene by showing we’re ambitious, hard-working and good writers and performers,” Potashnik said.