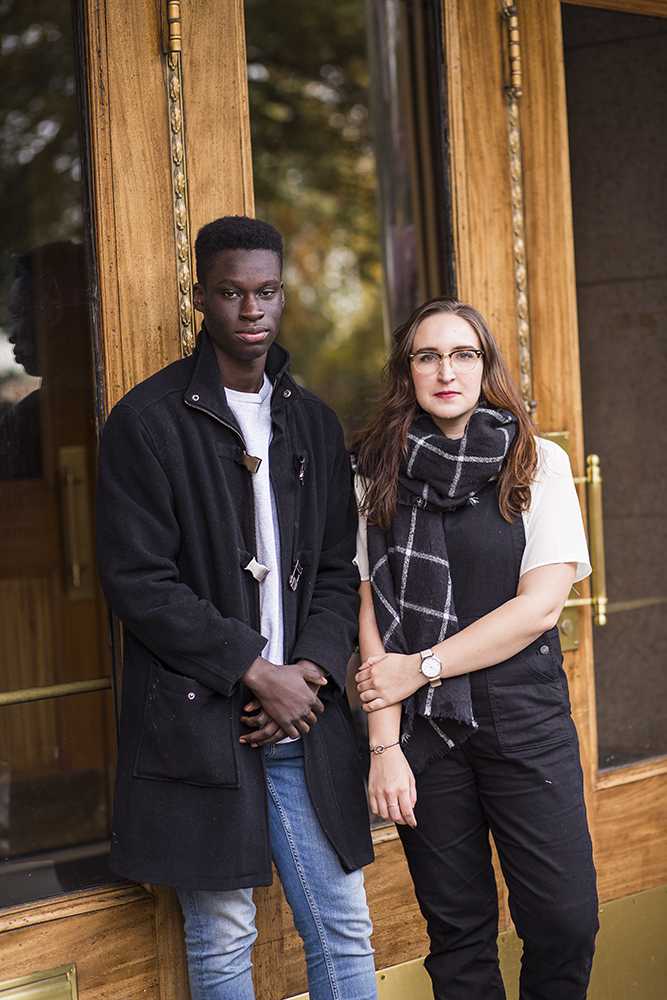 Maps show where we are, direct where to go, and reveal an illustration of the world we live in. Through fashion photography, an Emerson duo is constructing what they call a “visual map” of their two beloved cities, Boston and New York City.

Last summer, Sophie Peters-Wilson and Ebrima Manjang, both sophomore visual and media arts majors, created a fashion photo blog called Peters Manjang Wilson. Each post highlights a different neighborhood or locale, and the models’ outfits reflect the nature of their particular surroundings. Initially, the two New York City natives focused on areas in their hometown, like Williamsburg, the Meatpacking District, and Central Park.

“We want to show the diversity of New York City and to channel the energy of the city through the photos,” Peters-Wilson said.

Manjang said that the blog is not just about photography but also about personal connections.

“[Peters Manjang Wilson] is about who we are,” Manjang said. “I believe our experiences on a shoot and how we see the personality of a model is what transcends the photos.”

The duo met during a photoshoot for Emerson’s Next Top Model last spring when Peters-Wilson was assigned to style Manjang. When the two returned to Emerson in the fall, they shifted to creating a visual map of Boston. As transfer students, they said their college home does not resonate with them as well as New York City does.

“There’s just so much [more] kinetic energy [in New York City],” Peters-Wilson said. “We both miss the fast-paced environment of Manhattan.”

The blog came to life when the duo uploaded portraits of Peters-Wilson’s friend Tia Kumar in the Metropolitan Museum of Art. Peters-Wilson said she and Manjang spontaneously met up in New York City for the first time this past summer and decided to finally make their blog a reality.

“I was really nervous about the photoshoot because I’ve never done something like that before,” Kumar said. “Something about their energy and the way they work with one another just made me feel really comfortable, even when the shoot is in a public space.”

Peters-Wilson said both she and Manjang try hard to shift away from the classic fashion and photo style, which focuses more on the clothing than the overall design aesthetic, toward an edgier, art-oriented theme.

“While some of the outfits that we put together are really simple, I want to start making images and putting together outfits that are pushing the limit,” Peters-Wilson said.

Manjang said that his style is bold, and Peters-Wilson said she takes inspiration from the simplicity of Scandinavian culture, specifically Danish interior design. She said its minimalistic nature teaches her how to express her ideas without overcomplicating the details.

“When I style photoshoots, I always try to make them very simple while paying attention to detail,” Peters-Wilson said. “[Manjang] is the one that would lean towards more bold patterns and colors.”

Although the website is just starting out, both Peters-Wilson and Manjang said they already have big plans in store for the future. They said they would eventually like to do photoshoots all around the world and share their experiences on the blog.

The site currently has 23 posts, featuring places like the Institute of Contemporary Art in Boston and the High Line in New York City. Peters-Wilson and Manjang said they want to incorporate guest photographers and writers and that they want to propose the blog as an organization to the Student Government Association to get funding.

While they’re often busy modeling, styling, and photographing for orgs like em Magazine and Your Magazine, Peters-Wilson and Manjang said that every post is a collaborative effort. Manjang said that because of their contrasting tastes, they are able to learn a lot from one another.

“I’ve learned from her that small details matter,” Manjang said. “She understands me in ways a lot of people don’t and we just balance each other out.”

Peters-Wilson said besides teaching her more about photography, Manjang has also encouraged her to pursue the hobby, which has been overshadowed by her focus on studying film.

“Starting the blog with Ebrima made me realize that I don’t often give myself time to pursue other interests,” Peters-Wilson said. “I realized that I really love being on these shoots and being around these people.”