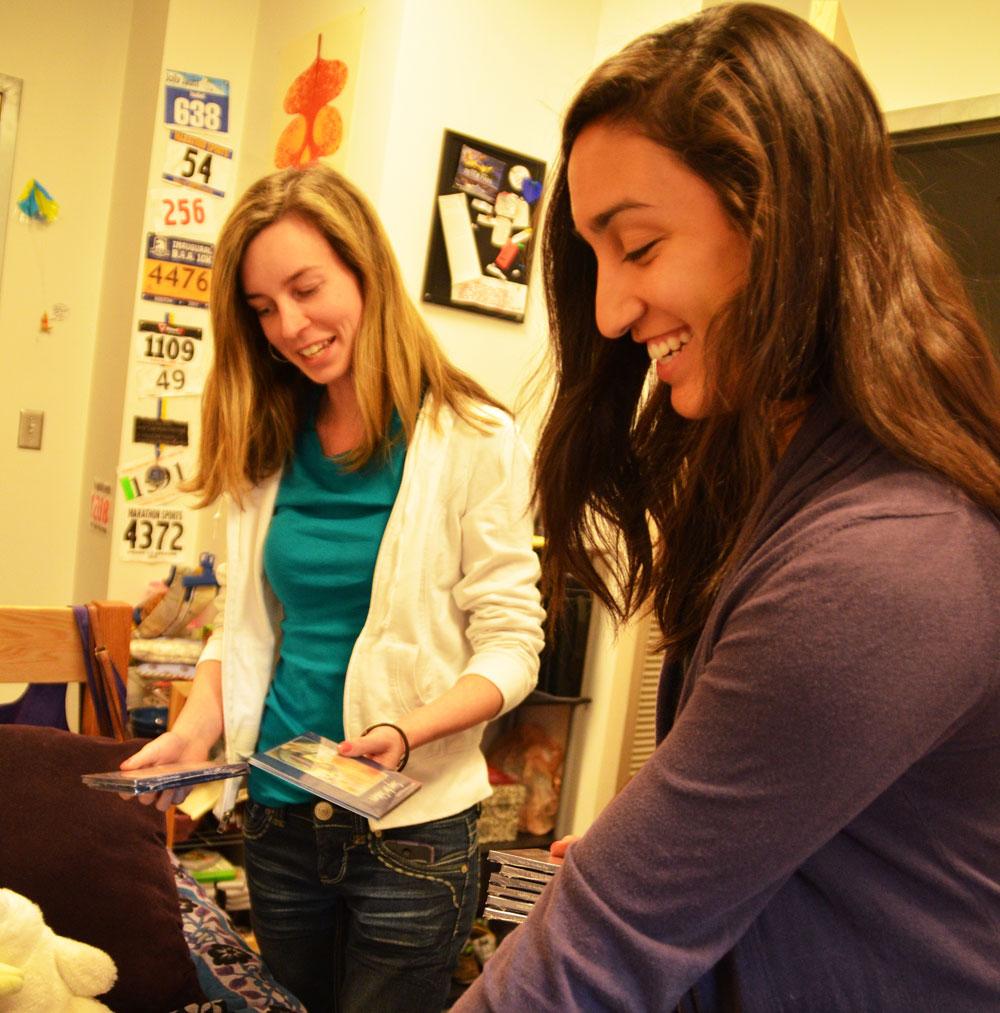 With three days to make money, junior Isabel Thottam partnered with senior Emily Smith for a project as part of the Emerson Experience in Entrepreneurship (E3) program they were enrolled in. The two visual and media arts majors and entrepreneurial studies minors scrambled to develop an idea, ultimately coming up with a concept that combined their love of music with philanthropy. Thus, Hold On Another Day was born.

Hold On Another Day is a for-profit organization put into motion through the E3 program for entrepreneurial studies minors. During this one-year program—which  consists of two classes each semester—students learn about topics such as communication, law, finance, leadership, management, marketing, and sales.

Similar to the TOMS one-for-one business model in which for every pair of shoes purchased the company promises to donate a pair of shoes to a child in need,  Hold On Another Day donates a mixed CD to a partner organization every time a copy is sold. The organization helps those in need through the power of music, said Thottam.

Their current product is a mixed CD titled, “Songs for Soldiers.” For this compilation, they partnered with Operation Gratitude, a non-profit organization that sends care packages to soldiers overseas. For every “Songs for Soldiers” disk sold, one will be donated and put into a gift basket for a soldier. President of Operation Gratitude Carolyn Blashek said she was extremely impressed by the ingenuity and enthusiasm of a college student creating this type of business model.

Currently, Hold On Another Day has sold over 50 copies of “Songs for Soldiers”. A physical copy of  the compillation can be ordered online at holdonanotherday.org for approximately 13 dollars as well as bought directly from Thottam. The album is also available for digital download for about 10 dollars.

“Music CDs provide comfort, an escape, and a connection to home,” said Blashek.

The CD is a 12-track compilation of inspirational and army themed songs donated by various local Boston artists as well as a few others such as veteran Joshua Morrison. With such songs like, “Home” by Morrison, “Alive Again” by Austin Veldman, and “Eyes on the Prize” by Julia Easterlin, Smith said they wanted to give soldiers hope while they were away from their homes and families.

“What’s kind of cool about it is it can also be for the families of soldiers or the friends,” said Smith, “Everyone kind of knows someone who serves.”

Though the organization became a reality this year, Thottam said the idea developed following her freshman year of college. When Thottam returned home she said she stumbled across an old Jonas Brothers playlist that she made while struggling with depression. As a familiar song titled “Love Is On Its Way” filled her ears,  Thottam said she especially connected with the lyrics, “So hold on another day, ‘cause love is on its way. You’ll find it’s gonna be okay.”

“I just happened to be a huge Jonas Brothers fan when I was in high school,” Thottam said, “And I used to make mixed CDs to translate what my mood was.”

These lyrics inspired the name of Thottam’s business and also inspired her to follow the TOMS business model, she said. Because Thottam suffered from depression in high school, her original idea, she said, was to give back to people who suffered just as she did and heal them with music.

While Hold On Another Day is solely Thottam’s organization, Smith acts a business partner, in addition to spearheading the idea for an album dedicated to aiding those serving overseas. Smith said she was scrolling through her iPod in search for music and came across a song by Morrison, who wrote songs while he was overseas for the army. When she told Thottam about the song and story, they both agreed they would make song compilations for troops.

Thottam said she is currently planning a launch party in the works to promote her new organization. The two business partners said they are planning to work with WERS 88.9 to put on a show with the artists, which she hopes to host in late June.

Hold On Another Day plans to create new CDs for cancer and suicide prevention for future projects said Thottam.

“It’s been great to have this experience,” said Thottam, “This is the first CD and now I see how it’s going to work and translate into the next CD.”

The next CD, “Songs for the Heart and Soul,” is going to be for Ellen’s Heart and Soul, a new non-profit that raises awareness for breast cancer. The organization collects used iPods from people in the Boston area and fills them with inspirational songs to give to patients undergoing treatment. For each CD sold by Hold On Another Day, one will be donated to someone going through breast cancer treatment in the Boston area.

“I’m planning to pursue [my business] currently and post graduation,” said Thottam. “I’m hoping that it’s going to take off.”