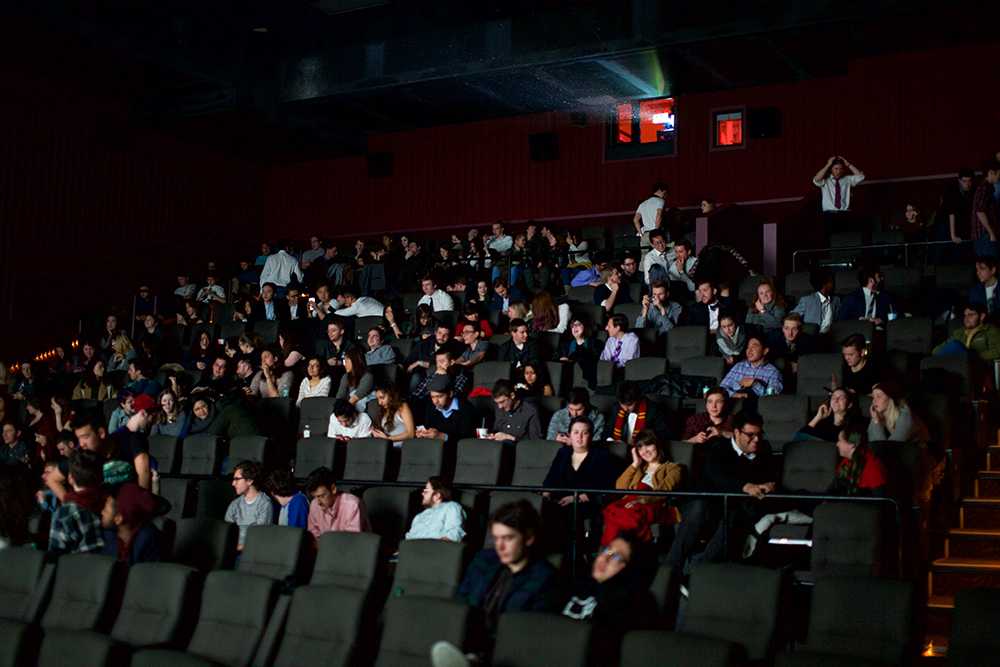 The 48 Hour Film Festival: where a loaf of bread, a parasite, and a materialistic antagonist can live together in creative harmony. It delves into the wild world of the weekend, a realm where Emerson students play in the city till Monday comes marching in. Only this time, their game is filmmaking—and the stakes have never been higher.

Last Friday, over 340 students in teams of three to seven embarked on a two day moviemaking mission. 50 short films, each around three minutes long, were submitted.

Jordan Gustafson, a sophomore visual and media arts major and resident assistant of the Film Immersion floor in Piano Row, coordinated the festival with the learning community. He also organized the festival last semester.

“We’ve been carrying the tradition forward from what we’ve done in the past but changing it to fit my vision, the Film Immersion floor’s vision, and what it needs to be in the future,” Gustafson said.

Gustafson streamlined the registration process and moved it online to accommodate the influx of contestants this year.

“I want to make it bigger and more enjoyable for everyone involved,” Gustafson said. “It’s a little cold outside right now, but I’m hoping the joy of filmmaking carries over and people really put their passion into the projects they’re making.”

Seth Grue, associate director of residence life, has seen the festival expand since he began working at Emerson in 2004. It evolved from an annual event called the Cornucopia of Creativity, which focused on the creation of a theatrical production.

“Because the participation has continued to grow each year, this semester we have rented a theater in the AMC Loews Boston Common for the large screening of all the films,” Grue said. “As organizers, we need to continue to be creative in the ways we can showcase the students’ amazing work.”

In previous years, teams were given a genre, a theme, a word, and 48 hours to create their masterpieces. Since then, Gustafson has added spice to the classic short film recipe with new genres, guidelines, and requirements.

“We are trying to pick things with a more wide range than just the basic drama or action type of thing,” Gustafson said. “Those genres are still great, and you can have elements of those genres in the genres we’ve picked.”

The selected ones varied from mockumentary to space opera to satire. Despite their diversity of genres, every film had a prop in common, a new requirement added this semester. For the spring festival, the required prop was bread, the required word was “parasitic,” and the general theme of the festival was materialism.

“The big focal point for the festival is for participants to take all of the pieces they are given and put them together to make a really successful short film,” Gustafson said.

“My group, among other groups, really went all out with it and made bread a huge component of our story,” Bridgman said. “For example, my group used exclusively baguette [puppets] in the making of our film.”

Bridgman said the guidelines helped his group to come up with original ideas.

“I think it’s less of a restriction and more a gauge to spur creativity,” Bridgman said. “If you tell someone to come up with a great idea, they might not be able to think of much of the bat. Give them a handful of restrictions and they’re going to force themselves to think creatively and use those restrictions to heighten their reach.”

“When you put a deadline on any form of art, it can be both a curse and a gift,” Nelson said. “I think having a deadline can definitely put a lot of pressure on the artists, which can create feuds but also bring out a lot of creativity.”

“It’s really insane to see what people can create in such a limited amount of time,” Gustafson said. “Just being there to see them all and watch is enjoyable for me because it shows what Emerson students are capable of doing in terms of creativity and filmmaking, which is what we’re all going to be doing down the line.”