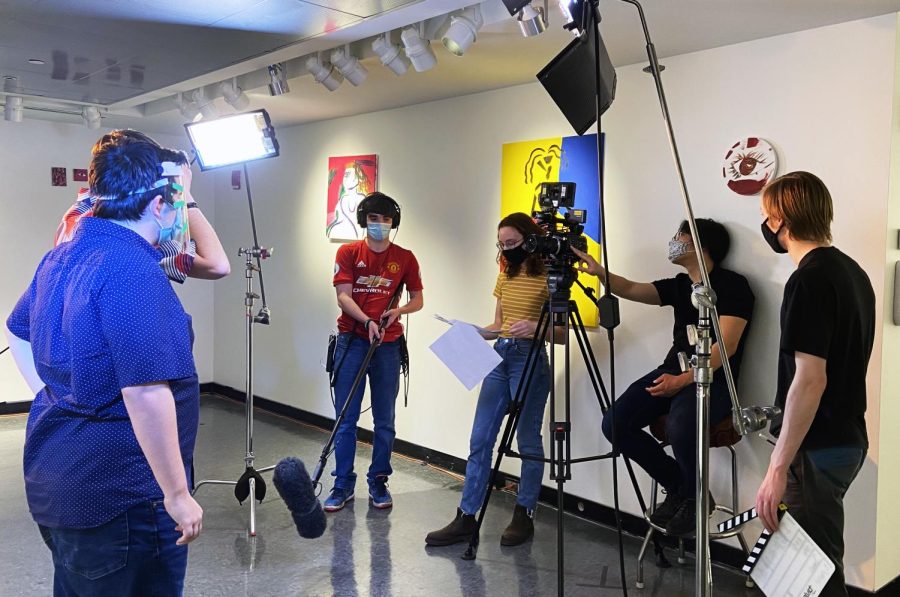 Emerson film students on set during the pandemic.

By Michael McHugh and Hayden Bandes

Last fall, Emerson warned of the limitations the COVID-19 pandemic would place on student film productions: “We’re not going to be able to shoot it, so don’t write it.” This year, though, student filmmakers are entering an atmosphere of excitement as productions ramp up—and of caution, as the pandemic still lingers.

With almost all community members fully vaccinated, Emerson student productions are beginning to resemble how they operated prior to the pandemic by relaxing mask mandates and social distancing protocols, allowing for a semblance of normalcy.

Nevertheless, several directives from the Visual and Media Arts Department remain in place, hoping to curb COVID transmission on-set until COVID-19 is a thing of the past. The directives, first implemented in the fall of 2020, have been substantially loosened for the 2021 academic year. While all greenlit films must have one crew member become a certified “COVID Captain” and receive appropriate training, 15 cast and crew members are now permitted on set at any given time—as opposed to eight last fall.

Other elements of the plan will be familiar to those who worked on films last year—namely the indoor mask requirement, three feet social distancing guideline, and sanitizing protocols. These protocols are largely supervised by Director of Production and Safety Leonard “Lenny” Manzo, who could not be reached for comment on this article.

Following a year of uncertainty surrounding productions, students have expressed a genuine excitement to get back on set. The loosened restrictions have not only made production schedules easier, but they have allowed for crew members to connect both on and off set.

“We can just hang out after production,” Wang said. “Normally, you’re like, ‘Alright! Mask on! Gotta go, bye!’”

“We did a whole year of regulation and harsh rules and trying to adapt to production with limitations indoors,” he said. “Now people are really excited that the limitations are kind of lifting a little bit. The general feeling onset—and just at the school in general—is excitement to get back in person and involved in productions.”

Some student filmmakers, such as sophomore visual and media arts major Calvino Phillips, feel that their experiences last year prepared them to work creatively around those restrictions still in place—and take advantage of those lowered ones.

“If there’s one good thing that came out of this former pandemic, it has helped people think outside the box,” Phillips said. “I remember having to shoot with masks and stuff. How do you work around that? That helped some people creatively.”

“You always work around it,” he said. “You’re aware that there are some things you just cannot do because of COVID and that’s why you don’t come to set unprepared. You always come with a backup plan, just to make sure, ‘Oh, if we actually cannot get this done because of COVID, let’s just do it another way.’”