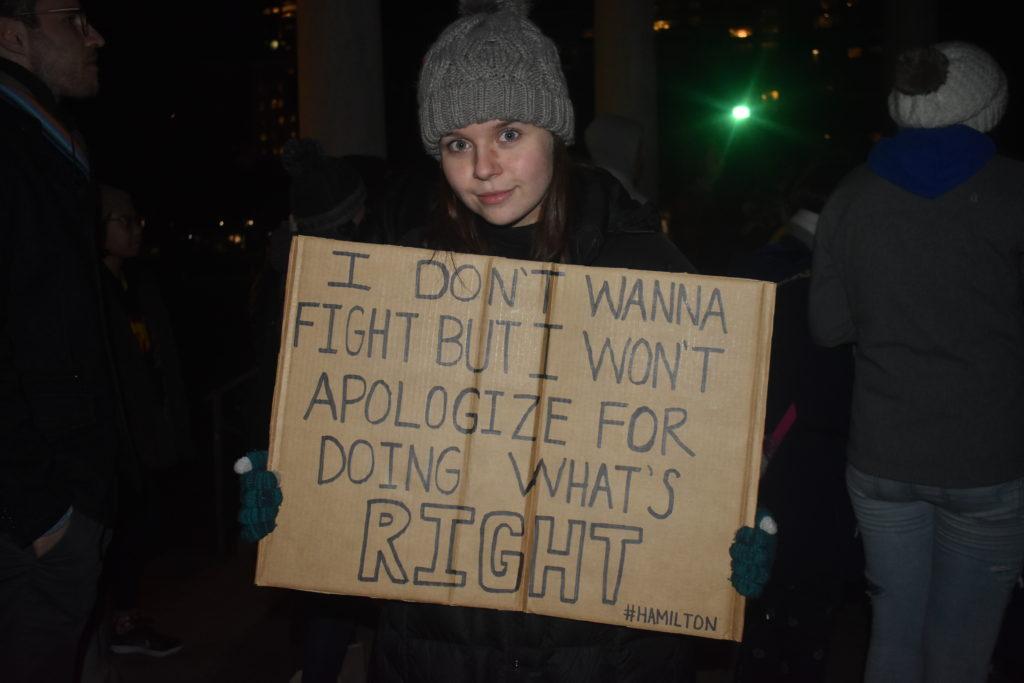 About 30 students gathered at the Parkman Bandstand to protest the Trump administration as part of the “Trump Doesn’t Represent Us Rally” organized by student group Time to Rise on Oct. 25.

According to founder, freshman Tayon Kulos Time to Rise is an organization of Emerson students attempting to foster a platform for political dialogue between college students. The late-afternoon protest served as a public launch for the group featuring speakers such as freshmen Logan Badalucco and Bella Townsend. The rally lasted about an hour and consisted of mostly freshmen attendees.

The recent Trump memo, which detailed an effort to narrowly define gender as a condition determined by the genitalia a person has at birth, angered Badalucco—a transgender male.

During the protest, Townsend read one of her poems concerning youth activism in front of the crowd with 30-degree wind running through the Bandstand.

“It’s not our job to fix things but when no one else will, it is our time to rise,” Townsend said.

After re-watching the second presidential debate between Hillary Clinton and Donald Trump, Kulos decided to start Time to Rise with freshman Kiran Mahboob. Kulos said he couldn’t let Trump get away with what he was saying and wanted to inform students of issues that would affect them long term.

Kulos said he tried to start Time to Rise under a different name, but it didn’t gain traction. Afterward, Kulos brought in Mahboob, who helped organize the women’s march in Pakistan. Together they founded Time to Rise and organized the Oct. 25 rally.

Time to Rise is not a strictly partisan organization, according to Kulos. Rather, Kulos said it is an opportunity for people with different viewpoints to understand the other side of issues.

Kulos said he plans to build upon the momentum from the protest by hosting debates, future protests, and other events.

“Hearing the other side is important…So I’m hoping to start a dialogue,” Kulos said in an interview.