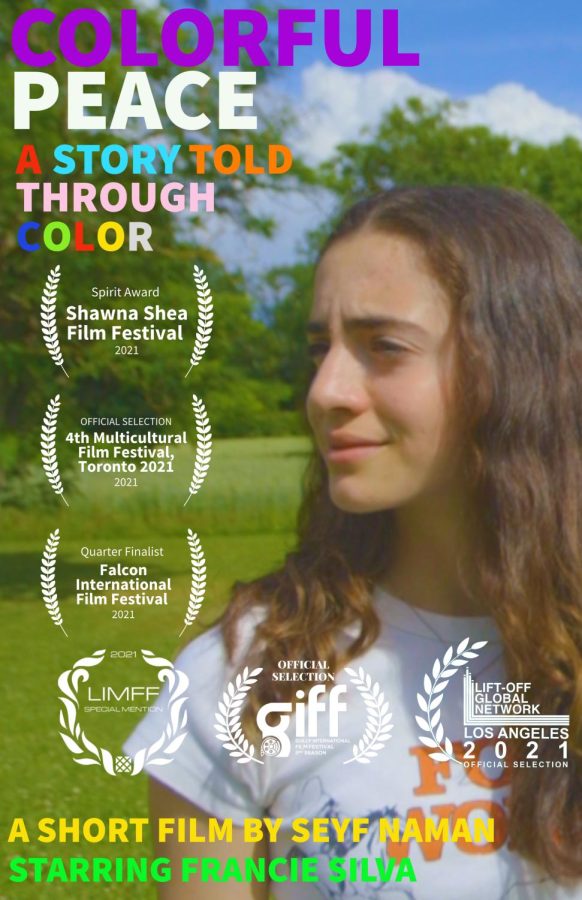 The flyer for 'Colorful Peace.'

The film sheds light on the reality of mental health struggles young adults face with an emphasis on the way colors can change storytelling, an idea inspired by the use of color in the films The Grand Budapest Hotel and Isn’t It Romantic.

“The ending to the films are always going to be the same: the guy gets the girl, the good guys win, the protagonists learn a key lesson in life,” Naman said. “We might not be able to change the way we end films, but we can change the way we tell them. I thought color would be a great way to do that.”

The film follows Ellie, a young woman who struggles to remain hopeful and happy amid feelings of loneliness and isolation. She strives to see the beauty in the places she goes and the people she meets, but her world remains black and white. It takes the presence of a colorful “spirit,” to reintroduce her to the bright, vibrant things in life that she had been missing all along.

“Colorful Peace” was inspired by Naman’s knowledge of a frame by frame animation editing technique which creates motion over film called rotoscoping. Once he decided he wanted to incorporate this tool, the characters of the short film seemed to create themselves.

“The idea was that there would be a girl and a spirit who would be created using the brush effect in after effects,” Naman said. “It’s a process called rotoscoping, something which isn’t very commonly used. When writing, I was thinking that this is what I wanted to do, so that’s what came around to creating the spirit.”

Though the spirit is a seemingly simple character, Naman was aware of the vigorous process it would take to create the spirit, due to the time consuming and extremely tedious nature of rotoscoping. Oftentimes, Naman would need to redo a single frame dozens of times in order to make sure the movement and color matched the one preceding it.

“The film was shot in the summer of 2021,” Naman said. “I always knew that I wanted this to be a one man crew and that it would be very simple to shoot. I decided I wanted to have an easy shooting process since the editing would be so difficult.”

With the help of actress Francie Silva, who played Ellie, Naman shot the film in his hometown of Geneva, Switzerland. He described it as a “quick and easy” shoot despite the challenges that arose in a film starring an animated character.

“One thing that was key in production was framing where the spirit was going to be and where Francie was looking,” Naman said. “We needed to create a focus of where the spirit would be, so we took a little vitamin box which helped with the focusing of the camera. This worked really well in post-production.”

Despite the complex and laborious editing process, both Naman and Silva are proud of the artwork they created.

“It was pretty amazing how everything was put together,” Silva said. “When I was doing the part, I only knew what I was filming, so I didn’t get to see the behind the scenes of it all. When I saw the whole project together with the animation of the spirit, it was quite amazing.”

In the film, the wavering presence of color contributes to the overall message and theme of the film, visually depicting Ellie’s struggles with mental and emotional health.

“I would say my character is someone that, at the beginning of the story, was very depressed and unhappy with life,” Silva said. “She’s very lonely and experiences a lot of thoughts about suicide and general unhappiness. Later on in the story, she finds the spirit that helps her see the better things in life.”

Throughout the film, Ellie struggles with thoughts of suicide and self-harm, subjects Naman said he took care to depict thoughtfully.

“I definitely think that showcasing mental health is very important in art,” Silva said. “A lot of people really notice and pay more attention to these issues that way. It’s a very important topic that the general public struggles with, and being able to show that through art and getting other people to connect with these feelings is a very important thing.”

Silva’s portrayal of Ellie taught her many important lessons about mental health and the need to destigmatize reaching out for help when experiencing struggles.

“The message of the film is to recognize that the glass is not half empty, but half full,” Silva said. “There’s always going to be negative things in life, but there’s also always a positive side. If you’re struggling with mental health issues, getting help is a very important thing. The overall message is to never give up your hopes, and keep your head up always.”

Naman’s hope for the film is that the audience will be able to reflect on the same message that Ellie did—there will always be days that seem devoid of color and beauty, but a change of perspective can help us see happiness in the things we often overlook.

“The major message I want to give out is that life is a beautiful thing, and we shouldn’t take it for granted,” Naman said. “We may not see it all the time, but the places we are in, the people who are around us, and the everyday things we love—these things are what make life so beautiful for us.”