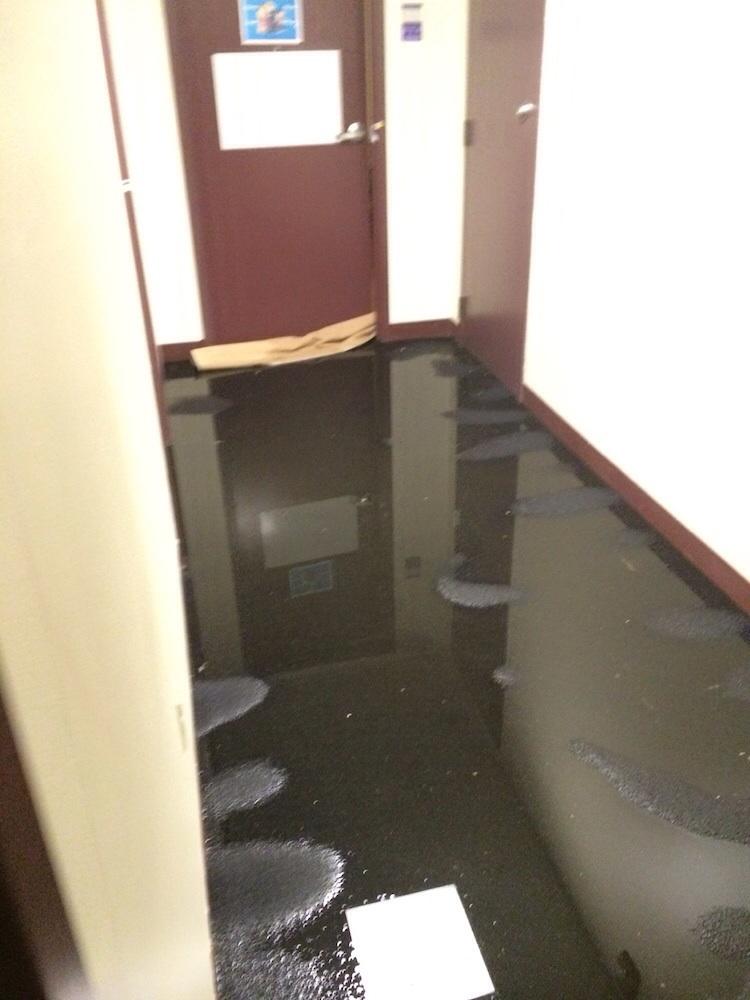 The sophomore responsible for knocking off the top of a fire sprinkler in the Little Building, causing water damage to dozens of dorm rooms, will have to compensate residents for their damaged property, according to David Haden, associate dean of students.

The student, who requested not to be identified because he didn’t want to be publicly associated with the incident, said he knew he would have to pay for the destroyed belongings. He said he was putting on a sweater, and because he is over six feet tall, he inadvertently hit the sprinkler.

“It was pretty stupid,” he said.

Haden said he met with the student and determined the situation was an accident, so the college will not take disciplinary action against him. The college is, however, collecting a list of items that were damaged or destroyed.

Ronald Ludman, the dean of students, wrote in an email to Little Building residents that rooms and suites of about 36 students were affected, to varying degrees, by the water leak on March 31. Most of them were forced to vacate their rooms with their belongings and sleep elsewhere that night.

Haden said most displaced residents were allowed to return to their rooms on Monday afternoon, and by 4 p.m. on Tuesday, all impacted students went back to their dorm rooms.

Haden said floors three through eight, plus an area in the dining hall, were affected by the water.

To the fix the damages, facilities personnel worked on replacing ceiling tiles, shampooing and drying carpets, and repairing and repainting walls.

Jay Phillips, associate vice president for facilities and campus services, said he couldn’t yet determine the costs for the damage. That amount, however, was assumed by Emerson’s Department of Facilities Management, not the student at fault, said Haden.

The Boston Fire Department responded to a fire alarm at 2:11 a.m. and left the campus at 2:41 a.m., after firefighters determined that a water leak caused the alarm to go off, according to Steve MacDonald, a fire department spokesman.

Freshman Brittany Foley, a writing, literature, and publishing major who lives on the eighth floor of the Little Building, said although residents could return to their dorms after about 45 minutes, the fire alarms continued blaring until 4:20 a.m.

Phillips told the Beacon in an email that the horns and strobe lights went on longer due to a circuit board that failed.

“Our contractor made a repair [Monday] evening as well as [Wednesday] afternoon and there was some apparent water damage identified,” he wrote. “The safety of our students is of the highest priority and we will continue to evaluate our systems, response protocols and communications to ensure that we focus on that priority.”

Kathryn Turner, a freshman performing arts major, lives on the Little Building’s seventh floor. Although her room didn’t suffer water damage, she said the constant, loud noise of the alarm almost caused her to faint.

“We couldn’t go back to bed, it was horrible,” said Turner

The sprinkler that set off the alarm is located in room 824C. The resident of 824C whose guest set off the fire alarm said she prefered not to be identified publicly but confirmed her friend hit the sprinkler by accident.

Haden said facilities personnel will continue to visit the affected spaces to make sure no problems develop.

Matt Lewis, a freshman visual and media arts major, said his suite, 724, suffered a great amount of damage. He said water was running through the ceiling tiles in his suite and dripping down the edges his room.

“I heard water pouring onto cardboard boxes at a very intense rate,” said Lewis, describing the flooding that occurred in his suite before he had to evacuate the building in response to the fire alarm. “It came to the point where there was a gigantic sag [of water] over the tiles.”

Lewis said staff from the Office of Housing and Residence Life helped students salvage their property, and made sure those who were displaced had alternative accommodations, like dormitory common rooms or friends’ rooms.

Lewis said he didn’t have anything that needed to be replaced.

Haden said he was glad about students’ understanding of the situation.