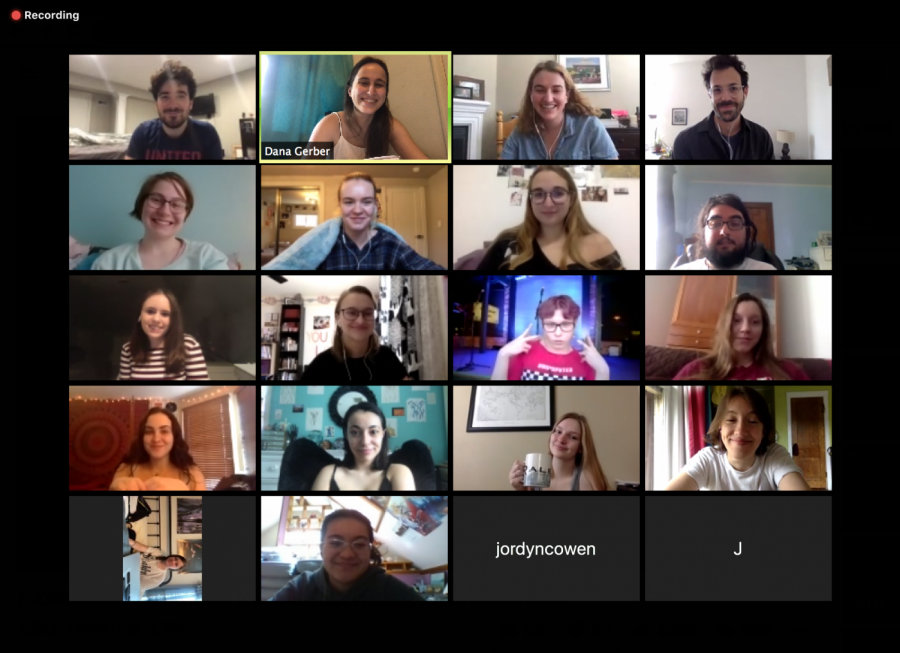 As students prepare for finals, the harsh realities of concluding a semester remotely for the second time this year loom.

Two weeks of remote classes and final exams are all that remain in the semester after in person classes concluded Tuesday. Students and faculty will once again be forced to adapt to a lack of access to on-campus equipment, time differentials, and the fatigue that comes with Zoom classes.

“I think everybody’s energy has been low for the past week and all of us are stressed because we are going back home and we have to stay careful,” first-year performing arts major Rocky Meng said. “We don’t want to bring COVID back home, obviously, we don’t want to jeopardize our families and we have piles and piles of work to do because normally the third week of November is really busy.”

Meng, who lives in Beijing, China, will be staying with a host family in New Jersey until he returns to campus for the spring semester. He said that while he has grown used to attending hybrid classes this semester, moving fully online will affect the dynamic of his theater classes.

“We’ve already had experience with the hybrid model and we’ve had a lot of Zoom classes already, so to be honest I don’t think it is going to be a huge difference,” he said. “I would much rather be in-person because of my theater classes. When everybody’s in the theater you can feel the presence there, you can feel the energy there, but when you’re doing warm-ups or exercises to a screen you’re not really feeling the energy there.”

For many students, this semester will not be the first time they transition from in-person classes to online. Students were forced to move out of residence halls in March and finish the rest of the semester remotely due to the spread of COVID-19 in the U.S. That shift generated an onslaught of new technological, logistical, and emotional challenges for students and faculty.

For students returning home to different time zones, the switch to online-only may force them to attend Zoom classes in the early morning or in the middle of the night.

Junior visual and media arts major Jennifer Van Pelt said she decided against returning to her home in California for the break, in part due to her experience taking remote classes last semester with a three hour time difference.

“I was happy during the first semester and the beginning of the second semester right before everything hit because I had 10 a.m. [classes]… but then they soon became 7 a.m. [classes]because of the time difference which sucks and it was really hard,” she said.

Van Pelt said she will instead be living with a friend in Boston until finals are over.

“On Wednesday when I get kicked out of the dorms I’m moving over to Beacon Hill with my friend who lives there, who is off-campus,” she said. “I’m doing my best to not have to do the at-home learning again because I just remember last [semester] when everyone was adjusting to it and it was brand new. It was just awful. I just didn’t like it whatsoever.”

As a VMA student, Van Pelt said she feels like she’s missing out on hands-on experiences as a result of the shift to remote learning.

“I’m the type of person that has a hard time keeping my attention on a screen and trying to interact with people that way,” she said. “My first production class is being interrupted and it kind of sucks because even though the whole class when we were here we weren’t able to do half as much as people usually are and so I would say I’m a bit upset.”

Van Pelt said she is concerned the college may not be able to reopen for the spring. COVID-19 case totals are currently reaching numbers last seen in April when cases were at their highest.

“At the beginning, I was like okay, I’m confident that we are going to be good,” she said. “But now it’s like why are we handing our keys in when we are going off to Christmas break we never used to do that, it’s kind of like is that a sign? What comes to mind is oh my god they’re going to tell us we aren’t able to come back and I’m not going to be able to have my computer and everything else here.”

Writing, literature, and publishing major Rory Grady will return to his home in California for the remainder of the semester on Wednesday. Grady said adjusting to a different time zone while attending classes from home will be a new experience that he will have to learn to navigate.

“Last semester a lot of my teachers for WLP classes were just like, ‘turn in your papers, we aren’t going to meet on Zoom,’ so this is the first time I really have to maneuver Zoom times,” he said. “I’m really lucky I don’t have any 8 a.m.’s or anything like that, my first class is at two every day, so my earliest class will be at 11 my time.”

Along with having to adapt to a different time zone, Grady said being at home during finals will make it difficult for him to focus on his coursework.

“It’s going to be weird adjusting to home life because I’m so used to taking my foot off the gas as soon as I get home,” he said. “I think that this is going to be the hardest I have to work academically at least in terms of workload so far this year so I think I need to mentally prepare myself for that because I’m also very ready to coast through the rest of the semester and that’s dangerous right now.”

Faculty will have to make adjustments of their own as they prepare their students for remote finals.

“You have to have a Zoom environment where everybody is contributing constantly,” he said. “A lot of students are kind of really pushing back if there are two hours of listening to the professor talk, like as if they are standing in front of a lecture, that just doesn’t work in remote environments, students actually have to be engaged, they have to be actively talking themselves.”

While students attend class from their homes, Freeman will also shift to teaching in a new workspace—his film studio in Boston.

“I am kind of just stuck here,” he said. “I do VR so it’s kind of an escape but it’s hard, I kind of like the artist life, I don’t think it’ll bother me to be stuck in the studio and not be teaching [in-person] or anything,” he said. “It can be depressing and kind of isolating but I’m okay with it for another nine months or whatever it ends up taking. You see it wearing on the students though, certain students don’t adapt so well, they may be engaged in class, but it can be hard to just be sitting there in a room all day.”

Freeman said his students are gaining valuable experience working virtually which will help prepare them for future jobs in the industry.

“As an institution we should use this as an opportunity to adapt to the changing times,” he said. “The entertainment industry for instance is going to know that people can collaborate effectively online, so as our students go out into the real world if they develop these skills then they will be better at it than their peers.”

Visual Media Arts Professor Shaun Clarke said his students will not get the experience of working with their peers in studio spaces on-campus during the post-production of their films this semester.

“Filmmaking is a very resource-intensive medium to work in and part of the draw to come to a film school is to have access to those resources and that doesn’t translate to the [online classes],” he said.

One of Clarke’s students will return to her home in Ukraine and attend classes with a seven hour time difference.

As in-person classes wrapped up this week, Clarke said saying goodbye to his students was the most difficult part of the transition.

“This is not the end of the semester but it felt like an ending,” he said. “In my last class meeting, I made sure that I thanked the students for the work they put in to really making the class a success in the face of all of this uncertainty, in the face of all the restrictions they had on what they could do. I appreciated that and found that in light of all of the changes that we have gone through here that we were still able to pull together a successful semester.”