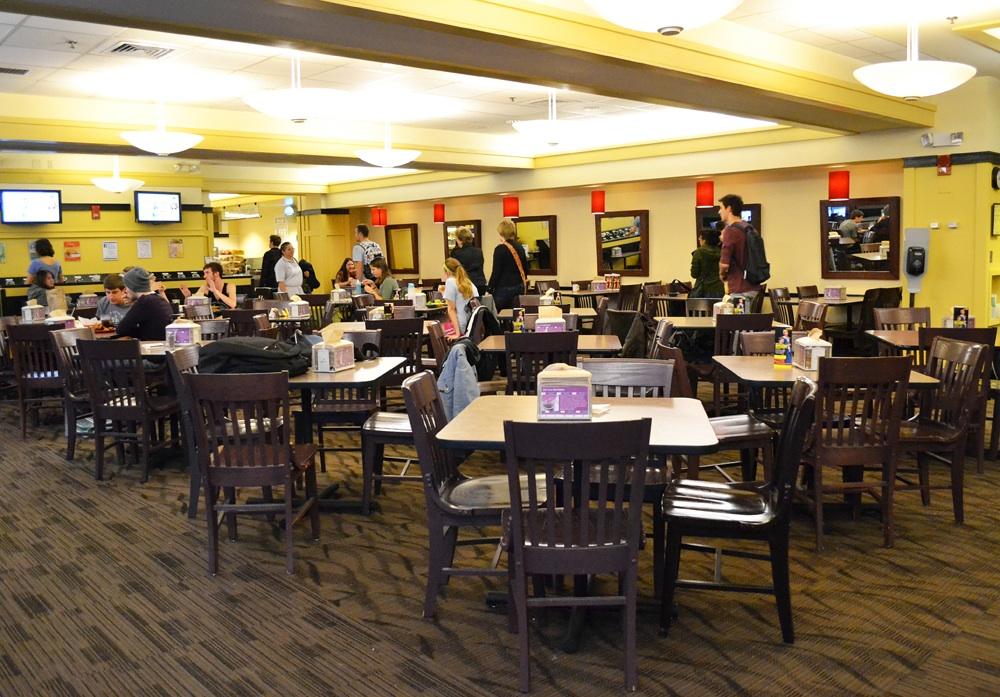 What started as a class project for an Energy and Sustainability course turned into a movement to chop some meat off the dining hall’s menu.

In an effort to increase Emerson’s sustainability and awareness about healthier choices, a group of students proposed “Meatless Mondays,” a plan to exclude all meat products, except for fish and seafood, from the dining hall each Monday.

The Meatless Mondays initiative was put forward by classmates Helyne Adamson, Madeleine Miller, Eileen Neary, and Hannah Wallace, none of whom are vegetarians.

It began as an idea for a greener campus is now an established initiative that both Aramark, the corporation that provides all dining services on campus, and Business Services support.

Leal said adjusting the menu for one day can be easily done.

“Instead of ordering the meats or whatnot, we would change it to ordering more vegetables, more custards, more tofu,” she said.

Adamson said the initiative seeks to reduce Emerson’s carbon emissions by cutting back on the overall purchase of meat.

“This is not a movement to make people vegetarians,” said the junior visual and media arts. “We want to create a better educated student population in regards to what they eat.”

Student organizations, like Earth Emerson and the Student Government Association, are also supportive of the project said Miller, a sophomore visual and media arts major.

Erin Moriarty, co-president of Earth Emerson, said Meatless Mondays is a unique approach in working to become a sustainable community.

“Earth Emerson will definitely help promote this initiative,” said the junior marketing communication major. “It could be definitely the easiest way to do it because it doesn’t take away from your well-being,” she said.

But sophomore Samantha Dupler said she disagrees with the plan.

“I don’t think it’s a good idea. If people don’t want to eat meat, that’s their own choice,” said the writing, literature, and publishing major. “But it shouldn’t be forced on everybody.”

Miller said she hopes the initiative will highlight the benefit of having a lower meat consumption, citing the low quality meat served in the dining hall as an example.

In September 2007, President Jacqueline Liebergott signed the American College and University Presidents’ Climate Commitment, an agreement by a network of colleges and universities in the U.S. to have sustainable campus operations.  The goal of the commitment is to reach carbon neutrality, removing as much carbon dioxide as it is being released to maintain a net carbon footprint of zero, by 2030.

The President’s Sustainability Committee, a group of administrative staff, faculty members and students, was established to promote this goal and weave in a culture of sustainability in all levels of the Emerson community. Moriarty, Mahoney, and Honea, among others, are members of this Committee.

Adamson said another goal of the initiative is to increase awareness about the environmental impact of conventional meat industry. The group plans to distribute table tents and put up flyers and posters around campus. They also have created a survey to gauge student opinion about sustainability measures and forgoing meat for a day.

“I could live one day a week without meat,” said freshman visual and media arts major Alexandra Oberwetter in between mouthfuls of a chunky beef stew.