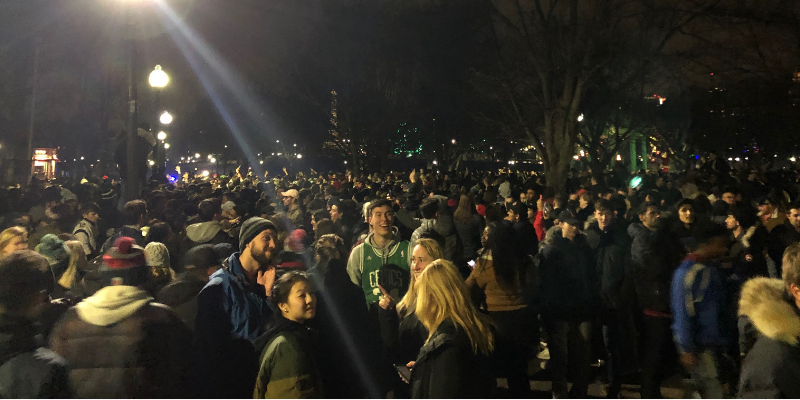 The parade is scheduled to begin at 11 a.m., but crowds will most likely begin gathering early at around 9:30 a.m., Pelton wrote in the email. The Boston Police Department will likely place barriers on both sides of Boylston and Tremont streets and not allow any crossing from the Boston Common side—including to and from Boylston Street Green Line Station, according to the email.

The Emerson College Police Department began preparing security measures for the potential of a celebratory Super Bowl victory parade over the weekend. ECPD Chief Robert Smith said they will lock the exterior doors of college buildings, including the residence halls and the Dining Center, and students will need to tap their Emerson IDs for entry.

The crowd stretched from the Parkman Bandstand to the tennis courts.

Celebrators started arriving immediately following the Patriot’s’ victory against the Rams at 10 p.m. People climbed trees and lamp posts, destroyed park signs, and set off fireworks. BPD arrested a non-Emerson-affiliated individual and charged them with malicious destruction of property and breach of the peace.

Smith said in an interview the college tripled the usual number of officers on Sunday night. The officers stood along Boylston Street and outside of college buildings. The additional officers went home by 1 a.m. due to the crowd’s good behavior, Smith said.

Freshman Elena Freck went out to enjoy the Patriot’s’ victory with friends and stood amid the crowd celebrating.