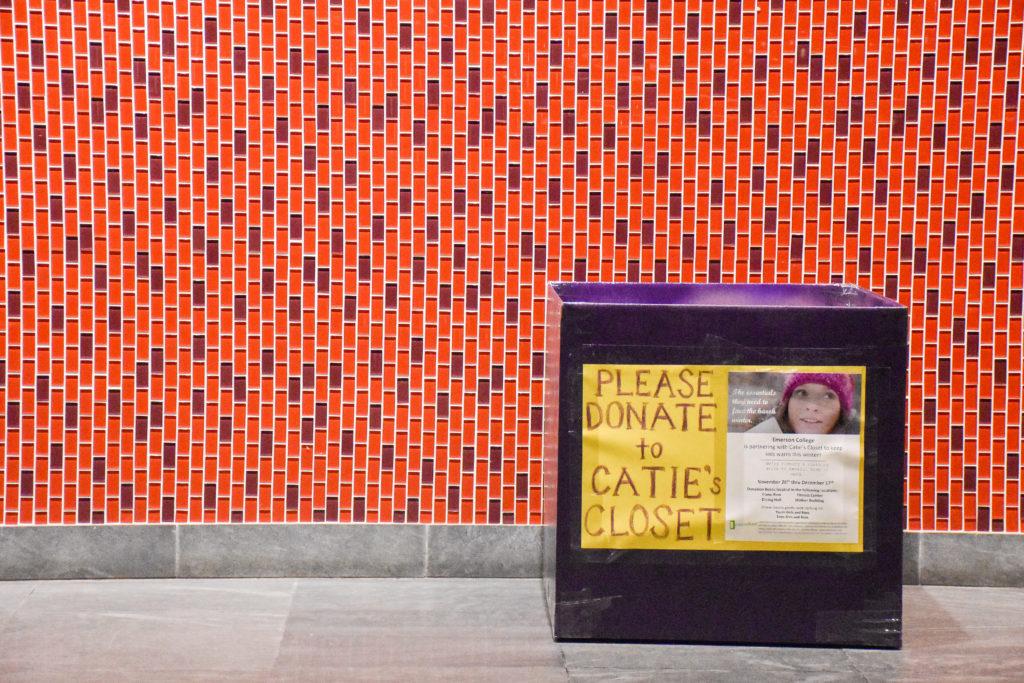 Purple cardboard boxes appeared around campus after sophomore Justin Ventura started a clothing drive for Catie’s Closet, a non-profit that provides clothing and toiletries for children in need.

“I thought, ‘Why can’t we as a community here at Emerson try to come together and help these kids out?’” Ventura said.

Catie’s Closet’s staff goes to schools and fills empty classrooms with donated clothing for kids in kindergarten to 12th grade. Children come in and discreetly pick a week’s worth of clothing. Executive Director and co-founder Mickey Cockrell said the idea for the organization was born after learning her niece Catie went to school with children who were homeless.

She passed away several months after, and Cockrell said her family felt inspired to provide resources these children needed. It now operates within 70 schools and supports 37,000 children in Massachusetts and New Hampshire.

The clothing drive quickly gained momentum thanks to the help of Ventura’s former professor and Emerson’s Director of Nonprofit Communications Cathryn Edelstein. At the end of the first day of the drive on Nov. 26, Ventura said he already collected one and a half garbage bags.

Ventura and Edelstein put the boxes in the Piano Row lobby, the Dining Center, the Iwasaki Library, and the Emerson’s Fitness Center until Dec. 17.

“People head out for winter break, and maybe they’re taking clothes home with them and they see an extra sweater or an extra pair of pants, or maybe even shoes or socks they don’t wear that often that they might want to donate,” Ventura said. “I thought it would be a good idea to run it all the way up until winter break.”

Ventura told Edelstein he wanted to hold a clothing drive at Emerson last year when he took her class. Edelstein said she immediately thought of Catie’s Closet because of a TED Talk Cockrell gave.

“I was so thrilled, when he asked me, to be able to say Catie’s Closet, because they do incredible work,” Edelstein said.

Edelstein said Cockrell told her lack of access to basic necessities is one of the top reasons students miss school.

Edelstein said she introduced Ventura to Cockrell and reached out to the Division of Student Affairs.

“They said he couldn’t do it as an individual—you have to be part of an official club. And you also need a letter from the non-profit saying that they know this is happening, and that there is a date when they’re going to come and collect the marchandise,” she said.

Edelstein said she pushed for the Communications Studies Department and the Athletic Department, since Ventura plays on the men’s basketball team, to sponsor the clothing drive.

“The Athletic Department is supporting him by getting all the athletes involved so that they bring donations in,” she said. “He wanted their support, and he needed my support.”

Ventura then came into Edelstein’s Introduction to Nonprofit Communication Management class this semester to get advice from students on how to efficiently run the drive.

Junior Althea Smith was in Edelstein’s class when Ventura presented his idea. She ended up providing the design for the fliers around campus.

“A lot of my friends, I go into their dorm rooms and they have clothes just spilling out of all the storage, and they don’t even have enough room for everything they have,” Smith said. “I thought that might inspire some people to donate their clothes. I highlighted the fact that they would be having more room.”

Cockrell said they accept and encourage all kinds of gently used clothing donation, but need boys and men’s wear the most.

“I don’t even get to see the faces of these kids yet that get these clothes, and I’m probably not going to ever get to, which kind of sucks, but I know that it’s going to help someone in the end,” Ventura said. “It’s just a good feeling to know that you’re doing something for someone else. You may not know who they are, but they’re struggling, and you just have to kind of keep that in mind.”