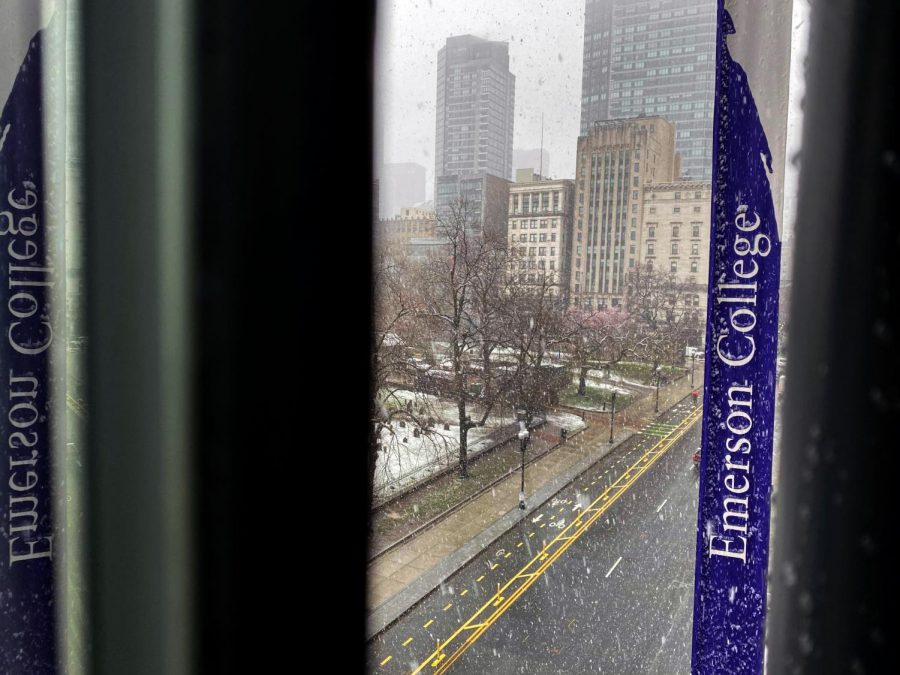 The view of Boylston Street from a Piano Row dorm room as it snows.

For Gloria Natividade, getting a job during the fall semester was crucial to their ability to support themself financially. Yet the process of finding an on-campus job at Emerson proved to be more difficult than expected.

“I had applied to various positions on campus, all which denied me or didn’t even reach back to me,” they said.

Natividade, a first-year writing, literature and publishing major who had received federal work-study funds for the academic year, eventually secured a job at the residence hall tap desks. Nevertheless, they said they felt the college’s hiring services did not make it easy—especially for students with financial struggles.

“I found it to be extremely discouraging, since Emerson runs on a model of helping students find resources and opportunities,” Natividade said.

First-year public relations major Chloe Chee also struggled to obtain an on-campus job, citing problems communicating with employers. Chee applied to around six jobs during the fall semester and said that the response from hiring managers was often delayed.

“I didn’t get an email back for weeks after [a hiring manager] let me know that they would like to interview me,” she said.

Chee said she recognized the communication issues could pose financial consequences for students.

“Although I wasn’t in dire need of a job, some people might be,” Chee said. “Not hearing back from someone can be nerve-wracking for those who really need a job.”

Sage Greenwood, a first-year creative writing major who currently works as an IT help desk assistant, stated that they faced a number of technical issues on Workday, the platform Emerson uses for employment applications.

“It was frustrating because a lot of the times the listing on Workday wouldn’t be closed if the position was filled,” Greenwood said. “They wouldn’t tell you, ‘oh, this position is filled,’ so you’d just wait and not hear anything.”

Christopher Norfleet, the assistant director of student employment, said students should typically be able to see the status of their application on the platform.

“Workday is designed to send notifications if a student has been invited to interview, offered a job, or if the applicant has been declined for the position,” Norfleet said.

Greenwood, however, said some of their applications never changed in status and “stayed open perpetually.” For one job, they realized the listing had been updated to state “Position Filled” although they had never received any communication about their application.

According to Norfleet, not all applications are updated right away if hiring managers receive high interest in a position.

“Rather than declining applicants immediately if they aren’t an exact match for the job, hiring managers will do their best to select applicants for an interview that best fit the position and the department’s needs,” Norfleet said.

Greenwood also noticed that at times, they would search up a job position and find duplicates of the listing dated for a past academic year or semester. The outdated listings made the navigation confusing, they said.

Although hiring managers are told to close job listings if the position has been filled, some listings close automatically while others must be closed manually, said Norfleet. Outdated listings may be due to the fact that they were never manually closed.

“Requisitions cannot be closed until all hired students for that particular role have completed the hiring and onboarding process because closing the job can prematurely end…the remaining tasks,” said Norfleet.