Students find mentors in Board of Overseers 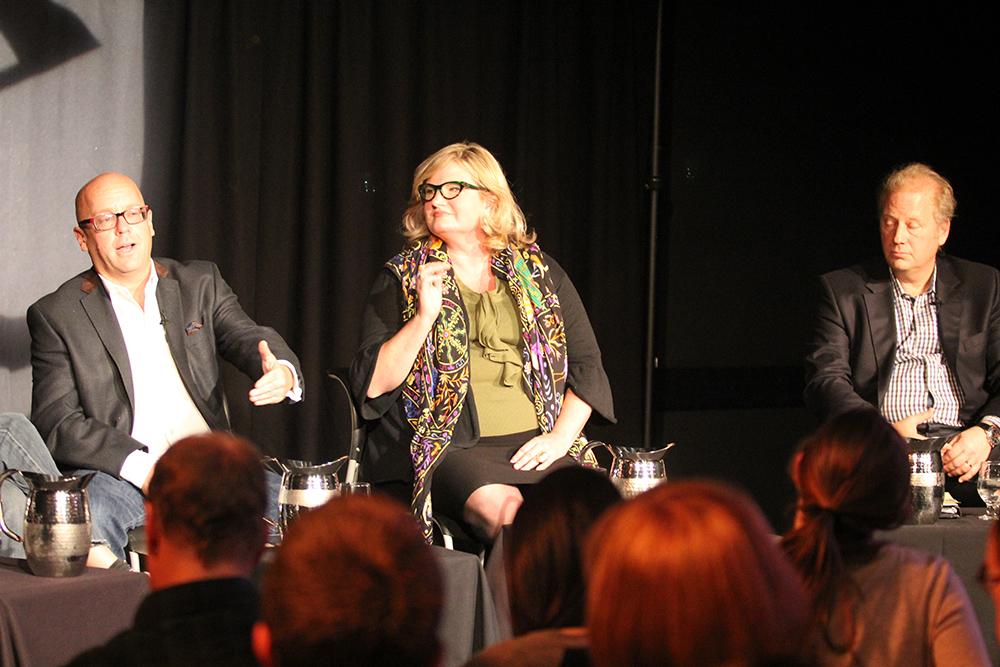 Internships, mentorships, and in-the-field experience: things Emerson students desire. Now, the college is working to enhance a program that offers all of these opportunities together.

According to Andrew Tiedemann, vice president for communications and marketing, the Emerson College Board of Overseers, a group of 25 prominent professionals in the arts and communication industries, is expanding its involvement with the community by increasing its role in the college’s mentorship program, a newly-established Speaker’s Bureau program, and an increased effort to provide students with paid internships.

The overseers’ primary mission is to connect Emerson faculty and students with professionals in the fields that the college represents, said Tiedemann. They can mentor students by offering career advice, or serve as a resource to professors by providing insights on the latest trends in their industries, he said.

Daniel Black, an entertainment attorney at the Los Angeles law firm Greenberg Traurig LLP, is the chair of the Board of Overseers.

“We have people in the board who think with both sides of their brains — business people and creative people,” he said in a phone interview. “We are all in this together for the sole purpose that we are trying to create opportunities for students.”

Melanie Katz, a junior marketing communication major, was paired with Lisa Dollinger, board member and principal of Dollinger Strategic Communications, this semester.

“It is absolutely incredible to have a full lifetime of marketing insight that I otherwise wouldn’t get in college,” said Katz in a phone interview. She said Dollinger has helped her focus her career ambitions.

“Lisa is helping me figure out what career paths will help me achieve my goals,” said Katz.

Dollinger, who joined the board in July 2013, said she has worked for more than 20 years in building brands and growing businesses.

“As a mentor and as an overseer, we stop to listen to students,” she said. “It’s a very enriching experience. I really hope that I can contribute.”

So far, Dollinger has helped two students secure internships in LA, she said.

Erin Farley, a junior journalism major and former Beacon staff member, said that in September she was paired with a mentor—Adam Harding, a news reporter for WHDH, the NBC-affiliated station in Boston.

“It’s good to have a professional look at my work and tell me if it’s good or not,” said Farley, whose concentration is broadcast journalism.

Harding, she said, looks at the scripts and packages she produces for classes and extracurricular organizations.

“They found my perfect match,” she said. Harding is not a member of the Board of Overseers, but was picked for mentorship because he is an alumnus who volunteered to mentor, said Tiedemann.

Members of the board of overseers also help secure paid internships for students, and can participate in a newly-established program called the Speaker’s Bureau. Launched in September, the group allows for faculty to bring overseers into their classes.

Overseers also come together to present in panel events, like the one held on Oct. 24. where four members discussed how new media distribution channels, like Netflix, Hulu, Pandora, and Spotify, are diversifying job opportunities in the TV and music industries.

This year, out of the 25 overseers, 23 are available to participate in the Speaker’s Bureau, 19 said they are willing to be mentors, and 15 said they can help students find internships, according to Tiedemann.

To serve on the board, candidates must be nominated and selected by the Board of Trustees. Members are appointed to the Board of Overseers for a three-year term, and can serve a maximum of three consecutive terms. They also agree to make an annual gift of at least $2,500 to the college, and have to attend all three board meetings each year, said Tiedemann.

Julian Cohen, a junior visual and media arts major, began working with his mentor, Lisa Black, senior vice president of business development at FishBowl Media, in September. He said it’s comforting to have someone guiding him regularly.

“In the past few months, I’ve distinguished what road I should take to succeed,” he said. Black helped him focus on pursuing his passion for producing commercials, he said.

Cohen said he found out about the mentorship program through the Emerson website, and Farley said she became aware of it when staff from Career Services told her about that opportunity.

“It’s a shame that people don’t know about it,” said Farley. “This is the best thing I’ve gotten involved with at Emerson.”

Tiedemann said the Emerson website will soon have a section with biographies of every member in the Board of Overseers, so students and faculty can familiarize themselves with these professionals and their willingness to help. Tiedemann couldn’t provide a timeline of when this section will launch.

Dollinger’s daughter, Calli, graduated from Emerson in 2010. Dan Black is also an Emerson parent — his son Alex graduated in 2007.

Although some members of the board are alumni or parents of former students, according to Tiedemann, they don’t need to have any previous affiliation with the college.

“They just have to be accomplished in the field,” he said.

Carol Spector, director of Career Services, said the mentorship program began in 2005, and every year up to 10 students are each paired with one mentor. She said the overseers originally came up with the mentorship program with the goal of working with students early in college to guide their professional development, even if they weren’t yet sure of their career paths.

Spector said 52 students applied in 2011, the highest number of applicants to the program she has seen since she joined Emerson in 2008.

Before last year, mentors would commit to a two-year relationship with their mentees, and the program was available for freshman and sophomores only. But in the fall of 2012, only sophomores were eligible apply to the mentorship program, and the mentors’ commitment was reduced to one year, she said.

“It was not as easy to get mentors to commit to two years,” said Spector, “and students were more ready to work with a mentor after their sophomore year.”

After this change, her office received about 30 applications last fall.

Five students have already been paired this year, but the new strategy’s intention is to pair every overseer who is available as a mentor with a student, even if the student’s field of interest doesn’t match the mentor’s discipline, according to Tiedemann.

“There’s no reason why we couldn’t have a student be mentored by an overseer and just get advice on how to get work on your resume, how to network, what employers are looking for right now, even if they are not in your field,” he said.

Sandra Goldfarb, a member of the board who graduated from Emerson in 1978, is senior vice president of Rasky Baerlein Strategic Communications, a public relations, lobbying, and public affairs firm based in Boston and Washington DC. She said the company is an Emerson-friendly place, noting that several of her co-workers are also alumni.

“That is something that I focus on, making sure that Emerson students are welcomed here,” said Golfarb. “I think that internships are a big part of an Emerson education.”

Golfarb said Emerson classes have visited her company’s office in downtown Boston, and several students have interned with the firm.

Tiedemann said that a connection to internship opportunities is an important part of the new overseer strategy.

“We are working hard with [overseers] in identifying how they can help us secure paid internships,” said Tiedemann.

Tiedemann said that of the 25 overseers, seven are in the Boston area, six in Los Angeles, eight in New York City, two in Florida, one in Atlanta, and one in Texas.