Students immerse themselves within world of cosplay 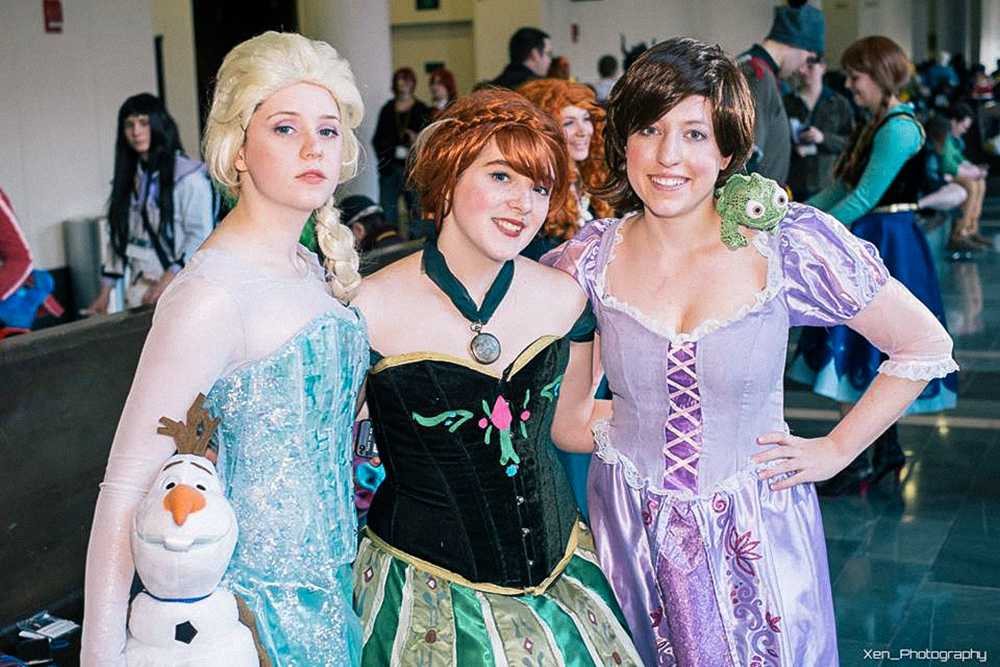 Senior Allie Eibeler swears by her fabric tack. When it comes to her cosplay endeavors, such as painstakingly attaching individual sequins onto a corset, she said this glue has been invaluable.

“Fabric tack is your best friend,” the performing arts major said. “It’s also the devil, because it gets everywhere.”

According to Simon, a junior performing arts major, their whole group, which also included friends dressed as Kristoff  and Prince Hans, from Disney’s Frozen, frequently got stopped while at Anime Boston to be photographed.

“It was to the point where we couldn’t move,” Simon said. “We tried to go somewhere, but so many people were asking for our pictures that we just had to stand in one place for 45 minutes.”

D’Isa said that they dubbed this the “park and bark”—the opposite of walk and talk.

“That meant, ‘Everyone, stop and pose, because we’re going to be here for a little while,’” the freshman interdisciplinary major said.

The most intricate costume that Eibeler has come up with to date, she said, is her Elsa costume. This attire involved sewing a cape out of blue tulle and glittering it, drafting a pattern for her skirt and piecing it together, finding shoes, a mesh shirt, and a blonde wig, and cutting out individual sequins from plastic bottles and tacking them onto a handmade corset.

According to Eibeler, this type of dedication to perfection and accurate representation is one of the main reasons Eibeler loves cosplay so much.

One of the outfits that Simon has made includes elements from Doctor Who as well as Star Wars. She said that it took nearly two months to complete, as it was a six-piece costume with a petticoat, a flair skirt, an under corset, a corset overlay, and a jedi cloak with a floppy hood, all of which she made by hand. However, Simon said that she’s not sure what it feels like to be finally done with such a huge undertaking, for she’s always looking to perfect her work.

“To be honest, my handmade costumes are never quite finished,” she said.

Making garments for fictional characters and dressing up as human characters for which clothes can be purchased from retailers are two different ends of the cosplay spectrum, according to Eibeler. Once, when looking for a specific shirt to dress as Amy Pond, the first companion of the Eleventh Doctor from BBC’s Doctor Who, Eibeler said she found it on eBay after two months, lost the bid, and found another shirt six months later that was too expensive. Four months later she finally found the right price for the perfect one after a year of searching.

“It’s a scavenger hunt,” she said.

When it comes to helpful tips and tricks regarding how to make certain costumes and what fabrics to use, Eibeler said that the online cosplay communal is incredibly helpful.

“The cosplay community is so wonderful,” she said. “I adore them. I’ve made so many friends just because they’re fellow cosplayers. It’s a super supportive community.”

She also said that the fandoms she meets in person at conventions are just as inclusive. Being able to play a character’s role alongside others from within the same show or movie allows her to embrace a part of herself she doesn’t usually get to.

D’Isa said that while cosplayers get stereotyped by misrepresentations such as the SyFy show Heroes of Cosplay and hypersexualized images of women in catsuits, the reality is that cosplayers are a diverse group from all walks of life who have an affinity for celebrating their favorite characters in common.

“Cosplay is having a passion for something so much that you want to immerse yourself into that world,” she said. “Whether you’re someone who is new to cosplay and just buys a t-shirt and jeans to be L from Death Note, or a person who puts hundreds of hours in a Gundam costume, that’s what cosplay is—its loving it so much that you put all of that work and love into something and share that with other people.”