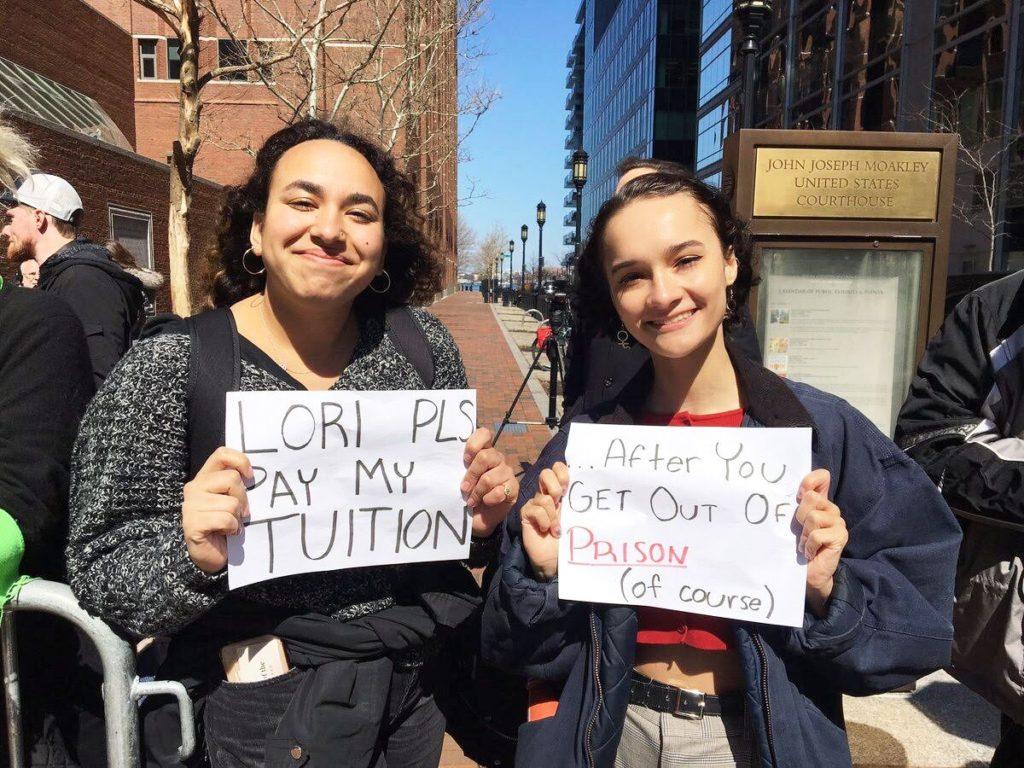 A pair of students joined a press frenzy outside of a Boston courthouse where charges from a nationwide college admissions bribery scandal were being heard on Wednesday, but instead of desiring a photograph or a live shot, the students sought tuition money.

Sophomore Mackenzie Thomas and senior Vivi Bonomie went to see Hollywood actresses Lori Loughlin and Felicity Huffman appear at a Seaport courthouse for their cases involved in the college admission scandal. The actresses entered the courtroom to face a federal complaint released on March 12 that accused dozens of parents, college officials, and coaches of engaging in bribery and cheating to admit multiple students into prestigious schools.

“We have been obsessed with the story since it broke in March,” Thomas said. “I started doing research, and I heard the hearing was in Boston, so we were like ‘We are going to go.’”

Loughlin and her husband Mossimo Giannulli allegedly paid bribes totaling $500,000 in exchange for their two daughters to enter the University of Southern California rowing team as recruits, the criminal complaint said. Neither of the daughters plays the sport, according to the document.

Huffman, known for her role as Lynette Scavo on the ABC television series Desperate Housewives, allegedly paid $15,000 for her eldest daughter to participate in the college entrance exam cheating scheme, the criminal complaint said.

Thomas and Bonomie used printer paper and dry erase markers to make two signs to hold in front of the courthouse as the actresses walked past them. Bonomie’s sign read “Lori pls pay my tuition,” and Thomas’ sign read “after you get out of prison (of course).”

“We literally did [the signs] on a whim,” Bonomie said. “We just wanted her to pay our tuition. Obviously, we know she won’t. The whole thing seems so funny to us that she would really risk prison to get her two daughters into school.”

The situation appeared especially humorous to the senior and sophomore, given Loughlin’s role on the Full House TV series.

“She is like the moral compass of that show. Becky is a very moral person. I can’t believe [Lori] would do such a backdoor, dirty thing,” Thomas said.

Several media outlets interviewed the students, including the Boston Globe and Fox News, as Thomas and Bonomie were the only students with signs protesting the celebrities.

“By the time [Lori]  got out of the car and to the courthouse, it was about 30 seconds,”  Bonomie said. “But the rest of the time it felt like we were the center of attention—everyone was taking pictures and asking for our names.”

Thomas recorded a video while Loughlin walked past her as she shouted to ask the actress to pay her college tuition—the video posted on Thomas’ Instagram garnered over 900 likes and 100 comments as of April 4. A local journalist also posted a tweet featuring the students and their signs.

"We're obsessed with this case… It's ridiculous celebrities are getting away with this," Thomas told me. Said she and Bonomie worked "really hard" to get where they are. pic.twitter.com/XRjNDuNM4w

“I love comedy, I love making stupid, little videos—I’ve been doing it since I was a freshman in high school,” Thomas said. “Of course, the one thing I put 10 seconds of my life into is going to be the thing that blows up.”

Buzzfeed News and TIME Magazine also used a picture of Thomas and Bonomie in tweets about the scandal.

“I opened my phone and saw [the Buzzfeed post], and I was like ‘this is unreal,’ I was laughing so much,” Bonomie said. “It will be interesting to see if any television stations feature us.”