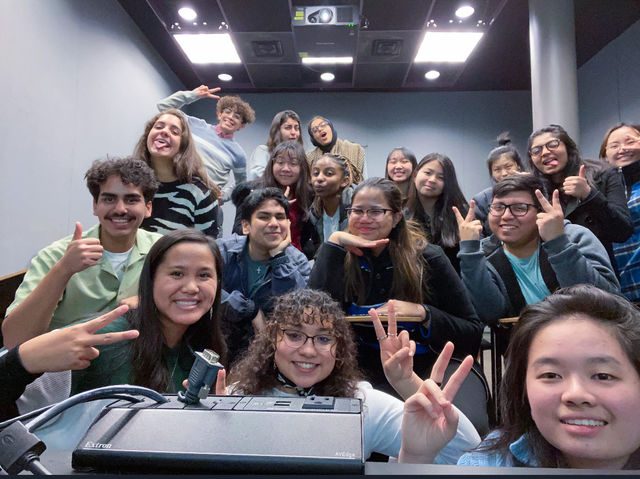 When Emily Cristobal realized that she was one of the few minorities in her honors program, she wondered if she was being “tokenized” because of her ethnicity.

“All the white kids, I just thought were so much smarter than me, because they came from these great schools that had great educational programs,” Cristobal said. “I felt like they only put me in the program because I am brown and I am from Hawaii and I tick off the minority boxes.”

Now, as a senior, Cristobal began creating a four-part documentary series called “Beneath the Surface” with Emerson Channel to represent the narratives of other Emerson students of color and their experiences at predominantly white institutions. Cristobal is one of three executive producers on the show, including Gabriella Leonel and Brenda Herman.

The crew, made up of entirely students of color, is in its beginning stages of production. Cristobal said they plan on filming interviews within the next two weeks for their 10–15 minute episodes.

“Just doing interviews for crew hiring and meeting so many incredible freshmen that have felt the way we have felt at times is so heartbreaking,” Leonel said. “And it is so heartbreaking to see the way that our community continues to unconsciously affect students who just came here who are already thinking of transferring because they feel as though their skin color is showing in their classes because they walk around and everyone is white.”

Cristobal and Leonel said white students in particular make up their intended audience, as the series is supposed to be educational. However, they hope everyone, including other students of color and faculty members, watch the series as well.

“Having this conversation and being able to talk about these issues is the only way that we can hopefully change the perspective of other people,” said freshman Jose Barrera-Aguirre, member of the concept development team.

The themes of episodes will vary depending on the interviews. Leonel said they hope to touch on experiences of feeling unwelcomed and pressured to represent minority communities.

“It’s often really hard, especially for students of color, to be those voices and say those things, because as much as you want to feel comfortable with white students, there’s a disconnect,” Leonel said. “It’s hard to say something to those white peers that you love and you care about because you don’t want to feel like you are attacking them or damage your relationship with them.”

Leonel said she felt she was at a disadvantage compared to her fellow white students from higher socioeconomic backgrounds who came to Emerson with full resumes.

“I think students at Emerson are afraid of acknowledging their white privilege, and their white fragility,” Leonel said. “White students are often very scared to admit that they have money, very scared that they come from a way more advantaged situation. Use your position that is more advantaged as a way to help other students and recognize biases. Some students need to be taught how to use a camera in their freshmen year.”

Emerson is known for being one of the top ten most inclusive universities for LGBTQ+ students, according to the Princeton Review. Leonel believes the college hides behind this fact in order to not acknowledge the school’s diversity problems. Leonel said this is particularly noticeable when students react to misgendering, but not racial microagressions.

“We are all very quick to be a good ally in that sense but again there is a difference between queer ally-ship and racial ally-ship and white ally-ship specifically, and it’s not the same,” Leonel said.

Due to Emerson’s lack of diversity, Leonel said she is often grouped into one community, even though students of color come from all different backgrounds. They hope to combat the single narrative by including as many different voices of color as they can.

“I can’t find a Latinx person that identifies with the same things I do, being from the United States from a lower socioeconomic status and immigrant parents,” Leonel said. “It’s just important to keep in mind that everyone’s narrative is different and everyone’s story is different and even within our own communities we can feel left out too.”

Cristobal said students of color responded positively to the project and expressed a desire to have more awareness raised around the topic.

“Every time I hear that, a little part of me just hurts because it is sad that it has taken this long for something like this to happen but also so happy that we are the people starting this,” Leonel said.