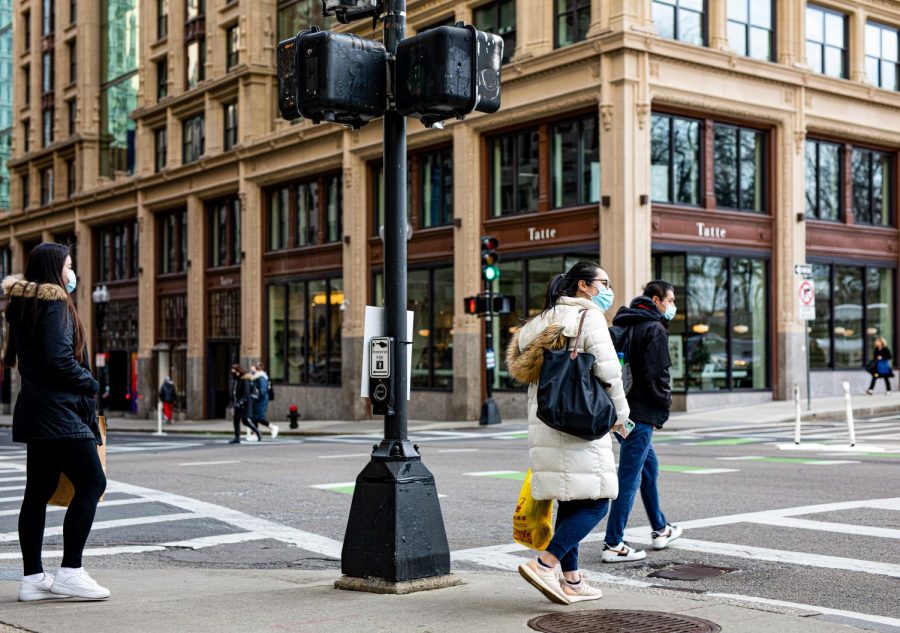 People walking through the intersection of Boylston and Tremont street.

After college officials announced last week that tuition, room, and board rates would be rising two percent for the second year in a row, students expressed indignation at what they see as an unfair financial obligation as the pandemic continues to ravage the economic standing of Emerson students and their families.

The tuition increase, which amounts to $1,025.28, is equivalent to the hike set in place for the 2020-21 academic year in July, and follows over a decade of steadily increasing costs at the college. The raise is in part due to the college’s financial COVID-19 related losses—now projected to be about $30 million during the 2021 fiscal year—according to a March 18 email from President M. Lee Pelton and Chair of the Board of Trustees Jeffrey Greenhawt.

“So far we’ve been lucky that we have lost less than we thought, but there’s still been losses,” Vice President and Dean of Campus Life Jim Hoppe said in a Zoom “COVID Q&A.” “There have been quite a few cuts to different programs and services that people are going to want to have reinstated.”

One student, who chose to remain anonymous for fear of retribution from the college, is recruiting students through Instagram for a strike against the tuition increase—demanding Emerson undo the raise or give students a clearer sense of what the extra funds are used for.

“It lights a fire under Emerson’s ass and makes them realize that they’re gonna lose a lot of revenue, and they’re going to get a lot of bad publicity, which I think are two things that Emerson really cares a lot about,” they said.

Hoppe said it was necessary for the college to be able to set aside money in next year’s budget for faculty and staff raises, benefits that were slashed to ward off significant losses as the pandemic took hold.

“It would be very difficult for the college not to have a tuition increase and still have raises for faculty and staff,” he said.

Negotiations between the staff union and the Board of Trustees to regain the raises and other benefits have not produced any changes to date. The college’s budget for the next fiscal year has not been solidified, according to Hoppe.

Emerson is heavily reliant on tuition for its revenue—with 89 percent of annual revenue coming from those costs according to the college’s financial statements.

The student who is spearheading the tuition strike said part of the campaign is to determine specifically where the profit generated by the increase is going. The email from Pelton and Greenhawt listed several recent initiatives, such as five new classrooms with updated technology and new full-time faculty hires.

“When they just say, ‘Give us two percent more, just trust us money will go somewhere,’ we know that that money is going to administration, to the president of the college, to the people at this college who make money and profit off of this,” they said. “[It’s not going] to the people who actually put the work in, our teachers, the dining hall staff. That’s the biggest insult of this whole thing is the fact that they can [raise tuition] and continue to not deliver.”

Even if the tuition strike does not succeed in abolishing the hike, the student said, they still want the college to be more transparent with the uses of student funds.

“We at least want to use this power as momentum to force them to accomplish other things that actually benefits students and actually fulfills Emerson’s promises to us,” they said.

The decision to raise tuition once again comes more than a month after Emerson announced it will once again hold in-person classes under its hybrid model during the 2021 fall semester.

“The problem is really the principle of the matter,” the student who leads the tuition strike said. “At any college the whole point of paying is the college experience—which is community activities, [and] all these different things that you can’t do [during] COVID—and now the college has the audacity to ask us for more money for objectively less.”

Pelton and Greenhawt indicate in their email that Emerson will work to offset the monetary impact of the increase for students with “demonstrated financial need and/or changing financial circumstances.” The email directs students to an “increase off-set fund,” where they can submit an appeal to the Office of Financial Aid on or after June 1 to be considered for additional aid to mitigate the tuition hike.

Hoppe added that the college will continue its efforts to increase financial aid to students most affected by the tuition increase.

“We made a really concerted effort to not only raise financial aid for those entering but for those returning, because that’s always been an issue too in terms of tuition, [it] would go up but perhaps your financial aid would stay similar to what it was when you were admitted,” Hoppe said.

Samantha Herrmann, a first semester senior journalism major, said she thinks the tuition hike is both economically and psychologically harmful for current students.

“There’s definitely a lot of problems that accompany that tuition increase,” she said. “Especially if you’re budgeting at the beginning of your college experience, and then they keep raising the tuition that you didn’t account for.”

“Financial [stress] definitely can impact your ability to be successful in school and classes as well,” she continued.

Correction: A previous version of this article said students had to apply for the tuition increase offset fund by June 1. The article has been updated to reflect that students should apply on or after June 1.