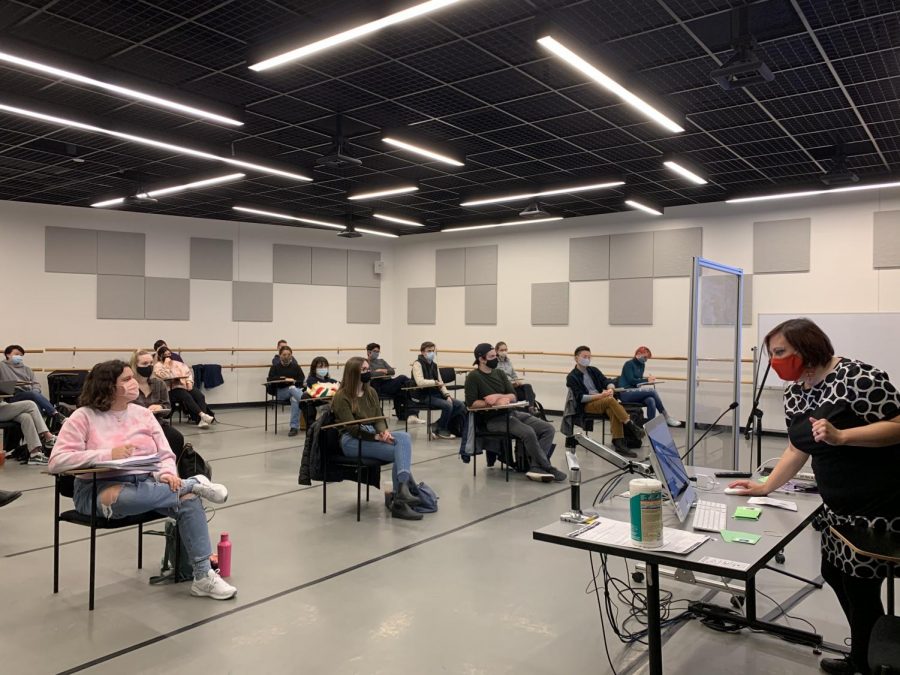 A meeting of professor Nancy Allen's Plagues and Pandemics course in the fall semester.

For the first time since November, students are returning to classrooms after beginning the spring semester with two weeks of online courses. The transition comes amid Emerson’s soaring positive COVID-19 tests, the looming threat of more transmissible COVID variants, and continuing city capacity limits that the college is permitted to exceed.

Monday’s snowstorm put off the first day of planned in-person classes. However, hordes of students emerged Tuesday from their routine of Zoom classes to sit masked in distanced, retrofitted, and sanitized classrooms across campus, a new normal first encountered last September.

“After the soft quarantine we had this week I’ve been itching to go out,” Nick Powell, a first-year visual and media arts major, said. “As long as the school is taking the precautions, then in-person classes are going to be good.”

The first two weeks of the semester were moved online in an effort by the state to put more space between the holidays and the beginning of in-person classes. The remote run-in period was meant to “safely rebuild our Emerson bubble and help limit the risk of exposure of our community, but also to the Boston community,” Erik Muurisepp, assistant vice president for campus life and “COVID Lead,” said in an interview.

To date, Emerson has reported 43 positive COVID-19 tests among students, staff, and faculty in the spring testing cycle, which began on Jan. 11. The positivity rate sits at .47 percent. Through the end of the first week of in-person classes in the fall, the college had reported 10 positives, and a positivity rate of .10 percent.

Despite some students’ excitement to return to the new status quo of six-feet-apart desks, professors behind plexiglass, and masked peers, the risk of transmission appears substantially higher in the Emerson community than it did when fall semester in-person classes commenced.

Some Boston area schools, like Harvard University, have opted for completely online learning this semester. Muurisepp said online learning was never considered for Emerson’s spring semester. The college’s contact tracing program found no classroom-based transmission of the virus in the fall, even when students who were infected attended an in-person class, Muurisepp said.

“Professors don’t need to have students in person for classes to function properly,” Chloe Nanian, a creative writing sophomore, said. “I feel like a lot of problems would have been solved if the school just didn’t reopen for the semester and just put everything on pause, especially with the rising cases and the new strain of the virus.”

In Massachusetts, officials have identified five cases of B.1.1.7—the variant first discovered in the United Kingdom—which is believed to be at least 50 percent more transmissible than the strains of the virus currently spreading, and could become the dominant strain in the U.S. as soon as March. Though cases in Massachusetts have declined to about 3,000 new cases a day after spiking following the Christmas holidays, the variants may hold the potential to reignite the pandemic.

Nanian said it may have been better to move majors like hers, which aren’t especially hands-on, to a completely online format.

“They could have had the same regulations they have right now, but with a fraction of the student body on campus,” Nanian said. “It would have been a lot better in my opinion, just because there wouldn’t have been a massive influx of students.”

Despite participating in the hybrid model, she said the classroom set-up left much to be desired in terms of safety.

“All the classes I had last semester had about 30 students in each class, and that was the max generally, even before COVID,” she said. “All of the seats were not even four feet apart from each other. I could probably stick one arm out and it was maybe three feet—not even—away.”

Chris Rohrer, a senior communication sciences and disorders major, said most of his classes would work well in the online-only format.

“It doesn’t make sense that we’re going back as things are continuing to get worse,” he said.

Though the Centers for Disease Control and Prevention cite completely remote learning as the lowest-risk scenario for schools, de-densified hybrid learning with students spaced six feet apart carries only “some risk.” However, this doesn’t take into account immunocompromised students and professors, for whom remote learning might be the only option.

Despite progressing to Phase Three, Step One of reopening on Feb. 1, indoor gatherings in the city are still capped at 10 individuals. However, institutions of higher education are excluded from these limits.

Junior Visual and Media Arts major Grace Cosgrove said the combination of frequent testing, mandatory masking, and distance from other students—among other precautionary measures—make the classroom atmosphere a relatively safe one.

“Zoom’s getting very tiring and very repetitive, and so I’m more excited than nervous to be in a classroom setting again,” Cosgrove said. “In classroom settings, I just have to put my faith in other students and just hope that they’re being safe and they’re getting tested to not put anybody else at risk.”

Powell, the first-year Visual and Media Arts major, said other campus environments are what stokes his fear of transmission.

“Things that make me anxious are standing in line in restaurants that use Board Bucks,” he said. “Things that technically we were already allowed to do at this point are a little bit more nerve-wracking for me than going into the classroom will be, at least right now.”

The deadline to switch modalities through the Registrar’s Office, either from hybrid learning to online-only or vice versa, was Jan. 25. Undergraduate students are not allowed to mix classes in different modalities.

“I don’t know why there was a deadline for that,” Rohrer said. “If things keep getting worse, then people might get more nervous as time goes on and then decide they want to be all online.”

First-year Madeline Thorpe said she is more worried about behavior outside of in-person classes—like holding dorm gatherings or eating unmasked in the Dining Hall—than within them.

“If everybody who’s attending in-person classes is responsible while they’re in the classroom and while they’re out of the classroom, then we can manage this safely,” she said. “It’s really on everybody’s shoulders to just be smart and be considerate.”