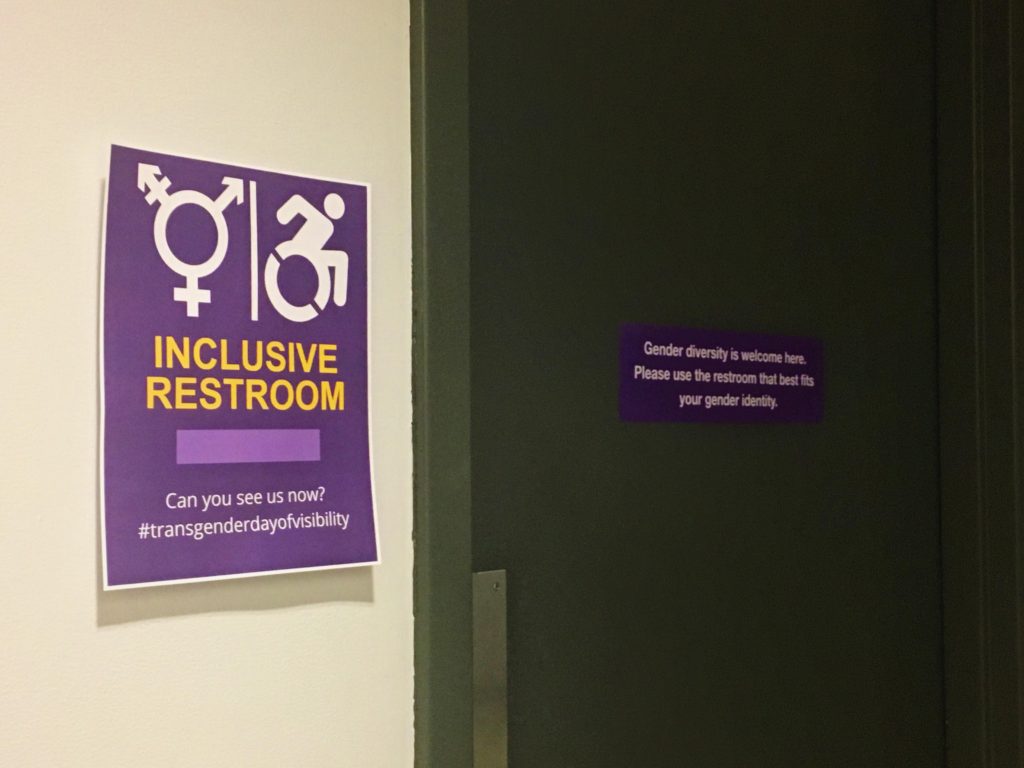 Lauren Lopez, tired of the limited number of gender-inclusive restrooms on campus, decided to act. They gathered five friends, printed out about 75 paper gender-inclusive signs, and posted them on every restroom they could access Friday morning, a day before International Transgender Day of Visibility.

Placed over the gender specific restroom labels, the purple paper signs include the symbols that are on the college’s gender inclusive restrooms with the words “Can you see us now?” and “#transgenderdayofvisibility.”

“To frame [the signs] around Trans Visibility Day is really giving it more of a platform to stand on than ‘hey, we’re students, we’re angry, and we’re going to post these signs,’” they said.

While Lopez is the vice president of the Emerson’s Alliance for Gays, Lesbians, and Everyone, the paper signs were not done by the organization—this was all spearheaded by Lopez.

Lopez said they have been in conversation with Facilities Management and Vice President of the Social Justice Center Sylvia Spears about increasing the number of inclusive restrooms on campus.

“It is taking a while and not going anywhere,” Lopez said.

Two years ago with the help of EAGLE, the college flipped, or changed, 10 multi-stall gendered restrooms to make them gender-inclusive. The college also put up the purple “gender identity is welcome here. Please use the restroom that best fits your gender identity” stickers on doors of the restrooms with an assigned gender. Since then, no more restrooms have altered.

“To me, that’s still not a lot being flipped. And there were only a few flipped when it first happened and that was two years ago,” Lopez said. “Now, after two years, they’re flipping a few more, so what? Is this going to be a like a 10-year process where we only flip a couple every few years? I’m graduating in a month and a half … I’m just tired that this is something that future EAGLE eboards will always have to have on their radar.”

Spears said she believes in the power of students using their voices to bring attention to issues.

“[EAGLE is] asking for the whole campus to be flipped. I’m not sure that will be likely to happen in the short-term, but I think they raise a very important issue,” Spears said. “The college will never move as fast as students think it should, because students’ time is limited. Students want to see change, [and] Lauren wants to see change before they graduate.”

Senior Beverly Bates, a trans woman, thinks a lot of cisgender people, those whose gender identity and sex assigned at birth match, at Emerson, don’t analyze the gender label on restrooms. She said she thought the paper signs forced people to live the trans experience—if only for a moment.

“I usually use the women’s restrooms and I paused for a moment because I did not know which one was the ‘women’s’ restroom,” Bates said. “It made me realize that a lot of cis people that are not trans don’t really know what it is like to really have to carefully select their bathroom.”

Lopez said they hope the conversation about trans rights doesn’t end after the signs get taken down, if they do.