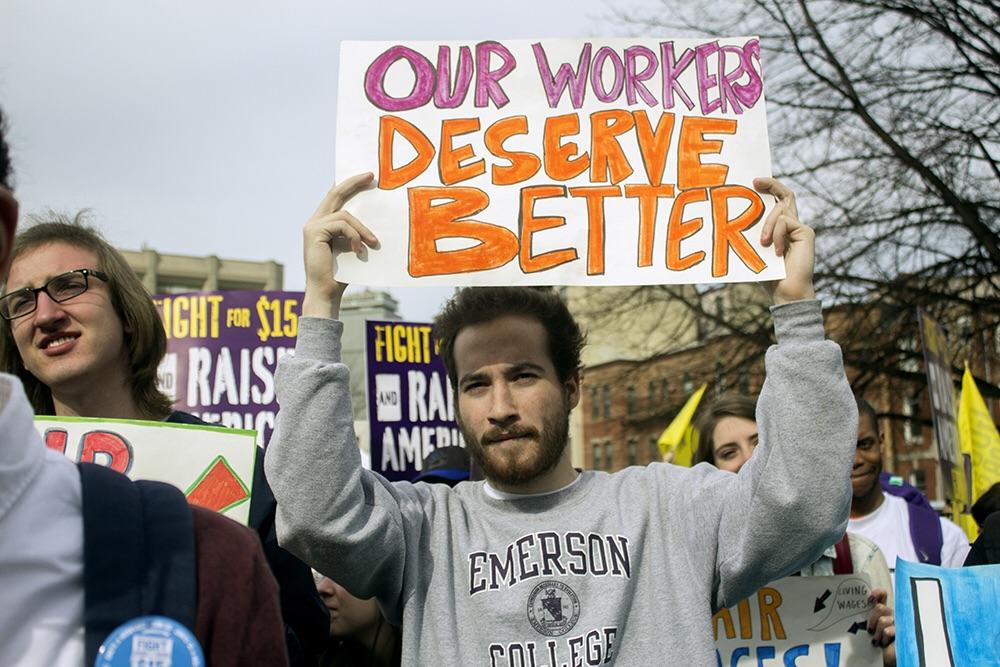 Advocates for raising the national minimum wage to $15 marched in Boston on April 14, including several Emerson students, some of whom were part of the campus group Progressives and Radicals in Defense of Employees, or PRIDE.

The participants in the march—set up by a group called the Wage Action Coalition—traveled from Northeastern University to the AMC Loews movie theater across from Boston Common. It was in solidarity with a nationwide series of rallies planned for the following day; organizers told the Boston Globe it was a day earlier to avoid coinciding with the anniversary of the Boston Marathon bombing.

At the demonstration, part of a campaign titled Fight for $15, there were around 5,000 marchers, according to the organization’s website.

Nicki Morris, a co-founder of PRIDE and a marshal at the event, said PRIDE organized Emerson student participation through Facebook. Morris, a senior marketing communication major, said marchers attending the event came from multiple campuses around the area, including Harvard University, University of Massachusetts-Boston, Boston University, and Northeastern.

Sophomore Michael Vitz-Wong, a member of several organizations outside of Emerson advocating for the Fight for $15, said that the campaign has been gaining support for the past few months.

“[The Fight for] $15 has been spreading around the nation, and it was about time we got everyone fighting for it,” said Vitz-Wong, a visual and media arts major.

“The federal minimum wage of $7.25 is not a livable wage. People can’t pay rent on that,” Vitz-Wong said. “Economic arguments put aside, morally, it’s not right to pay people less than 15 dollars an hour.”

Junior Maria DiPasquale, a member of Emerson PRIDE, said student involvement in the movement would be a vital factor in the campaign’s success.

“We believe that students and workers together is the only way social movements are going to proceed,” said DiPasquale, a writing, literature and publishing major. “Students have always been part of social movements in America.”